xandrex wrote:Nice building. But you'd think they'd want some form of service/retail in the building. Pretty much every building downtown has a coffee shop of some kind, which is pretty useful.

It will be connected to the Wells Fargo building at the skyway level which will have retail.

My building has a Caribou Coffee and is connected to a building with at least one coffee shop by skyway. What of it?

I'm not saying every building needs retail. But it's actually a really nice perk to not have to wander far to go grab a drink or some other service. I won't shed any tears if this stays as-is.

nordeast homer wrote:Not every corner needs retail. If we can't support retail on Nicollet Mall what makes you think this area would support it? If there is already retail being built in the skyway and a Trader Joe's across the street maybe it makes sense to let it play out. There are going to be other developments in the neighborhood, let them put in retail if it makes sense.

retail here and there, close to employment and housing, can do well, unlike a pedestrian mall, which is a different animal. A coffee shop there or some other small shops would be a great addition. I work in the North Loop and retail over here seems to be doing well.

It's too bad that it's impossible to convert ground level office space to retail.

MNdible wrote:It's too bad that it's impossible to convert ground level office space to retail.

Is it? Or is that sarcasm?

Yes, sarcasm. If demand warrants it, it should be a minor effort to swap it out. Given that the Red across the street will have a cafe, etc., it makes sense to me to hold out a bit too see what the demand for retail will be.

Perhaps a museum, curling rink or water park could go here? I hear we need more of these things.

grant1simons2 wrote:I've always thought that arches age poorly with faux historic buildings. But we'll see with this one.

Yeah me too, not really a fan of these imitations of old buildings.
Meet me in Wells

Or like a bike shop? Basically non-existent downtown right now.

I'm fine with imitations of old architecture, just arches can be hard.


grant1simons2 wrote:I'm fine with imitations of old architecture, just arches can be hard.

Arches are difficult to recreate as if they've been there for the past 100 years? I'm not sure what it is, but I can tell when an arch has been rebuilt. The way they were built likely had something to do with that.

next door to this 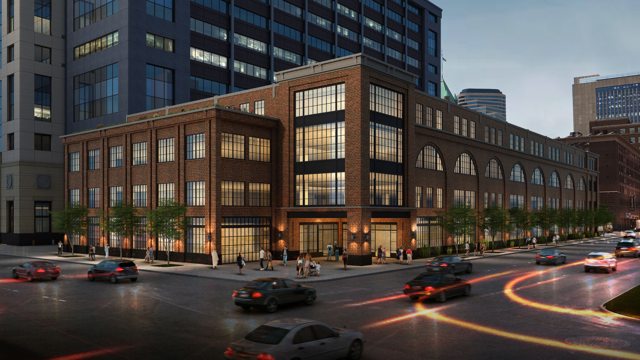 is actually going to be a really neat contrast in styles.
The problem with being an introvert online is that no one knows you're just hanging out and listening.

I like the arches, but it might look better if the entire arch was all window (Or filled in like the big corner windows) instead of being broken up by so much brick at each level.

I like how both of these look, and especially how they'll look across from one another. This is shaping up nicely.

grant1simons2 wrote:Arches are difficult to recreate as if they've been there for the past 100 years? I'm not sure what it is, but I can tell when an arch has been rebuilt. The way they were built likely had something to do with that.

Sounds like you are identifying a craftsmanship/budget problem. I can agree there.

grant1simons2 wrote:Arches are difficult to recreate as if they've been there for the past 100 years? I'm not sure what it is, but I can tell when an arch has been rebuilt. The way they were built likely had something to do with that.

You're probably referring to the detailing of the arch itself. I imagine it's quite a bit of effort (i.e. cost) to recreate the way vertically-oriented bricks were merged into the rest of the facade back in the day.

I've noticed that most modern arched windows have the glass mounted flush to the surface, which detracts from the sense of strength conveyed by the arch. Of course, this is because in many cases the wall is thin and the arch is decorative rather than structural. Can recessing the window and faking the structural significance of the arch help if done sensitively, or is faking it always a pathetic nod to the past?

BTW, the arched windows in the Ryan building appear to be recessed.

Yeah, depth is really the key to creating a believable arch. You can create it even using thin veneer brick, it's just more expensive and has to be thought out because of the corner pieces. Masonry is always supposed to look like a structural element, therefore, fuller and more strong than something like glass which should be set in. From what I can see on this rendering, there are multiple set backs in the arch. As long as it looks deep enough to have been laid in a form it will look good. I'm only worried about this project if they start value budgeting.

Are we shooting ourselves in the foot (speaking in general here) but wanting a formerly structural element to become a decorative element? Like, what's the virtue of brick? Is it inherently desirable, or does it remind us of other buildings we like so it's almost this cargo cult thing where brick = good building when it just happened that brick was on a building we liked that one time.

Yeah I don't know, just thinking out loud here, don't wanna derail this. And for what it's worth I probably generally like brick I guess, and this rendering looks good to me.
Peter Bajurny
peter@bajurny.us
@FISHMANPET

I think it's an important question... It's about the material and the feel... should you use brick? yes of course it gives people a certain emotion and connection with the building when they see it. However you loose that when it's done in a way that it invalidates itself. It's seen as a strong and long lasting material, warm and comforting. If you're going to put that up in a super thin false looking application it's going to look 'wrong' and loose the meaning we've come to appreciate. Just like using any other material improperly. If you use the wrong material and structure on a suit, it'll look bad, that doesn't mean people should stop wearing suits.

I think the reason we've seen it used poorly in the past is because developers and people are misinformed about the value of real brick/architectural when the fake and thin brick salesman comes in and spews off a lot of "benefits" of thing brick. Then all they see is the dollar signs and they don't make decisions based on what's a better long term investment, especially in terms of durability and timelessness.

And more to your point... Arches and things were structural, but all of the decorative elements in the buildings say in Minneapolis were just aesthetic as well, it's not like they were doing it for any structural reason, at least not since greco/roman times really.

Brick is still a VERY good material to coat our buildings in. even if they're no longer being constructed out of it.

The office building is on the Planning Commission Committee of the Whole agenda for December 10.