I don't really want to get involved in this, but...

Unless I'm missing something, the statute defines the stadium site as:


Subd. 12.Stadium site. "Stadium site" means all or portions of the current site of the existing football stadium and adjacent areas, bounded generally by Park and Eleventh Avenues and Third and Sixth Streets in the city of Minneapolis, the definitive boundaries of which shall be determined by the authority and agreed to by the NFL team.

And the Wells Fargo towers are outside of this, no?

MattW wrote:I'm against public financing sports venues. I'm just trying to make the point that both the Twins and Vikings hosed taxpayers. The Twins just hosed us less.

Regarding attendance. US Banks stadium will be used for many more things than Vikings football. I did pull the 10k figure out of my ass but I say it'd be pretty fair to assume that across all events, 20 or less will pull more than 10k people.

Yes, you are against public finance of sports venues. I get that. Do you get that you lost on that issue, that its a historical event, its time to move on, and that its better to judge events on their own merits? Also, do you get that to the extent you have that issue, its with your elected leaders and not the franchises? The sports teams, including the Vikings, only do what pro sports teams do. Its for politicians to decide if they want to have that dance. In Minnesota's case, the politicians chose to dance. Put that in the loss column and move on. (We all have wins and losses in life)

The legal term for judging an activity based on determinations you bring into a forum is "prejudice". You made your point, you lost. Regardless, it has nothing to do with whether the Vikings intellectual property rights are being infringed wrt Wells Fargo. You color a separate current activity with an asked and answered event and then draw your conclusions from that coloring - going so far as to read out of the equation relevant facts that suggest a serious lack of fairness in your position. I have no problem with being opposed to tax-payer financed sports facilities. I do have a problem with folks who hold those ideas and then not accepting (often in full denial) that the opportunity cost of that position is the loss of top tier professional sports franchises. I think the Vikings dodged a bullet and had the owners been other than the Wilfs, this team might be in LA.

You made your point. You keep making your point. When its relevant, keep doing it. Oakland isn't going to finance a new stadium, the Raiders may leave. The Rams did leave. And the Chargers are discussing in earnest a new stadium. NFL teams have that leverage. But when all you have is a hammer, it doesn't mean everything about the U.S. Bank Stadium, the Vikings, and the Wilfs is a nail.

Neither the Vikings nor the Twins (nor the Wild nor the T-Wolves) hosed any taxpayer. At the Minnesota state, county and city level, politicians knew that to keep a sports team in a mid-sized market, they had to pay up. At the end of the day, they chose to pay up. As they are lawfully elected, the Vikings (and Twins, and Wild, and T-Wolves) got what they needed through lawful negations with elected representative of the people who had the authority to act. I get that you don't agree with it. I don't have a problem with that. But whether its the owners of the Vikings, Twins, T-Wolves (all in MPLS), there are no credible allegations of wrongdoing, bribery or anything like that. In each case, the teams bargained above board and in good faith for what they got with government executives (from Mayor to Governor) and legislators (from City Council to State Legislature) who had the legal authority to act - and who acted to lawfully subsidize sports facilities as the cost of retaining those franchises. As Humphrey once said, without the Vikings and the Twins, the Twin Cities would just be another Omaha, NE. From a national market presence perspective, that's obviously true.

The difference is that of all the owners, only the Wilfs get separated out for such intense sustained vitriolic hatred.

As already noted, there were more than a few politicians who knew they would get accolades for standing up to stop a new stadium from the same voter who they knew would also be run out of town the day after the Vikings left and the realization began to burn in - don't kid yourself. (The Metrodome wasn't just among the lowest revenue generating facilities in the NFL, it was in its own category of unprofitable.) Besides, the U.S. Bank Stadium has already caused an unparalleled construction boom in the area around it - that to that point was a tax-dollar-sucking blight - that already promises a net new tax stream that will easily offset initial investments over time.

Also, it will be the U.S. Bank Stadium that brings in large national and nationally televised audiences that put Minneapolis on the national and international sports and tourism map.

All I will add to this is that my post you quoted, VikingFanInMaryland, was a joke. I understand their agreement, as do most people on here, and was poking fun at how they went overboard on the amount of signs. That is all.

matthew5080 wrote:All I will add to this is that my post you quoted, VikingFanInMaryland, was a joke. I understand their agreement, as do most people on here, and was poking fun at how they went overboard on the amount of signs. That is all.

Apologies if I seemed like i was going after you. I just thought I'd use your pic to explain the legal nub of the issue. As noted, while its reasonably clear that the Vikings retained rights, its not clear that when they allowed the one form of large roof signs that the ones Wells Fargo upscaled with are so different as to constitute a material breach. When coming to its conclusion, the court won't compare a building with signs vs a building with no sign but rather will have to compare large sign of one kind with large sign of another and then conclude the difference was so great that it constitutes a serious breach.

Incidentally, the Vikings interest in the DTE Project is as a third party beneficiary. From a relevant document -

Seems like as good a time as any to point out that the Huns thing was definitely funny--a hoot, even.
Nick Magrino
@nickmagrino
nick.magrino@gmail.com

While I appreciate any attempt to poke the bear, I didn't find Huns funny. Not offensive, just not funny.

VikingFaninMaryland wrote: Also, it will be the U.S. Bank Stadium that brings in large national and nationally televised audiences that put Minneapolis on the national and international sports and tourism map.

Yeah, the Vikings sure have brought a lot of very positive coverage to Minneapolis over the last 50 years.

On a side note, are the Vikings back to building the stadium now or are they still deconstructing it to fix leaks?
Instagram

I thought they were going to take off all the siding and fix the leaks and put the siding up but I guess they're going around the building, taking some down, fixing it, putting it back, moving onto the next section, etc. So that work is still ongoing. Lot's of landscaping happening outside right now too.
Peter Bajurny
peter@bajurny.us
@FISHMANPET

I saw that... and spent half the afternoon looking for that third elevator bank!

Another fun trip up stairs in 90 degrees: 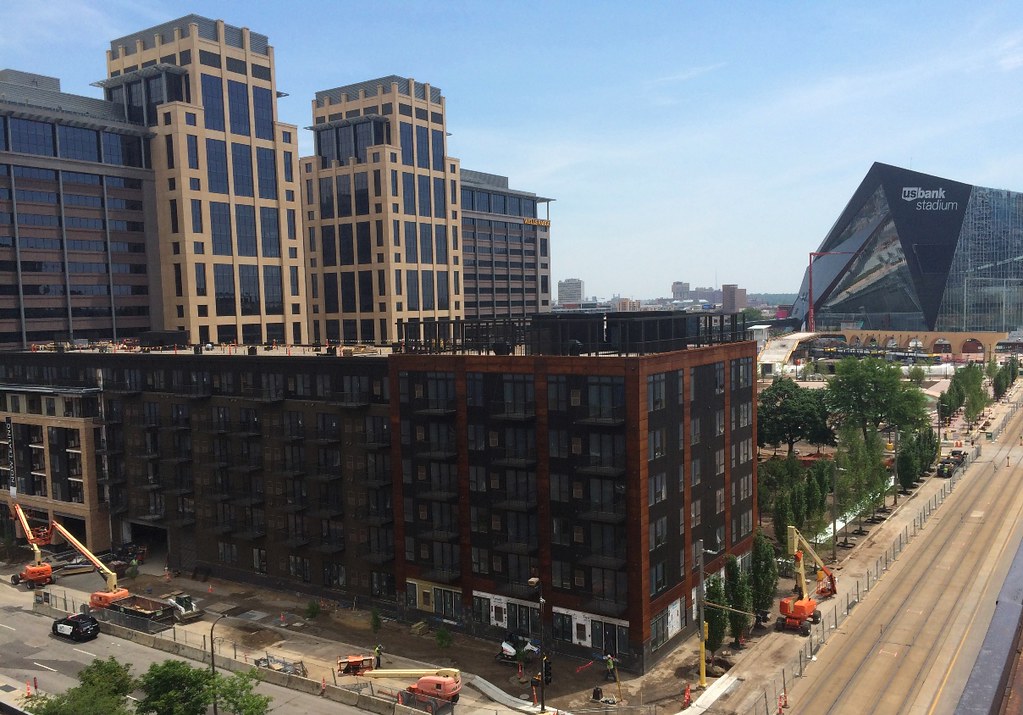 Well thank you for suffering through it, as it's a wonderful shot

The Edition looks better than I originally thought it would.

matthew5080 wrote: The Edition looks better than I originally thought it would.

Completely agree. Every time I go by I'm impressed with the quality of the exteriors. Considering all three will be highly visible from the park, they did a nice job not cheaping out.
The problem with being an introvert online is that no one knows you're just hanging out and listening. 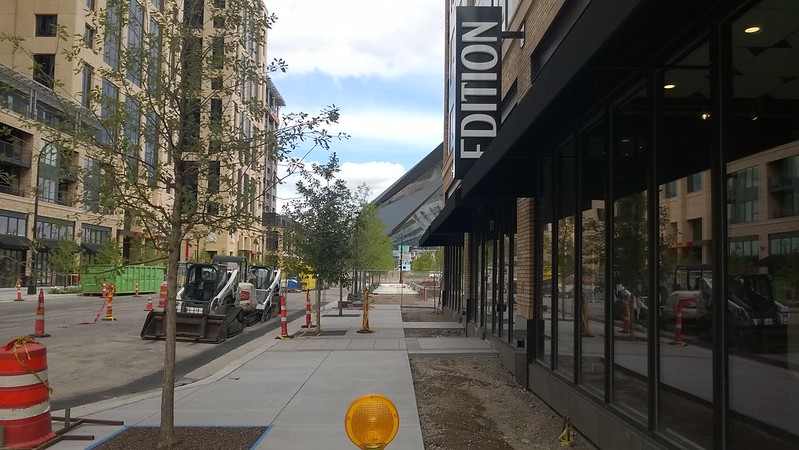 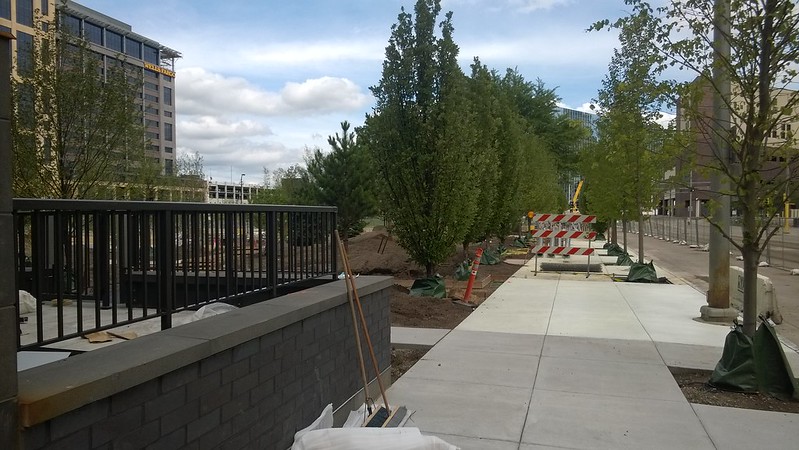 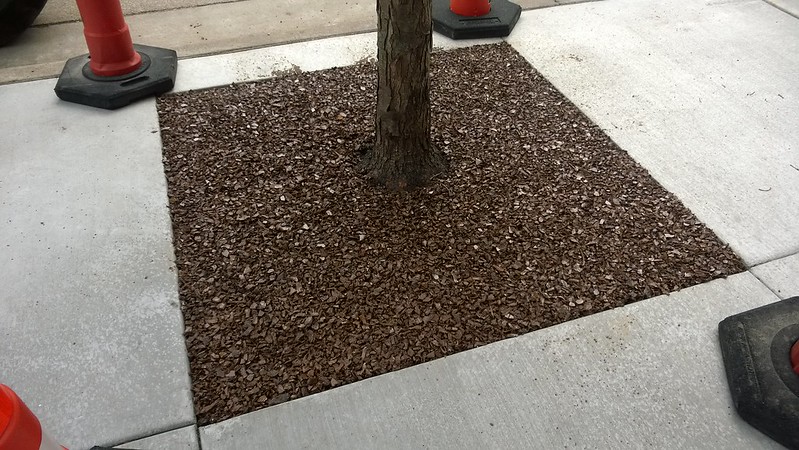 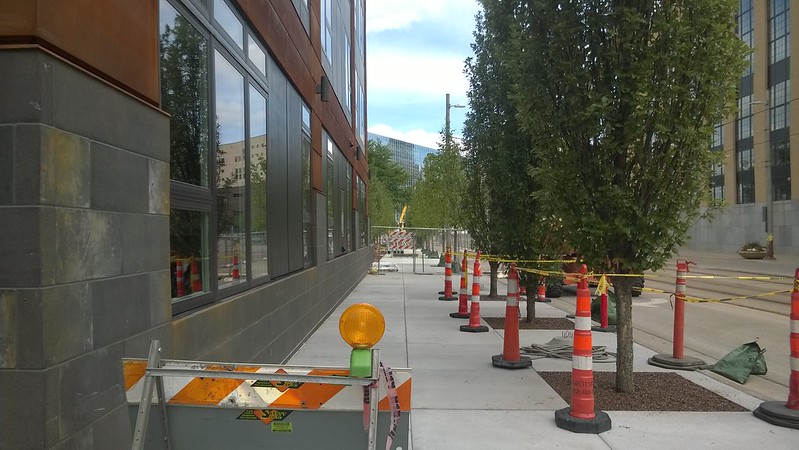 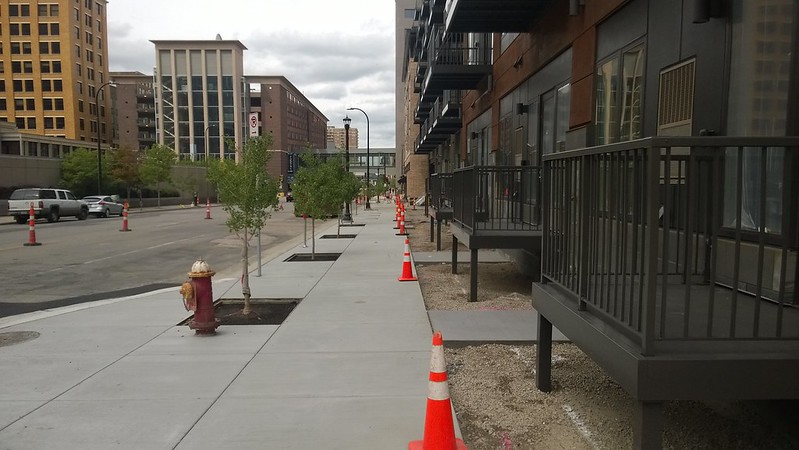 They could have AT LEAST sprung for the $3.75 worth of red paint and slapped a fresh coat of paint on the hydrant so it didn't stand out as outdated and underwhelming. Everything else looks nice.

Why is there still a travel lane on the north side of 5th St on this block?

mattaudio wrote:Why is there still a travel lane on the north side of 5th St on this block?