As far as residences and the new park...

The 'final' proposal still has those same residences, attached to the main buildings, facing the park. It adds another residential building facing the new park. However, It calls for the residences facing 3rd street to be built at a later time.

So... there will be more people living on the park than were planned initially. 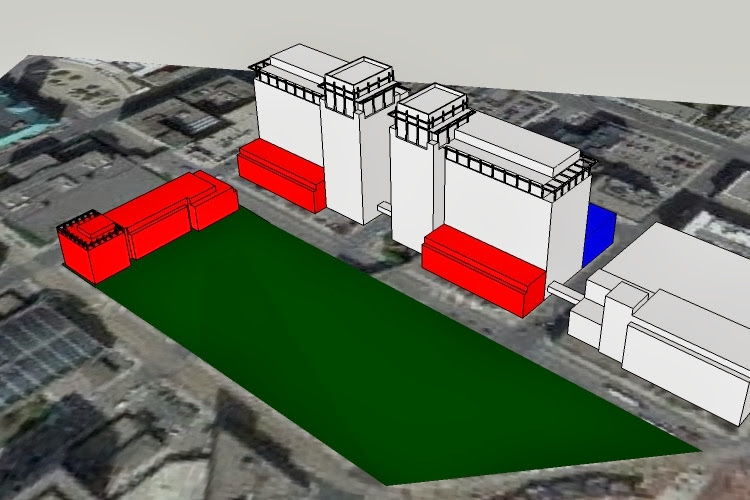 The residences that have been pushed back to a later time are in blue. In red are the residences that will be built in phase I. The residences attached to the office buildings are about 200 feet long each. The separate residential building is more than 300 feet. That's 700+ feet, of the new park, lined by residences.
m b p's Minneapolis Sketchup Models

^^^
Thanks for that to help quell some of the confusion.

There should also be a separate color for the liner parcel on the big ramp -- that's also being let separately, and while the odds are actually pretty good that all phases will ultimately get completed at the same time, that's not guaranteed.

Nope. Drives me nuts too. I've got no problem with the buildings sharing blocks with the towers being smaller, but it's just plain stupid that the park building is going to be another damn six-story stick-frame. I'm not saying it should be a tower, because it shouldn't block the skyline or City Hall, but if the point is to block the jail, it should be tall enough to do so. Otherwise, leave it empty until there is demand for a building tall enough to block the jail.
Joey Senkyr
joey.senkyr@outlook.com

"The largest downtown Minneapolis real estate project in a generation remains plagued by unresolved issues as city officials scramble to get it approved before City Hall leadership changes in just over six weeks.

The $400 million proposal to build a massive mixed-use development, parking ramp and park adjacent to the new Minnesota Vikings stadium is a complicated work in progress. The City Council has not yet reviewed the details of the public financing package, primary office tenant Wells Fargo & Co. is demanding controversial signage and historic preservationists Tuesday tried to save the Star Tribune building, which is in the middle of the project."

What might the over under be on this project?

This will end in two ways. No signs on the roof=no Wells Fargo=no park=nothing will happen. Or what may happen is Wells Fargo gets the roof signs this project moves forward and DT East will get the above mentioned. Both Ryan and Wells Fargo want this park. So if they are unable to build the park as presented with out the Star Tribune building. This whole thing will not happen. At least that is how I read it.

That's what the article seems to say, but I don't know if the Strib is an unbiased source on this subject.

(Jokes. I do know. They aren't.)
Joey Senkyr
joey.senkyr@outlook.com

The roof signs are not controversial. The vikings are the only opposition. Who cares what they think? I'm pretty sure they're not pulling out of the stadium deal over this.
Towns!

The more I think about this, the more I want the building to stick around. I don't feel that way for historical preservation reasons, necessarily, I just think it's an unnecessary step at this point. I don't know why Ryan claims the whole project hinges on the park. I thought they claimed the whole thing hinged on that big f'ing parking ramp. I'm as excited as anyone to see DTE improved, but do these means justify those ends?
The problem with being an introvert online is that no one knows you're just hanging out and listening.

I do hope, though, that the high wall mounted signs remain out. There are a few examples of signs like these, but none of them are good, and I'd hate to encourage every building in downtown to go that route. Most of the existing examples are hotels, and the argument has been made (right or wrong) that it's helpful for visitors unfamiliar with town to have that big sign to help them find their hotel. The same argument really doesn't hold for an office building.

I don't remember where I read it, but somebody else pointed out that the rooftop signs might have the most value as an sneaky advertisement to anyone using Google Maps. Anyone looking at an aerial view of the city will see the signage.

I'm the architect of the "triumphal arch" scheme. Thanks for the discussion of it; I can't say I disagree with the criticisms. At this point it is merely an idea, developed at a crude schematic level and pasted over a found photograph of the existing building. (As you can see, I didn't even take time to edit out the existing building entry, which someone in an earlier post suggested might be for an ATM vestibule.)

I've posted below a modest update that incorporates a structural truss to support the architrave. It is still well short of a proper scheme and leaves the criticisms unanswered. I agree it would be awful if the arch ended up looking like a hollowed out relic of a dead industry. I was aware of this possibility when I created it, but I figured it would be better to get a rough version of the idea out there. Once you begin considering the various activities it could support, it becomes possible to flesh it out in the imagination as an architecturally richer building that exists for its own reasons.

I think that programming the structure with activities that get people to move up through it, not simply through/beneath it, would help make the currently blank walls less blank. Food vendors, performers, a tourist information booth, and other types of street/park life could animate the ground plane. A screen could be lowered from the top of the proscenium opening to show movies on summer evenings. A demountable stage could accommodate musical performances, stage plays, political events, and graduations. And when the Twins or Vikings win their next championship, it could host the rally. (As a once long-suffering Red Sox/Patriots fan, I know anything is possible.) At the very least, the structure could house public restrooms, although that might add insult to an already injured newspaper.

That said, I don't know if a park on this site will work. One can "plant" activities in a park as a strategy for animating it, but as a primary strategy it doesn't get you very far. A park succeeds first and foremost when it has incidental users--people who crisscross it in the normal course of the day. But how many people will have reason to incidentally crisscross this space? This part of the city is underpopulated, and the area east of the park is a no man's land. I'm not sure that several thousand new residents on one edge of it will make for a significant enough critical mass--precisely because they're on one edge.

However, if the park is going to happen, I think the triumphal arch scheme needs to be seriously considered. I'll continue to develop it as I have time, and I welcome more thoughts on it. Thanks again to all. 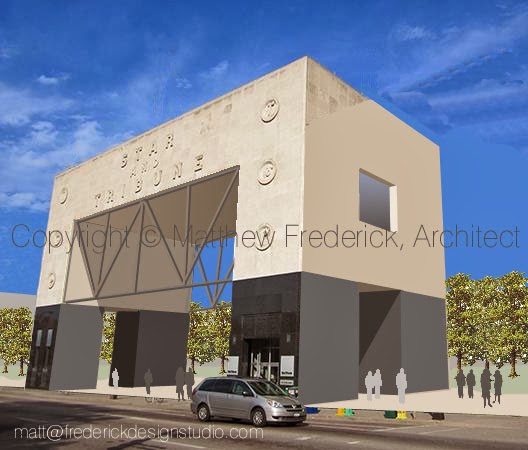 What about converting the StarTribune building to housing, or ripping down and rebuilding everything behind the facade, and having a 1 block park? With keeping the streets open and the proposed housing building and the train station, there's really 1 block and two pieces, rather than a 3 block park.

Matthew Frederick wrote:...A screen could be lowered from the top of the proscenium opening to show movies on summer evenings. A demountable stage could accommodate musical performances, stage plays, political events, and graduations….

Thanks for posting here, Matthew. And for throwing out a very interesting idea. Conversation around the fate of the ST building is a good thing.
The problem with being an introvert online is that no one knows you're just hanging out and listening.

I think this building kinda sucks, honestly. It looks nice from the front but the other three sides of the block are terrible. It's no more "urban" than the jail or HCMC and it's way worse than the hated city center (but in a more out of the way location). I wouldn't tear it down for a park just because, but as part of this larger project I think getting rid of it is just another benefit. Look at the new towers and look at this building and tell me what's better for the city.
Towns!

Thanks for your comments Matthew and welcome to the forum! I do like the idea of a landmark in the proposed park and the triumphal arch is a fun one.

This is just a thought experiment. Let's say we do save the entry facade (leaving alone for a moment the reasons why). Another generation from now people will be wondering why the heck it's so off-center from the dual axes of the park implied by the twin WF buildings and the longer stadium-jail(!!) axis. So why not simply dismantle the facade and reconstruct it on a new structure that makes more sense with the geometry of the space? If this were Indianapolis the question wouldn't even come up about leaving the asymmetry intact. Indy folk love their monumental axes.

The bigger question is, why immortalize the StarTribune with a monumental arch anyway? I like the idea of saving the medallions since they reflect the industries that helped establish the city. Why not re-install them in a new archway that makes them the center of attention and not the name of a newspaper? A new arch (or series of columns or some other "monumental" form) would relate to the history of the city much better. I think Wells Fargo and Ryan would be much more amenable to that idea. Simply "placing" the medallions in the new park as a group of ground-level icons is not thinking grandly enough.
“Wise men speak because they have something to say; fools because they have to say something.” ― Plato

The ideal scenario would have been:
- Strib moves to upper floors of Block E
- Block E gets entirely new facade with windows
- Strib facade is reused for their lobby on Block E.

I think it's unfair to judge the Strib as you would another office building since a lot of the structue was used for industrial purposes (printing). That said, I think it could be reduced in size; maybe down to the original front section facing Portland. I like the way it relates to the slightly earlier Amory. It's too bad the Ryan designs didn't take some cues from these two buildings instead of the proposed generically trendy design. The Strib and Armory buildings are the only structures that give the area anything resembling a stylistic theme.

This and the Armory are two of the few real substantial Art Deco buildings that were built in the city. The Rand and Foshey would be the office towers of that period.
Post Reply
2904 posts