sanguinic wrote:I wonder if the medallions from the Star Tribune building are going to find a home in those circles. And agreed: this limestone or stone-like material is a vast improvement on the City Center-like precast concrete on the building's opposite side.

When I saw those circles I too thought of the medallions ...not so much as putting them there but gave an historic nod to them. I do like the idea of incorporating them though.

Cool and it's wonderful you keep up with this to such a degree.

My guess is that the two "circles" shown in the images above are not placeholders for the six Strib medallions but rather are additional medallion-like decorative elements for the facade. According to the Strib story linked above:

"On Tuesday, Ryan announced that the medallions will be placed on the facades of the two 18-story office towers, called Wells Fargo Entry Plaza, at approximately the same height as their previous location on the Star Tribune building. Four of the seals will face the park; the others will face each other beneath a skyway."

Glad to see that at least on the Portland sections of the WF Towers there will be Kasota stone at street level. 5th and Park will have much to be desired for streetscape from what I'm seeing so far.

I like this angle. In a year there will be a park there hopefully. 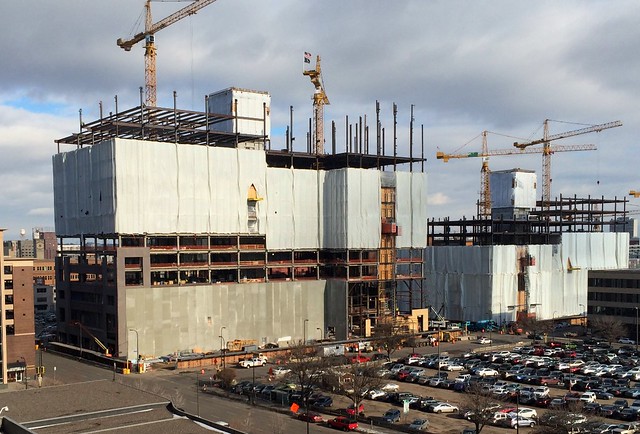 Is the area with the ugly cement wall where the residential portion is going? If so, is that slated to be completed with this project? If not, how long do we live with that wall before it is done? YUCK!

Yes. The residential will cover the unfinished wall.

Is that a little doorway in the middle of the concrete expanse connecting the residential to the Skyway?

Those residential buildings in front of the towers facing the park will be quite shallow. If that's a door to the skyway, I'm guessing there will be one vertical transportation core and one long corridor along the concrete wall to access all units. Another less likely option could be multiple vertical transportation cores allowing all of the units to occupy the full depth from the concrete wall to 4th Street.

lorwest wrote:If that's a door to the skyway, I'm guessing there will be one vertical transportation core and one long corridor along the concrete wall to access all units.

Yeah, I'm pretty sure that this will be the case. It's a pretty common set-up for a liner building, and it makes sense because residential units need windows.

Are they still going ahead with the residential building directly across from the jail? It's weird, in recent posts/images regarding the park - the building isn't mentioned/shown.

The more I think about it - I am for that building. Having the park dead end with the jail across the street would create a dead zone.

And it added an extra awkwardness to naming the park "The Yard",

Or Hennepin county can start clumping some more of their buildings together. I've noticed a lot of government owned buildings downtown. Some of course should stick around, but others, like the public safety facility could easily be added on to for more room

The Public Safety Facility won't be moved for years, if ever, because it holds defendants who have court in Government Center. (There is also a jail and police in City Hall.)

Of the court buildings downtown, I can only imagine the Family Justice Center being moved someday, especially if the Ritz Block gets developed. (The Juvenile Justice Center is also fairly new.)

We'll see how this darker stone looks when it's done. Kinda 80s. Also, a reminder that the backsides of these are blank walls, so hopefully someone gets on developing the back thirds soon. 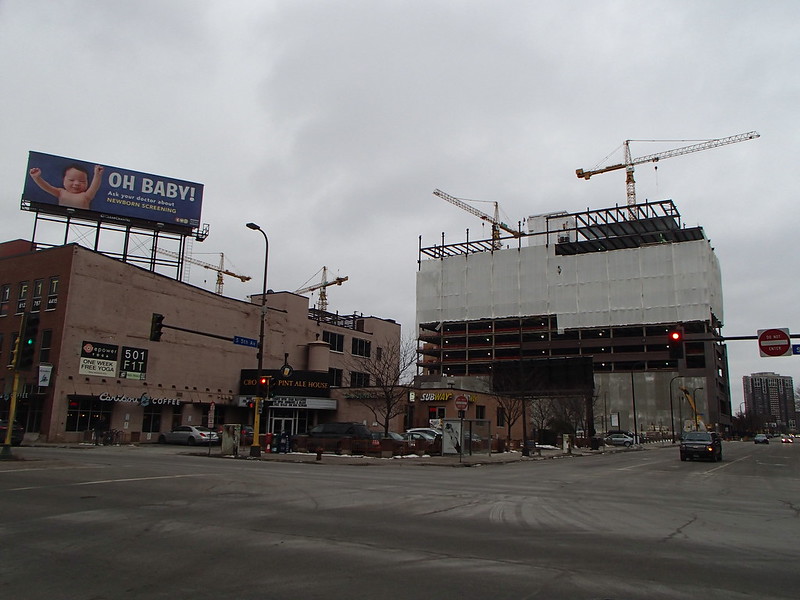 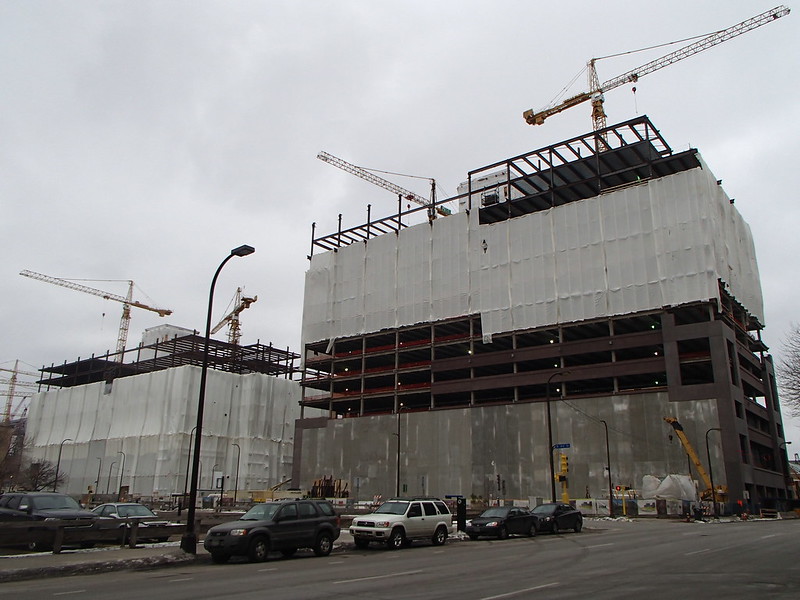 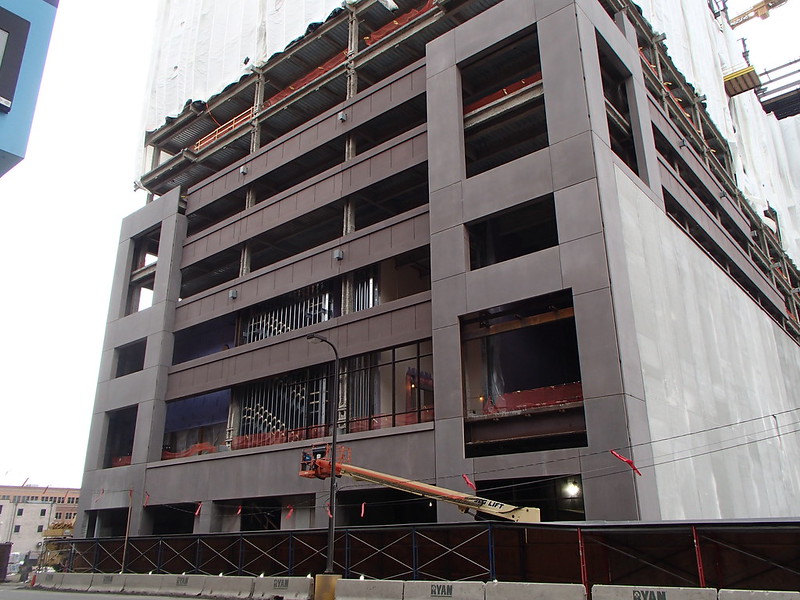 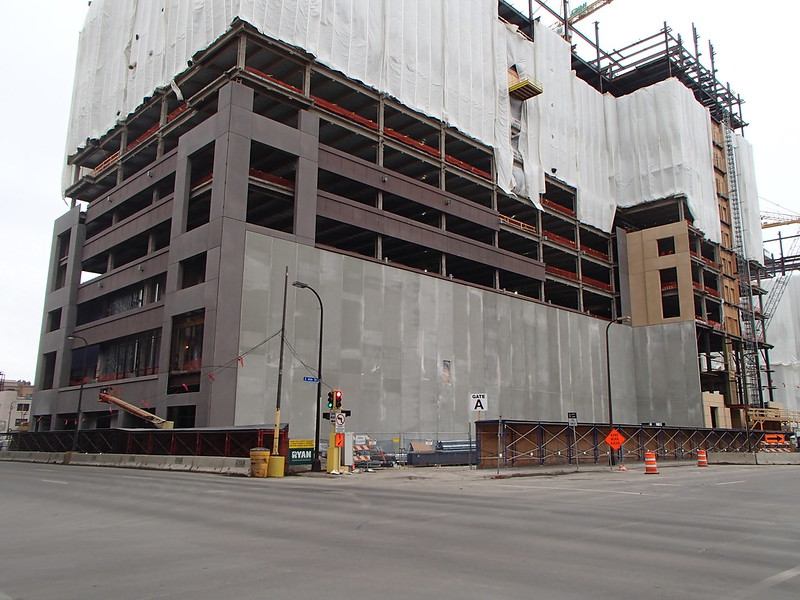 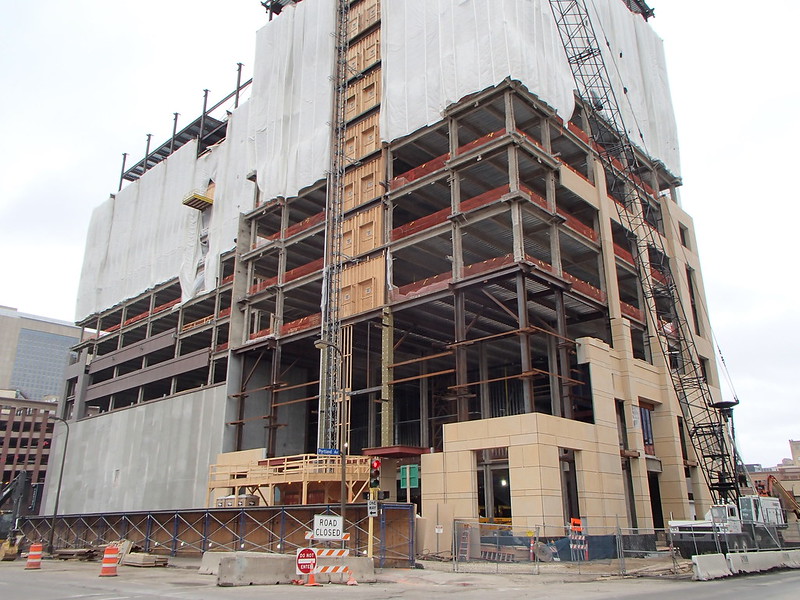 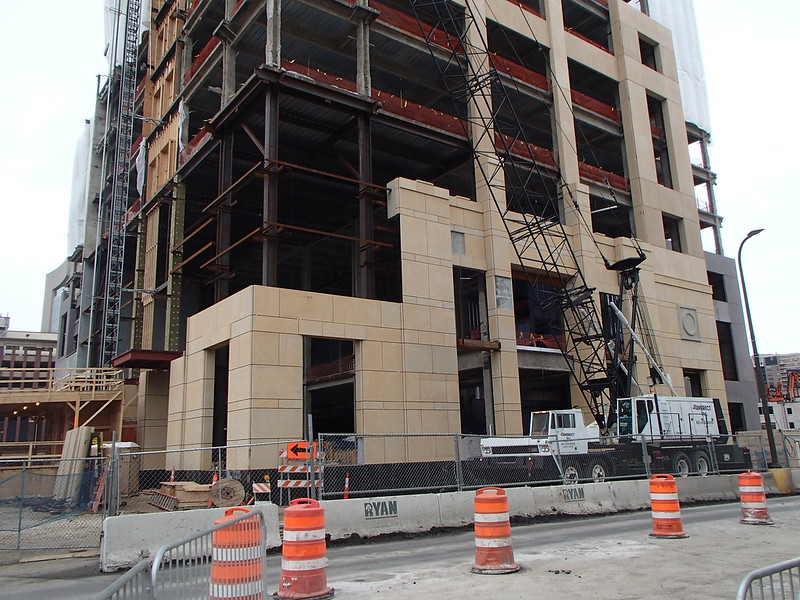 Thanks for all of the pics Nick, Even though I get around the city more these days. Those sure helped me see how projects that are not on my normal walk around the core are doing. Thanks again.

So far so good with this project IMO. The contrasting colors are nice, hopefully the two taller portions will have an ornate look when it's completed.
Born in Minneapolis.

The Minnesota limestone on the 4th Street side is fine. Handsome, even. The precast concrete that will cover the vast majority of those two towers is pretty dreadful. The city deserves better.

sanguinic wrote:The Minnesota limestone on the 4th Street side is fine. Handsome, even. The precast concrete that will cover the vast majority of those two towers is pretty dreadful. The city deserves better.

I think ( and hope) it may look better when its further along. But this issue of developers always using cheap materials for so many of our newer projects in this city will have a cumulative negative effect on our city's character. It's kind of sad.

I think once it is cleaned, joints are put in and windows mounted it will look considerable better, And I hate precast... but I think it's hard to hate on something this early.
Post Reply
2904 posts