min-chi-cbus wrote:It's for that very reason that I'm against the Gateway Park taking up so much Nicollet Mall frontage. A report came out just yesterday saying that average office rents on Nicollet are over $30.00/SF, up over 50% in just two years. Why pave the remaining lots on Nicollet over with park space with prices that high? I'm not saying I don't want or like parks, but I don't know that I agree with the plan for a park HERE.

You raise a valid point. I do think there should be a major diagonal green space to extend Nicoller Mall to Hennepin, but a majority of the park land could be made into a commercial development. It's a waste of prime real estate and tax revenue for the city. Also, I'm skeptical about our city's ability to maintain it. And then there's the criminal element the new park will in inevitably attract. The city doesn't appear to be able to control the security at 7th and Nicollet or the loitering of drug dealers in front of the Library. How will they keep the Gateway Park safe?

Back to Marq4, I'm wondering if anybody has the ability confirm the new height or addition of 4 stories?

Here we are, on October 1st & 15 pages deep into the 4Marq thread, and no one has heard anything substantiating that this project is going to be off the ground anytime soon. It would be nice if there were knowledge to support this building at least getting off the ground before 14'.

kregger22 wrote:Here we are, on October 1st & 15 pages deep into the 4Marq thread, and no one has heard anything substantiating that this project is going to be off the ground anytime soon. It would be nice if there were knowledge to support this building at least getting off the ground before 14'.

Go ahead and re-read the first half of the LPM thread where everyone was bemoaning the same things. Be patient.
This will happen. They only announced it this summer, they need time to get all of the RFP's then secure financing, start ordering product, etc. These things take some time. Mortenson is big, but has a lot of irons in the fire right now, it may even come down to when they have a team available to run the project.

I agree that it would have been great if we combined all of the buildings into one tall, narrow building surrounded by a parking lot.

Here's a 'more detailed' version of 4 marq for google earth... if anyone would like:
http://sketchup.google.com/3dwarehouse/ ... 45&ct=mdsa
The model takes a few minutes to load. For quick future access, right click (in the tab on the left) and 'save to my places' in google earth. 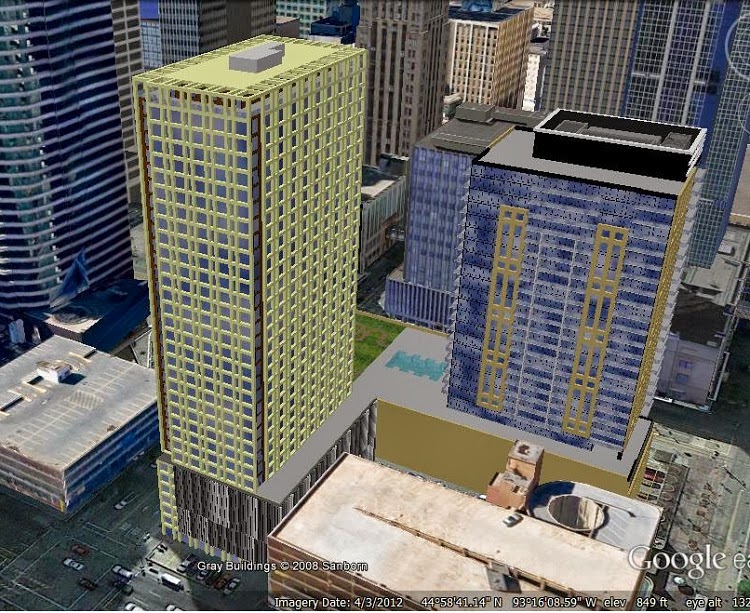 Forgive me if I missed it on the earlier pages of this thread, but looking at that model, are the two buildings' pedestals officially going to integrate that smoothly? Or is this merely an educated guess?

I believe 4 Marq has a taller pedestal, so it looks to be one on this model is the nearer 4 marq is taller than Nic. But I could be completely wrong.

That is so cool, thanks!

I see another potential redevelopment opportunity on the corner of the block directly across Marquett from 4Marq, which appears to be a 3-4 story parking ramp.

The development on this block demonstrates why I dislike developers with super blocks ala the star tribune blocks. These three buildings are all going to be so different but have a really great urban context. Meanwhile I think the strib blocks plan will seem monotonous. I'm excited for it all, I just like to see parcels interpreted within their context and creative uses for space.

^The funny thing is that someone went through all the effort to do that.

It was me. MS3, not someone. I deliver construction equipment to job sites and when I'm there I ask a lot of questions to supers and workers. That's where "I heard" about the change from 30 to 34 stories. at a construction job site. Then I posted what I heard only AFTER another person posted hearing about the additional 4 stories added also. As far as Wikipedia goes, I have no clue who set up that or how wikipedia works. So the "someone" is more than one. There's a lot of "I heard" postings on here. If that's offense then your problems are personal. this isn't the Marine core, (trust me) its a forum. If someone posts something they heard and it speculates into a rumor, so what? Until we know for sure, all we have to go buy is- I heard, opinions, and rumors.
It's Been nice communicating with you all... MS3

Unless you have proof it was the same person this is a pretty lame ass post.
Towns!

Being the geek I am, I emailed Mortenson to inquire about the correct height and number of floors. I'll get back if they reply.

is that why this was locked for days? because someone heard a rumor and posted it? that's pretty lame (that it would be locked for that). Because of your scolding, If anyone hears anything about anything in the future... do you think they are more or less apt to post it here?

Thanks for deleting everyone's posts too.
m b p's Minneapolis Sketchup Models

You knooooow, I'm just going to say that I, personally, have spent quite a bit of time putting together a website for people to use. Including, but not limited to, spending whole days walking/biking around the city(ies) taking photos, working on the not un-complicated back end of the forum, organizing posts and threads, looking through news/government websites, and so on. And it's fun! I like biking and I like looking at cranes, and I realize that the site is mostly the result of other peoples' efforts. But the outrage - outrage! - that gets displayed by a handful of people whenever I feel like maybe, just maybe, there should be a bare minimum level of quality in conversation is just ridiculous. I realize that sometimes some of my moderation is a little shitty Millennial/snarky, and probably doesn't always translate in writing. But frankly, I've met probably the majority of regular posters and almost all of the contributing regular posters, as well as many lurkers who've mentioned the site to me in passing in real life, and so far no one is really complaining that much. I would say the "why are people talking in circles about whether or not a building is on the 17th or 18th floor for three pages??" comments probably outweigh "you're a fascist" comments, in that I've heard the former more than once and the latter zero times.

Just...realize that the reason the forum is here is not for any one person to broadcast their stream of consciousness into the world. There are many, many other online outlets for that.
Nick Magrino
@nickmagrino
nick.magrino@gmail.com

This one should finally get going in December. An excerpt from the Star Tribune is below.

^^^ I get what your saying Mini-chi-bus, but at 30 stories, Marq4 is still more slender and taller than Nic on Fifth and will actually help downplay it's neighbor's stumpy design. I think you really have to envision this block in it entirety with all the projects completed. No, none of the buildings have much impact the skyline, but it does create good infill with a strong urban wall effect at the street level. And I think it's important to remember this block was a complete dead zone for decades and contributed nothing to our city . Now be patient. There will likely be more ambitious projects sprouting up nearby which we will learn more about next year.

minnyapple wrote:This one should finally get going in December. An excerpt from the Star Tribune is below.

To build on this, I was with a friend Saturday who works for Mortenson and even in my state of "drunken stupor", thanks cc club, I remember him saying December as well for this, so almost ready!
Post Reply
836 posts