min-chi-cbus wrote:If this were 20-something floors it would have a similar (key word, but not identical) effect as RiverWest, IMO (of course). As in, it would be a block-long wall that blocks views -- the primary difference being this is a block or so further from the river, there's ground-level retail, and it's shorter.

Is that more accurate? I just am not a big fan of gigantic monolithic buildings that take up large chunks of land. I'd rather see a dozen smaller projects than one large one 99% of the time. That's the gist of what I was trying to convey. That, and the fact that this building does block-long monolithic walls quite well (per the comment about elegant buildings like the Parliament).

Sometimes it's easy to have a knee-jerk reaction to the negative piece of a comment but overall I'm very positive about this project!

I don't know that I'm the one responding negatively. I was simply agreeing with another commenter that I didn't think this was like RiverWest.

It's also no 222 Hennepin...Latitude 45 is a half block project and the design seems much more coherent, thankfully.

Did anyone else see on page 4 the dotted line for a "New Hotel"?

On that same page it almost looks like at least one street crossing the Yard park has a tunnel as well?

bubzki2 wrote:On that same page it almost looks like at least one street crossing the Yard park has a tunnel as well?

Yes, but the document is over a year old. I think the Yard street concepts were still in limbo at that point, and it's not really material to this project, so they probably just used whatever was current at the time.

There apparently was (is?) an existing tunnel connecting the two Strib buildings.

EDIT: Sorry, just looked at the PDF -- this clearly isn't what was being referred to.

EDIT: Sorry, just looked at the PDF -- this clearly isn't what was being referred to.

Off topic at this point, but yes, there was one. 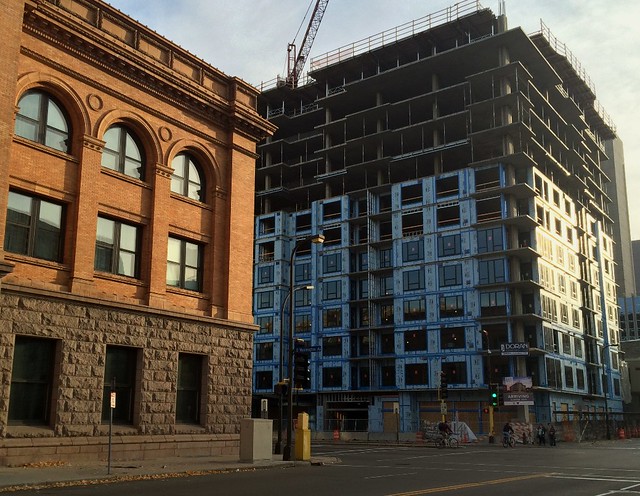 Sweet! I wonder what it'll be like, hopefully something with a good reasonable lunch option for the office workers around too!

I guess I should know this -- is the big restaurant space in the Depot Office Building still vacant?

Marginally related, BUT, I remembered that there is a restaurant/music club in my hometown (Sioux Falls) called Lattitude 44; now I've been googling "Lattitude ##" for a few minutes, and it looks like restaurants/apartments/entertainment venues exist with this name at least down from Lattitude 48 (Whitefish, MT) down as far as Lattitude 25 (Florida Keys). THE MORE YOU KNOW

Changes in latitude, changes in attitude. That certainly bodes well for the expansion of ground-level commercial space along Washington, as future buildings are planned nearby.

It's nice to know that they managed to pre-lease the the retail space nearly 9 months before the building will be completed. I'm sure the spa is banking on pulling in weekend customers from the Depot across the street. There are plenty of weddings there throughout the year and the hotel doesn't have a spa of its own. 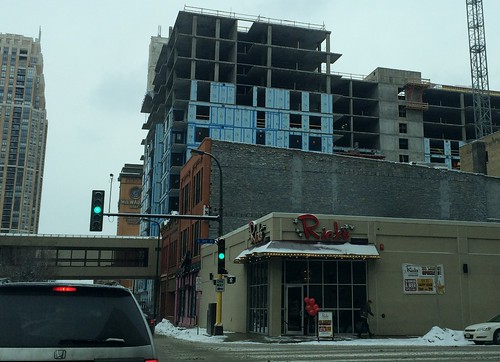 Any exterior facade components going up yet?

When I drove by last night it looked like the ground floor (at least the side facing Washington) didn't have anything put up, just insulation board or whatever that is right now.
Peter Bajurny
peter@bajurny.us
@FISHMANPET

Not yet, just the windows that they have installed so far.
Post Reply
375 posts