PhilmerPhil wrote:I forget where--I'm pretty sure it came from someone close with the fire department--but I heard that the City may be looking to do something with that fire station development-wise.

That's a pretty small lot. Maybe they have something planned, but unless they're planning to acquire that whole half of the block (unlikely?) I suspect they're just planning to hold on to it.

I think that's fine. That corner parking lot is weird to look at, but most of the businesses front the sidewalk well and it's so small that people drive it slowly. Besides, there are no fewer than five shops/neighborhood amenities in this building (Caribou, 501 Fit, Crooked Pint, Rejuva, and Subway) in an area with few other spaces, vacant or not. I doubt a new development would include more than one or two, and they'd have to be more expensive than these, right?

(For what it's worth, this is also one of only two small commercial buildings left on Washington ave from the old MIlwaukee Road ROW all the way to 1st Ave N. This building certainly isn't historic in any way, but it's worth considering.)

I might also add that Crooked Pint patrons cannot park in that small front lot. It's for the Caribou and Subway only. I tried to park there last Friday when going to Crooked Pint. Had to park in the back pay lot, which wasn't a big deal - but I wanted to point out that the small lot is more a short-term lot for those sidewalk-fronting establishments only.

Their portfolio is full of strip malls and suburban development. I'm no longer optimistic.

Not just strip malls. Dilapidated strip malls. I work nearby the Winnetka one, it's like a time machine to the early 80s.

Their portfolio is full of strip malls and suburban development. I'm no longer optimistic.

More specifically, their portfolio seems to consist of tired and/or distressed strip malls. LS Capital does not appear to be a developer themselves. This is likely a "hold for a while and sell later". If there is immense development pressure, I'm sure they'll get a nice return on it. In the meantime, ugly as it may be, it's a rare bright spot of convenience retail in an area deadened by the Gateway ramp, Depot train shed parking lot, Depot office building, etc. Until the area fills in more and matures, it's fine.

From a redevelopment perspective, I think you'd only have to remove the Subway "wing" and you'd have the 5th Ave frontage to work with for a new building. Crooked Pint would lose that marquee/entrance and Caribou would lose their windows facing the parking lot, but the existing 3-story building is just fine where it is.

PhilmerPhil wrote:I forget where--I'm pretty sure it came from someone close with the fire department--but I heard that the City may be looking to do something with that fire station development-wise.

The City plans to renovate and expand Fire Station #1 in 2018.

On the city's website, under Residents=>Transportation & Parking=>Public Works Construction Projects, there's a 433-page document entitled "2016-2020 Capital Budget Request", sort of a five-year plan without worker quotas and targets for shoe production. It lists all the projects by category, ranks them by priority, describes them, and gives anticipated start dates. It's a good place to start before yelling, "Why isn't Minneapolis doing anything about ...!"

The Fire Station is in there, near the end, as FIR12.

Also in there are plans for addressing the generally abysmal pedestrian environments of downtown's east-west streets, which someone brought up during the bitching about the changes to Nicollet Mall reconstruction. PV072 describes pedestrian improvements scheduled for this summer along 6th, 7th and 9th streets between 1st Ave and Chicago. It's ranked 8th out of 46 paving projects, and that's encouraging. Since the "Downtown Pedestrian Improvement Project" is scheduled to begin this June, you can see details of what's involved under "2016 Projects" on the Public Works Construction Projects page.

Because 8th Street needs complete reconstruction, making that thoroughfare prettier east of Hennepin has been pushed off until 2019.

And the County is supposedly reconstructing Washington Ave South between Hennepin and 5th beginning this year, too. (That's the one with the cycle track and all.)

If all this comes together, walking from the core over to Downtown East could become less dreary over the next few years.

martykoessel wrote:Also in there are plans for addressing the generally abysmal pedestrian environments of downtown's east-west streets, which someone brought up during the bitching about the changes to Nicollet Mall reconstruction.

I got some air time on KSTP bitching about how that project misses huge opportunities to move in the curb. Especially at intersections, where there's no legal parking anyways. Gotta say, for as much as it's the thing to bash St. Paul, they generally do a better job (and have done so, for a long time) of providing bumpouts at intersections.

The Downtown council had it's annual meeting recently and released some numbers:

Downtown population is up 1,051 over last year to 39,960. Sounds good, but it shows the population growth may be tapering off (DT added 1,383 people in 2014) and there are only 680 units projected to open this year. Target's downtown employment dropped 25% in one year to 7500, down 5,000 from 2 years ago. Combined with TCF leaving with 1,000 employees for plymouth i'd expect total DT employment to be significantly down over last year, which I guess is why the council isn't reporting that number.

But there's also a lot of smaller suburb to downtown moves happening. One just happened yesterday in fact.

I'm pretty skeptical that there were enough of those to make up for a loss of at least 3,500 employees in a single year.

A multitude of companies moving downtown making up for some of the employees relocated by two employers could be healthier long term. Especially if the trend continues. Less eggs in one basket so the entire city isn't at risk of being empty if one employer moves to the suburbs.

Here are just SOME that have moved to downtown. 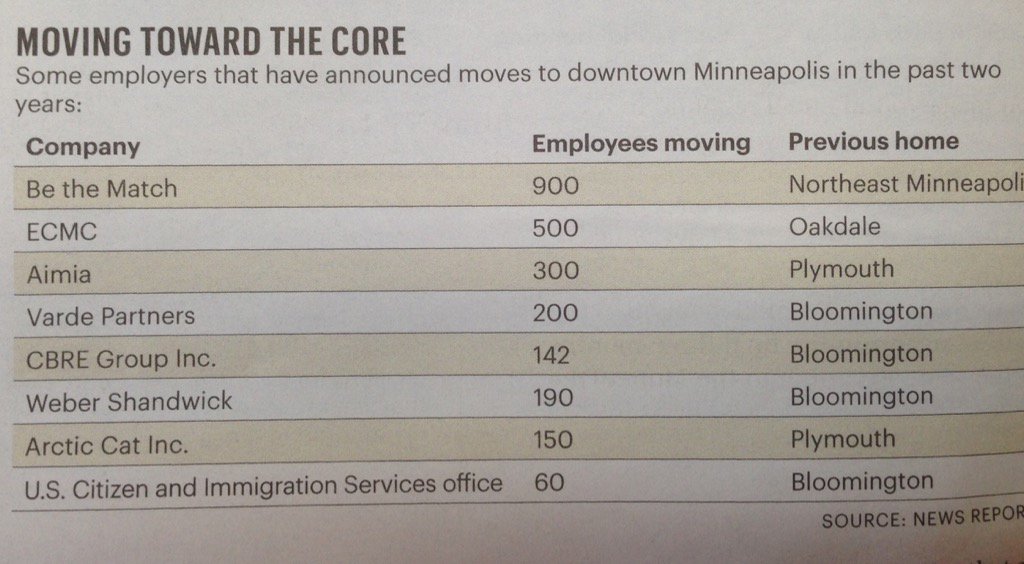 The spin-off has about 45 employees, but Drobny said the office design has enough space for 55 employees.
“We’re going to be growing right out of the gate,” he said.

1,000 does seem kind of low, especially considering the huge area in that definition of downtown.
Nick Magrino
@nickmagrino
nick.magrino@gmail.com

Been ill for about 2 weeks so have had limited or no access to the internet. But this past weekend while in the hospital I got a bit of a "what if" in, how much of the states current surplus is due to the materials and especially the payroll taxes that are being paid to the construction workers. This is like the second surplus and the second year of a building boom. How much have the wages going into DTE and the city core had a multiplier effect on the other areas of the city and suburbs where many of these workers live. What are your thoughts on that.

Which brought me to make another list of projects that will be filling the payroll taxes for 2016. These that I have done are projects that are now working (U/C) and not just proposed.

U/C open 2016 Hotels.
Marriott Renaissance for their additional floor and rooms where the water park was.
Hewing Hotel is well underway.
Embassy Suites will be open this fall if not before.
AC Marriott will bring hotel rooms to Hennepin.
Radisson Red will be the first of the DTE hotels to be finished and open for business.

Commercial projects:
Target Center
The Armory
The HCMC Medical Center
Xcel building is finished off and move in during the 2nd quarter.
The new lobby on 100 Washington.

Finally residential U/C opening 2016
Encore Apartments
The 2 apartment complex on 2nd and Central
The Portland
Nolo Flats
100 Hennepin Ave
The Editions with their finishing work.
700 Central up in NE

There were a lot of proposals that I left off because they were not yet under construction. Will some of the proposed projects really will not get going until 2017 when their greats labor dollars will be spent. I think we will make another 1B dollar year with construction like the last 2 where we easily broke the billion mark.

So I was just looking at the wikipedia page for Gold Medal Park and it says Bill McGuire's lease ends in less than a year (January 2017). What happens then? The city and the Guthrie take it back? Does the parks board administer this now? If not, will they starting in 2017?