The owner/presenter apparently bought the recently closed South Fork Brewing, in Delano, and will be moving the brewing equipment to this building and naming the new brewery Brass Foundry. They're planning on tearing down the garage portion and replacing that with a two story brewhouse with a rooftop deck. He has plans to try for a good connection to the bike path, and just shrugged off a question about parking. Should be pretty cool.
Joey Senkyr
joey.senkyr@outlook.com

Aww, that garage is cool.. The whole building is entirely unique; plus it already has a rooftop patio. It seems like it would be very successful as is—just replace bedrooms, etc. with seating, similar to coffee shops in old houses.

I was looking on the planning commission website and can't find what I'm looking for, anyone on the form think they could find it for me?

I am trying to find the planning commission documents for the East End apartments. It is the apartments above the Trader Joe's. I believe the address is 721 Washington Ave. S.

Never mind, I think I found it. Sorry.

Has anyone seen any numbers or thought to calculate the percentage of downtown which is parking lots now versus say 2010? I'm just really curious in percentage terms how much "open space" has been used up. I presume this will help frame where and what types of development we will see during consequent building booms.

grant1simons2 wrote: ↑
August 17th, 2015, 6:13 pm
Youthlink/PPL is working on a 5 story 46 unit addition to their current location at 12th & Chestnut, just on the outskirts of downtown. The units will be placed in quads to relate to peoples interests similar to how some dorms are set up. Their focus will continue to be changing young peoples lives, ages 18-23, before they become long term homeless. I'll try to get some pictures of site plans and renderings soon.

Remember this? It's topped out. 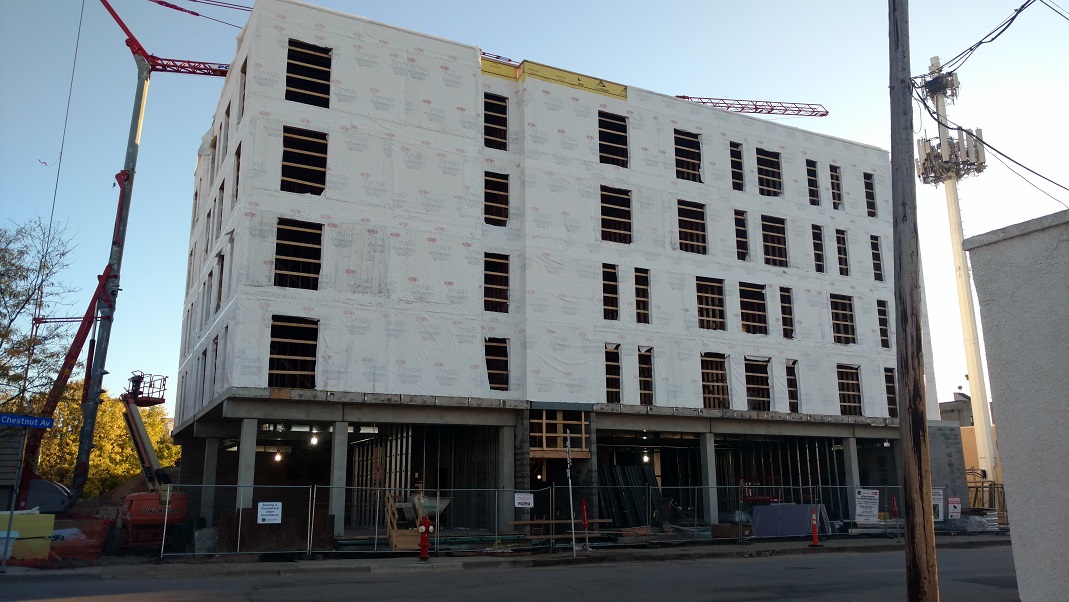 Pretty great use of previously wasted easements for the freeway.
Joey Senkyr
joey.senkyr@outlook.com

3 and 5 story buildings at 7th St and Park Ave for House of Charity.

Intro:
House of Charity is expanding its presence on the east side of downtown Minneapolis with plans to add 61 apartments, build a new food center and provide more access to mental health and addiction treatment services.

The nonprofit organization has submitted an application to the city for a $23 million project that would be done over two phases, starting as early as fall 2018.

All of the work will take place on the block bounded by Park and Portland avenues and Seventh and Eighth streets.

House of Charity bought the one-story former Finance & Commerce printing building. It will tear that building down to build a new food center below two levels of offices for staff and treatment services. That project, if approvals and fundraising go accordingly, would be open in fall of 2019. 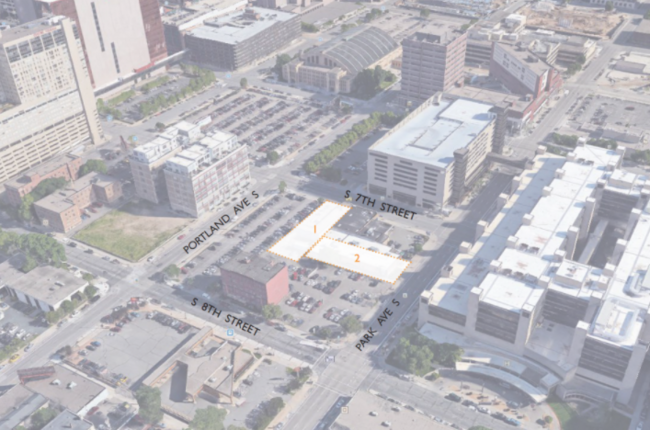 Wonky visual of Phase 1 from 7th Ave - this rendering makes it look like the building will be angled, but it's not 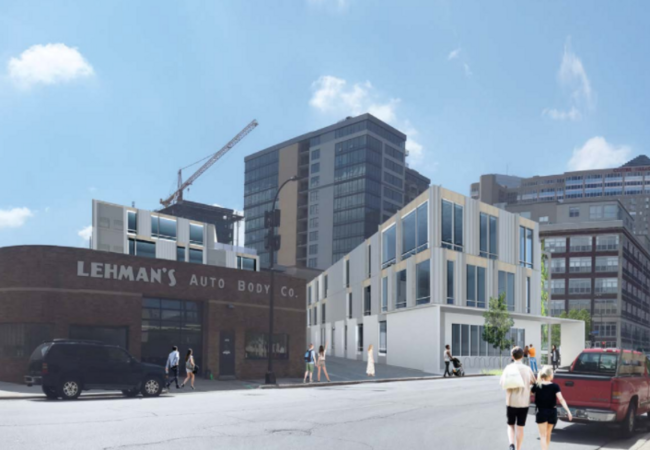 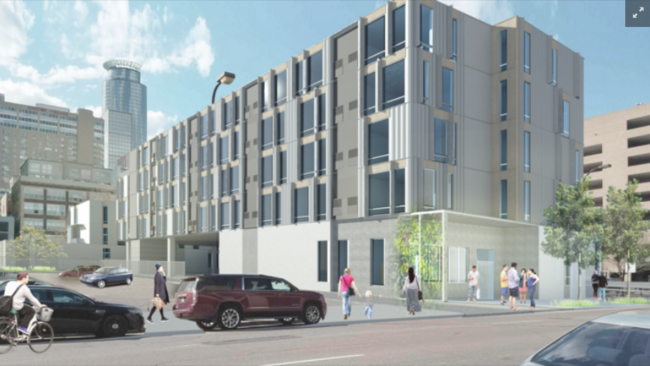 Cliche but I wish they were taking more parking, and they could also be taller, with more uses. This is downtown, buildings should be big, and with housing and jobs nearby, they could have retail

This housing is really needed and I'm glad it's happening. However, the buildings seem oddly place and cut up the block a bit. Too bad they can't just stack them on top of each other.

Here's a link to their website regarding the project.

Sacrelicio wrote: ↑
October 27th, 2017, 9:11 am
Cliche but I wish they were taking more parking, and they could also be taller, with more uses. This is downtown, buildings should be big, and with housing and jobs nearby, they could have retail

I thought the same thing when I read this story. Seems to me there's a much larger need than 61 apartments will provide - but I'm sure costs factor heavily into that. I also wonder what the west facing portion of the office building (phase 1) will look like. That surface lot to the west of it will certainly become something at some point (and likely not too far off). So I'm curious to see how they plan for what will likely be a pretty close building. I get the need for two phases, so they can build, then demolish the kitchen portion. I just wish they would go taller with more units. This is a great place for more density.
Last edited by HiawathaGuy on October 27th, 2017, 10:36 am, edited 1 time in total.

Yes, the fact that housing is being built is great, but a lot more housing would be better. I realize there are almost certainly budget reasons preventing them from going bigger, but I wonder what else could be done to make this better for the charity and the surrounding area.

In the current environment, very little affordable housing is being built, and in fact this has become a major issue in the mayor's race. Also, especially in the case of housing for the homeless, there are some instances of truly depressing structures. Just think of what's on top of the Salvation Army center at North 3rd Street and North 10th Avenue. It's possible to complain that the House of Charity project could be bigger and better, but IMHO I'm impressed with what they've put together under tough financial, site and contractual constraints. Hurrah if this goes ahead! I hope that some other stalled projects, such as the workforce housing across 6th from the stadium and the proposal on North 5th Street, near the bus garage, can find a way forward.

As much as this is needed, I hope the city can influence them for a better design. Phase one looks like it goes were an alley normally would go. That would hamper any development of that parking lot across from Portland Tower.

MattW wrote: ↑
October 27th, 2017, 2:28 pm
As much as this is needed, I hope the city can influence them for a better design. Phase one looks like it goes were an alley normally would go. That would hamper any development of that parking lot across from Portland Tower.

My guess is that that alley would need to remain, and their renderings don't show the west side of the new phase 1 building, as I stated earlier - so it's hard to know. It's possible the new building will fit in the same footprint as the existing building there, meaning the alley would remain. Regardless, when 1103 Properties decides to sell their surface lots (which I believe has been discussed on here?), the building would likely need some sort of setback from this new building. But as we saw with Sexton 2 across the street, it's build very close to Sexton 1. That's why I'm curious to see the west facing side of this proposed House of Charity building.

Anyhow, here's a quick visual of who owns what on that block: 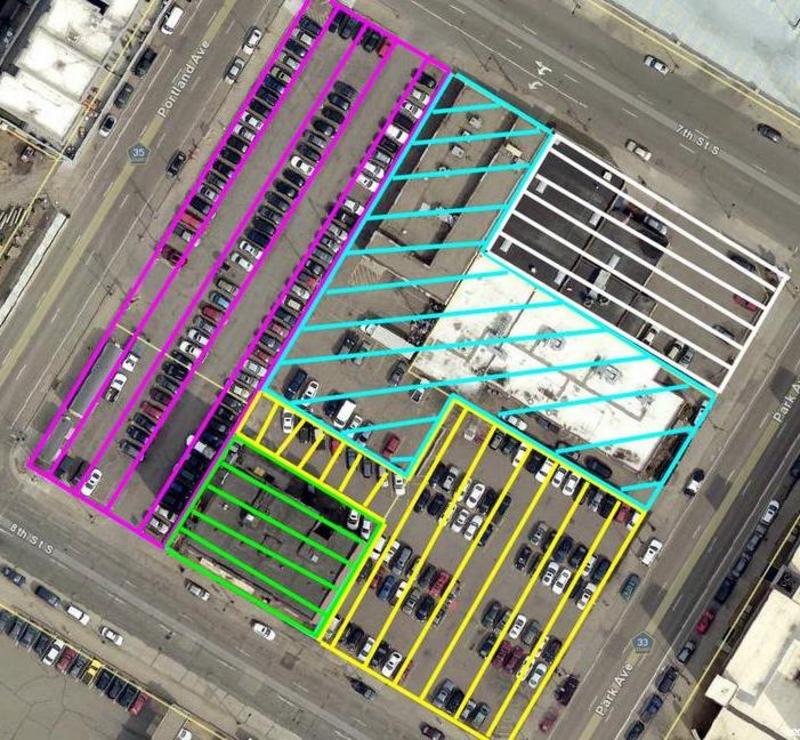 I thought that was strange too. The large lot was purchased in 2006 for $1.3 million. Paisano's Pizza used to be in St. Paul and Woodbury. The address listed for the property owner is 1818 Grand Ave in St Paul, which is currently the Grandview Cafe, owned by restaurateur John McCarty. McCarty owns that, Louisiana Cafe and Muddy Pig of St. Paul, Woodbury Cafe and Minneapolis restaurants Uptown Diner and 50th Street Cafe, and the recently closed Pig & Fiddle in the same building as 50th Street Cafe.

Those locations all list St Paul Development Corp as the property owner, also at 1818 Grand Ave. McCarty also owns the building at 207 Ninth Street S., that houses MinnMed, the medical marijuana dispensary downtown Minneapolis, also showing St Paul Development Corp as the owner. He owns a lot of stuff - I found an article from 2009 where he bought an office building from The Walker Art Center at 1752 Hennepin Ave S (One Groveland Terrace). It would seem he doesn't do much with his properties, so I'd imagine, like most investors, he'd sell for the right price.

“St. Paul Development Corporation” was behind this smaller project in Elliot Park which is now under construction:

Nick wrote: ↑
October 28th, 2017, 11:01 am
“St. Paul Development Corporation” was behind this smaller project in Elliot Park which is now under construction:

Let's make sure we're searching the forum before making posts