i love his point... city should up their vision for this parcel. i'd like to see an out-of-town developer bid this.

mullen wrote:i love his point... city should up their vision for this parcel. i'd like to see an out-of-town developer bid this.

Whether its a local or national developer, I think the city has made it loud and clear that want something bolder here than just another box with drab cladding. It's about f...ing time!

I don't want to get to much into the Ritz Block on this thread, but I think the city verbalizing higher expectations for the Nicollet Hotel Block actually raises the bar for the Opus project given it's kitty corner to this block. At least I'm hopeful...

I'm hopeful as well. I imagine this site to have a water look to it, similar to the Aqua building in Chicago, to represent that the gateway to our city was the Mississippi. Fitting because it was the former home to gateway park

So just blow this up to 20 stories and you're set! 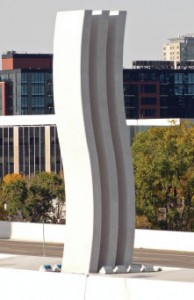 Also, Gateway park was across the street; actually still is. You may have seen the fountain and flagpole?
Q. What, what? A. In da butt.

seanrichardryan wrote: Also, Gateway park was across the street; actually still is. You may have seen the fountain and flagpole?

For the most part I think Lileks is pretty good but sometimes, and too often for my taste, he goes from snarky to being a jackass. This is one of those times.

I just don't think he truly understands how many big developers, yes even out of town ones, have an eye on Minneapolis. It's more than anyone can really think, besides the pipedreamers, they might be a little high

I think you're wrong on that. He's as interested in architecture and urbanism as anyone—and he's in a position to hear things and talk to people. This is a guy who has painstakingly documented dozens of past and present buildings in the city of MPLS and who genuinely cares about the success of the city and its downtown. He also works for the biggest paper in the state. I'd be willing to bet my hat that he's not only heard all the rumors, but seen plenty of renders and sketches and half-baked proposals.

Everything he writes, especially for the Strib, needs to be read through the lens of an entertainer. 90% of what he puts up on the Strib is satirical in nature and/or voice. Sometimes it's borne out of genuine cynicism, sometimes he throws red meat at one constituency while winking at the opposing viewpoint, and sometimes he just goes slightly gonzo journalist. And while yes, he can be a jackass, I don't read it as being a critical jackass, but as an over-the-top/trying-too-hard/joke's-not-working-but-he's-sticking-with-it-and-he-doesn't-care-if-you-hate-it jackass. The annoying type, not the hurtful type.

This particular article isn't a cynical, woe-is-MPLS, what's-the-city-smoking criticism of the RFP. His premises are far too ridiculous to be serious. What he's done is a beautiful example of high-quality satire: he co-opts all the arguments that the taking-themselves-too-seriously crowd would be making and dials them up a notch to show just how bonkers they are. Think of it as a sort of Colbert Report in print.
The problem with being an introvert online is that no one knows you're just hanging out and listening.

Ah I see. I think people need to start warning when it's satire. People say a lot of dumb things on the internet now a days it's beginning to be harder and harder to tell when people are serious or joking.

I'm wondering if the recent Strib articles about Minneapolis towers is some kind of "warm-up" for a possible announcement on a new (bigger) building....

grant1simons2 wrote:Ah I see. I think people need to start warning when it's satire. People say a lot of dumb things on the internet now a days it's beginning to be harder and harder to tell when people are serious or joking.

The following sentence is written sarcastically:

As I said I like Lileks more the most part but when you use satirical snark, especially in a newspaper which by definition is non-satirical, the satirical nature of a piece isn't always clear. And when you combine a satire with snark on somewhat regular basis you are going to come off as a jackass eventually. If only for the reason it looks like nothing is quite good enough for you.

That was pretty clearly satire. I don't think it's necessary to spell out that fact. Granted, occasionally someone who isn't familiar with The Onion will take one of their stories seriously, but that doesn't mean that they should have a big "Warning! This site is satire!" on the top of that page. Likewise, anyone reading that story should be able to pick up the satirical writing style.

Was out of town earlier but wanted to quickly lol @ this thread
Nick Magrino
@nickmagrino
nick.magrino@gmail.com

Council Member Frey's comments to the Journal are very encouraging, and this article is just good in general. Props!

Surrounded by 2 empty plazas, a blank wall, and a parking lot. Have it, developers! Sexiest plot in the city. It's your lucky day.
Aaron Eisenberg / Realtor, Keller Williams Integrity
612.568.5828 / aaron@agentaaron.com / 1350 Lagoon Ave #900
http://www.agentaaron.com

Surrounded by 2 empty plazas, a blank wall, and a parking lot. Have it, developers! Sexiest plot in the city. It's your lucky day.

You gots to chill. Do you know the plans for this part of downtown? Here let me give you a hint, that parking lot is basically as interesting to developers as an ant is to a 5 year old. The empty plazas are only empty certain parts of the day because the population in that area is still relatively low. The blank wall is the library.... like.. what? There would be a skyway connection to in my opinion one of the coolest buildings in the city. You're facing Washington ave. and 3rd both spots where retail is growing. The MPRB is planning for a greenway to reach into this part of downtown to flow to the river, which fyi the entire riverfront is going to be going through a makeover in about 4 years. I just could keep going but I don't want to waste more time, I think you get it.

Surrounded by 2 empty plazas, a blank wall, and a parking lot. Have it, developers! Sexiest plot in the city. It's your lucky day.

Wow ...well there you go folks, an optimist and a pessimist.
Post Reply
1994 posts