acs wrote:This apartment bubbly is going to burst and we'll all be left with this crap for a very long time.

This is why we keep having apartment buildings proposed...

I hate the eagerness to lump everyone together, but are some posters comparing this actual project to an imaginary project? Or am I misinterpreting complaints? No one's stopping any of our posters from bankrolling a $250+ million dollar tower that they would like to build.
Nick Magrino
@nickmagrino
nick.magrino@gmail.com

Nick wrote:I hate the eagerness to lump everyone together, but are some posters comparing this actual project to an imaginary project? Or am I misinterpreting complaints? No one's stopping any of our posters from bankrolling a $250+ million dollar tower that they would like to build.

Yes, but I said "alleged" and I was under the impression that the other version of this project was in fact quite real, but isn't what Opus is doing.

And FWIW, yes, when I get $250M I will ABSOLUTELY pour that money into the city (half joking -- I always thovught to myself that if I ever am lucky/good enough to become a big-time developer it would be fun to "donate" one project a year/cycle to the city, and make it a zero CAP project that's higher quality than a for-profit developer would ever construct. A different form of charity, if you will, for people like us to appreciate).

Do we have to have a bankroll that large to critique this project? I mean everyone else does all the time, so presumably you all are one hell of an elite group of Urbanists!

seanrichardryan wrote:They should place the ramp in the center and build around it like a donut. Just saying.

The issue for me is that when there is an opportunity to develop a whole block a developer should maximize the design and create more of a destination. What I mean by this is that the IDS or the Pillsbury Center atriums didn't happen by accident... the developers and / or the tenants saw the potential of a full block and the value of creating a "public" space with dramatic views and a place to see and be seen. A sense of space and place. The North end of the mall is lacking density - for sure - and these buildings bring the much needed element of population and street traffic, but needs more. Having the minimum (if even that) square footage for retail/restaurant is not going to drive many people beyond residents to that area. The retail space planned is good - but isn't designed to allow for potential larger retailers. It is designed for the least risk - tiny little shops that mainly service the four or five residential buildings on those blocks.

I know I am sounding negative but one of the core values taught to architects is "build great things". I am a realist and I know that there is is always compromise and many other factors (reality) to work around... but we should always expect our developments to add as much as possible to the city and it's residents. I think that if the city really wants to get that population up to 70,000 as fast as they say, they are going to need to push for more dynamic spaces that draw people to distinct areas around downtown. Northeast has as much activity as downtown and it is only about a dozen blocks in area. It is so desirable because it has a great variety of retail and restaurants and is extremely walkable and diverse.

Just my two cents. I am always glad and excited to see new developments and I am sure that these will be great. I wish that we were seeing more exciting spaces and the potential for more variety within each project.

I updated my model a bit.

I know this is asking a lot.....but could you put this in Google maps with Opus Ritz building, UP Nicollet Gateway, 4Marq, Excel? I would be cool to see the "new" Nicollet north end!

you can click the link in my signature to load any model, that I've made public, in google earth... including 4 marq, nic on 5, xcel, ritz block, eclipse, and nicollet hotel block/gateway.

If you don't want to do it yourself, I'm loading them all in google earth now. I'll take a before and after snapshot and post.
m b p's Minneapolis Sketchup Models 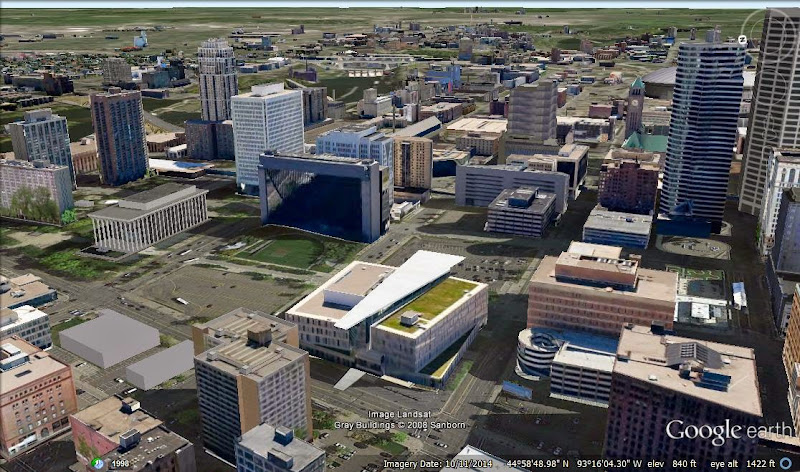 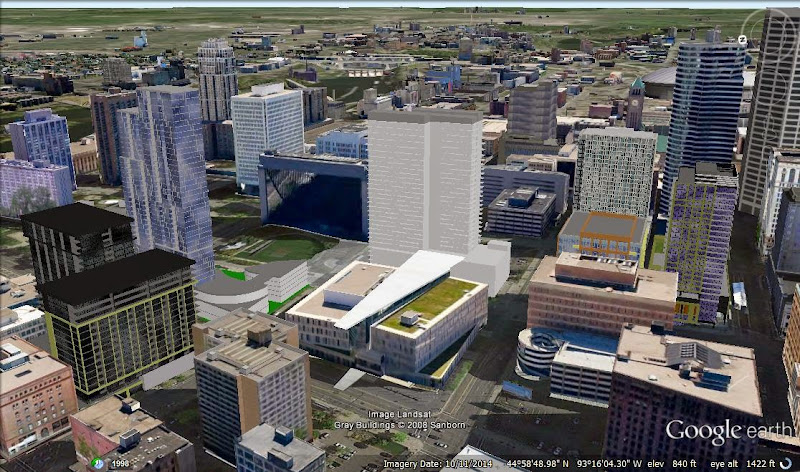 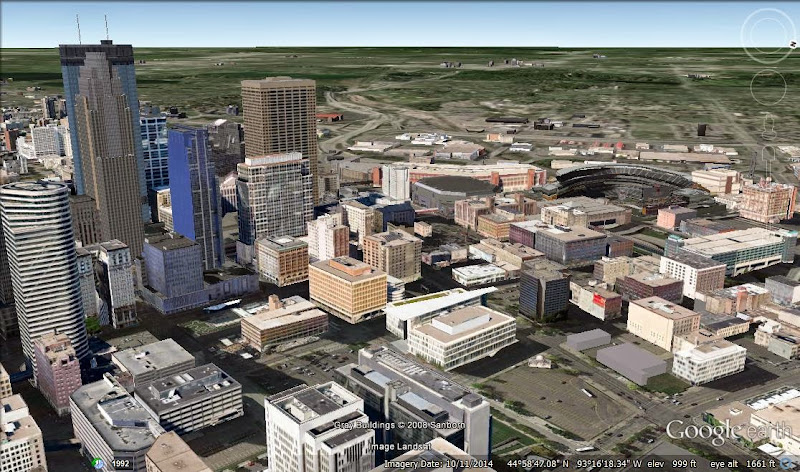 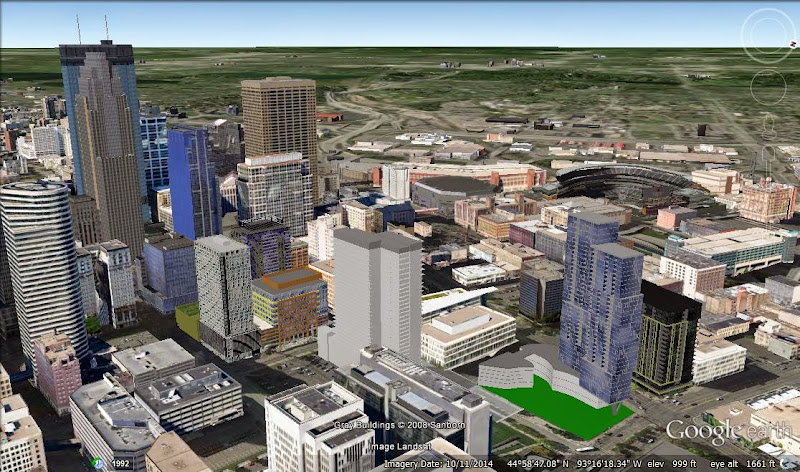 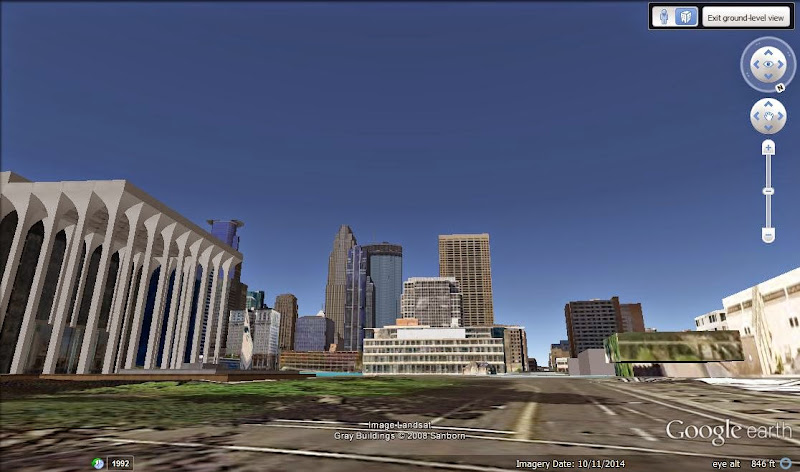 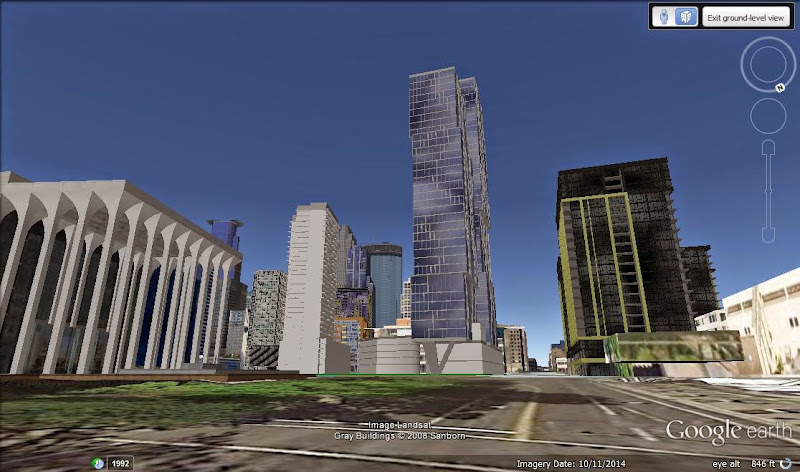 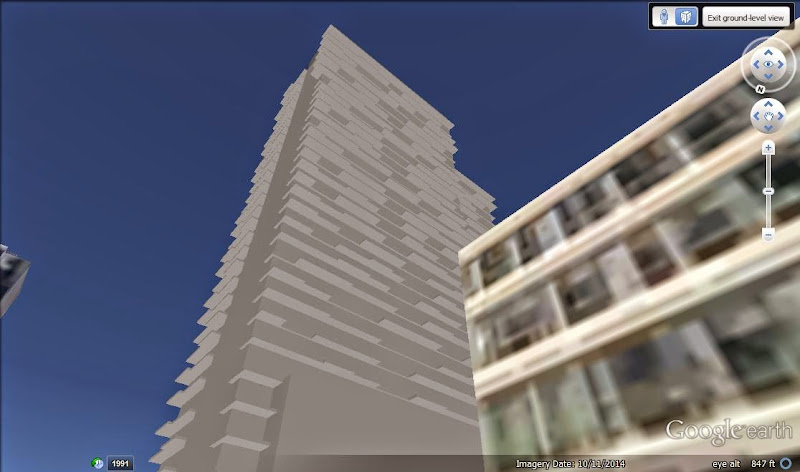 Does anyone know if Opitz is taking cues from the Wave in Chicago? I like how the balconies add movement/dimension to what they are proposing. Still hate the "podium" base along Nicollet.

Ok - looked at the proposed design fronting Nicollet again. Lots of glass fronting the Mall, but one entryway? Do these developers NOT read/listen to studies/experts on how to create a successful building design at the street-level in an urban environment? To be successful and to create an exciting street presence - the more individual storefronts/separate entrances the better. I hope the city gets on them for this!

There's a lot of room for hope! I think there will be some significant design changes to the Nicolet Mall side to create a more pedestrian friendly presence. From the city's EAW that TwinCitizen's linked in a previous post. The city expresses they are dead serious about this aspect of the project:

It is important to note that City Staff has expressed strong concerns regarding the design of the
site as it has not been considered in a holistic fashion. This results in two similarly designed
buildings with poor urban design that incorporate above-grade parking facilities resulting in
inactive floors that directly abut the public streets and adversely impact the pedestrian realm.
Feedback provided to the developer is noted as follows and has not yet resulted in any
substantive design changes:
 The five floors of parking fronting along Nicollet Mall are a major concern for Staff
considering the prominence of this downtown development site;
 Providing active functions along Nicollet Mall is a basic urban design principal that has been
largely ignored by this concept plan.
 Substantial public investment is being dedicated to improve Nicollet Mall and the
expectation is that development must respond to that investment. Additionally, the
Downtown 2025 plan states that Nicollet Mall should be a “must see destination”. Parking
located above-grade and fronting on Nicollet Mall is not a “must see”.
 The developer has control over an entire City block and has not demonstrated any
alternatives to above-grade parking. While there are a number of options for re-designing
the site, some options that staff has discussed with the developer include:
o Incorporating below-grade parking;
o Providing structured parking in the center of the site that serves both Phase I and
Phase 2.
o Altering the building footprint to create additional depth, allowing for units or
other active uses to front along Nicollet Mall, while still providing enough space for
parking and circulation at the interior of the site.
o Extending floors 2-6 above grade (cantilevering over the wide drive access) to
allow space for active functions along Nicollet Mall, while still providing enough
space for parking and circulation at the interior of the site.
c. Identify measures incorporated into the proposed project to mitigate any potential incompatibility as
discussed in Item 9b above.
If variances from the Nicollet Mall Overlay standards are required, potential mitigation factors
that would be evaluated by CPED Staff and the Planning Commission could include
enhancements to the Nicollet Mall pedestrian realm and the public benefit related to
Ritz Block

I was also encouraged by that section. I think (hope) this CC will push Opus on doing a decent job with the urban frontage here, as opposed to the last CC that was apparently just like "Oh, Xcel wants no retail on the retail mall at all? Sure thing! No worries!"

Thinking bigger, what I'd like to see, but probably won't, would be for the whole building being mirrored on the east-west axis, putting the tower on the 4th St. side and the garage entrance off of 3rd. I'd find it more asthetically pleasing to have the tower be closer to the other towers, and, more importantly, the Library's garage entrance off of Fourth, where you turn into and out of a one-way street across the contraflow bus lane, is sub-optimal and shouldn't be repeated when the opportunity easily exists to use a different street for access. Or, better yet, garage access could be via that alley that they're putting in instead of a dedicated curb cut.
Joey Senkyr
joey.senkyr@outlook.com

Ugh. The way this relates to the library in mbp's models is just appalling. Who designed this atrocity?

Latest story on the Star Tribune today if you haven't seen it:

nBode wrote:Ugh. The way this relates to the library in mbp's models is just appalling. Who designed this atrocity?

Well, let's not have too many expectations here. This is the conservative Opus developing this project. I think we can expect the city to insist on some revisions to make the pedestrian realm along Nicollet Mall better and that will happen. And it should end up to being a pretty decent project. It's quite a bit better than Nic on Fifth. But to think there will be great context to the surrounding built environment is a pipe dream.

City Staff has expressed strong concerns regarding the design of the site as it has not been considered in a holistic fashion... Feedback provided to the developer is noted as follows and has not yet resulted in any substantive design changes:

The latest details of Opus’ plan were published on the city of Minneapolis’ website in an environmental assessment work sheet. While not a complete concept design, the documents show some tweaks to the developer’s original vision for the site after the city requested more commercial, ground-level activity.

“We are just always listening to and addressing feedback we are getting from city staff,” Menke said. “The near-term focus has been on the streetscape and really activating the lower portions of the project. For that whole stretch along the mall, we’ve introduced a very generous setback from the property line and incorporated the greening from the Nicollet Mall, and we will have that strong block of green that will continue down to the river.”

Basically the city had to fight Opus (again) for the token streetscape improvements they got.

Aville_37 wrote:Ok - looked at the proposed design fronting Nicollet again. Lots of glass fronting the Mall, but one entryway? Do these developers NOT read/listen to studies/experts on how to create a successful building design at the street-level in an urban environment? To be successful and to create an exciting street presence - the more individual storefronts/separate entrances the better. I hope the city gets on them for this!

Reminds me of the Dunn Bros. area of the library. So many entrances, so many "Do not enter" signs.
i talk too much. web dev, downtown. admin @ tower.ly
Post Reply
625 posts