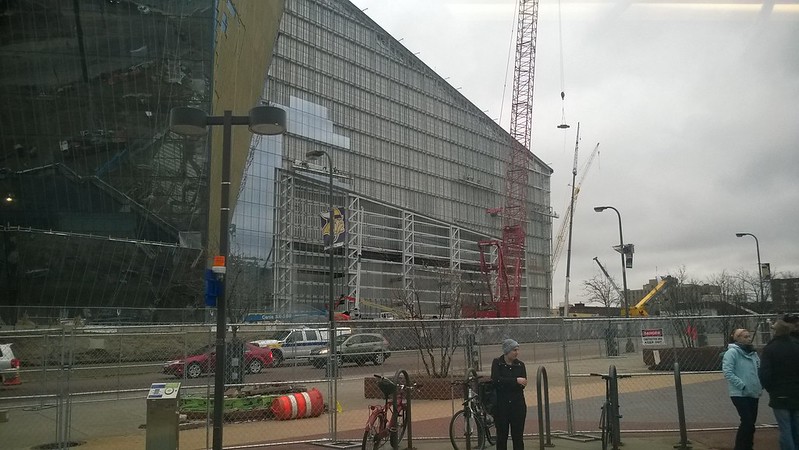 Ah, good, I was starting to get worried about what they were doing with the area above and around the doors...
Nick Magrino
@nickmagrino
nick.magrino@gmail.com

The lower bowl (minus the retractable seats) is now completely installed. They still have to form the additional stair steps and add railings/seats, but the shape of the bowl is done. The second jumbotron is starting to get it's panels, as well. The interior will start coming together at a faster pace now.

Who else has noticed that the US Bank logo on top of the stadium disappears after it snows? Maybe an occupied building will melt the snow. For now it is a nice reprieve.

Agreed. Unfortunately my guess is they'll uncover it when the building is active.

Yeah, I can't imagine USBank paid that much money to have the logo obscured during the Super Bowl.
Joey Senkyr
joey.senkyr@outlook.com

mplsjaromir wrote:Who else has noticed that the US Bank logo on top of the stadium disappears after it snows? Maybe an occupied building will melt the snow. For now it is a nice reprieve.

Chip Whitley wrote:I've noticed this too. Even without snow, it frosts over some mornings. The stadium is enclosed and heated but I'm guessing they aren't heating it to 70. They are probably just heating it to 45 or 50 so water lines won't freeze. I'm guessing when the stadium is fully heated there will be enough heat on the roof to melt most snow. 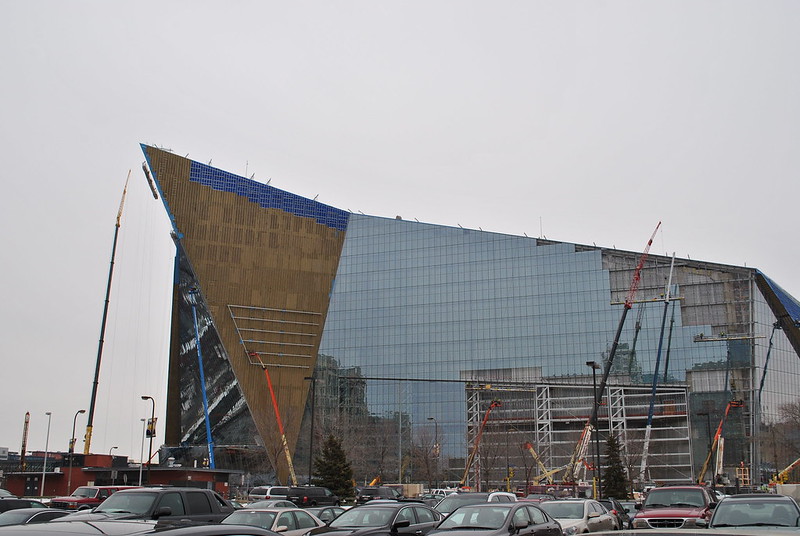 I live to the Southeast of the stadium and wish that it could look like this from our vantage point. Instead, I get to look at the stadium's massive butt crack whenever I head downtown. This side looks nice.

That photo captures nearly all of the exterior glass. And this is supposed to be a bird disaster?

They added a new "Locker Room Cam" today. Shows the interior of the Vikings locker room, a work in progress obviously.

With news that Luke Bryan is coming to play US Bank Stadium this August as the first concert(YMMV as to whether he's a BIG name artist), we can pinpoint when the Vikings' first preseason home game will be. It is now absolutely certain that the first game will take place during Week 3, possibly a nationally televised game. That would allow Week 1 to be used instead as an open-house for the stadium.
Buildings, what buildings?

Not that big. I've never heard of him.

So do we know if this is going to have continuous concourses inside? Like many, I've been hopeful that Rollerdome (actually running, but same problem) will return, but I got thinking that I'm not sure if we even know whether the concourses will go all the way around.

I don't really know who Luke Bryan is, but he's a pretty huge deal. He had a show at TCF Bank Stadium last summer, and I believe it sold out. Besides Kenny Chesney at Target Field, it was my busiest pedicabbing night last year. Country music fans seem to get a kick out of riding in those things.

Oh country music. I've got virtually no knowledge about that

This is all I know about Country Music

Can someone explain why the four corners of each scoreboard are left open?
Post Reply
2078 posts