Grant and I are here, anyone else

Q&A is off to the races, and of course the first question is about traffic.

Didn't make it to the meeting, but I'm interested in what those who did have to think. 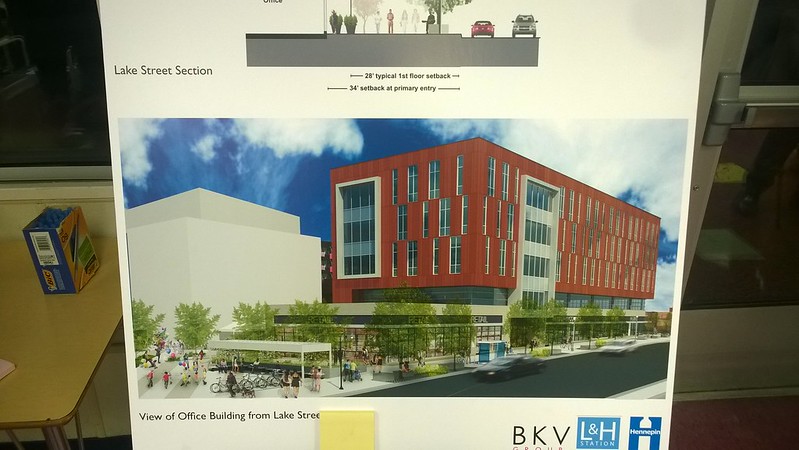 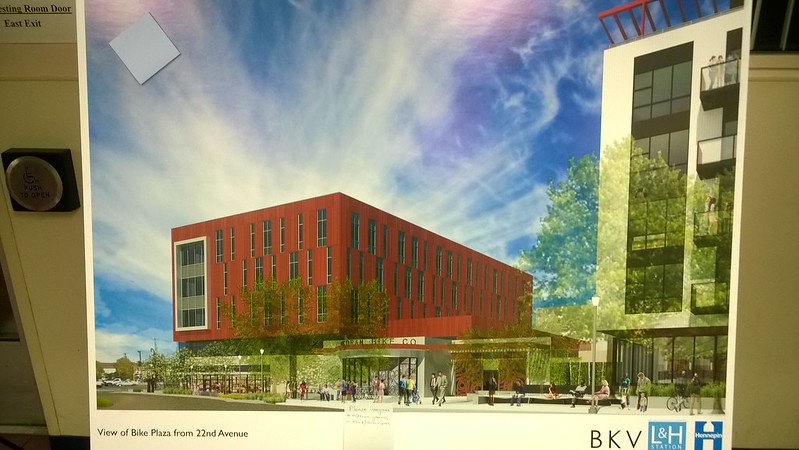 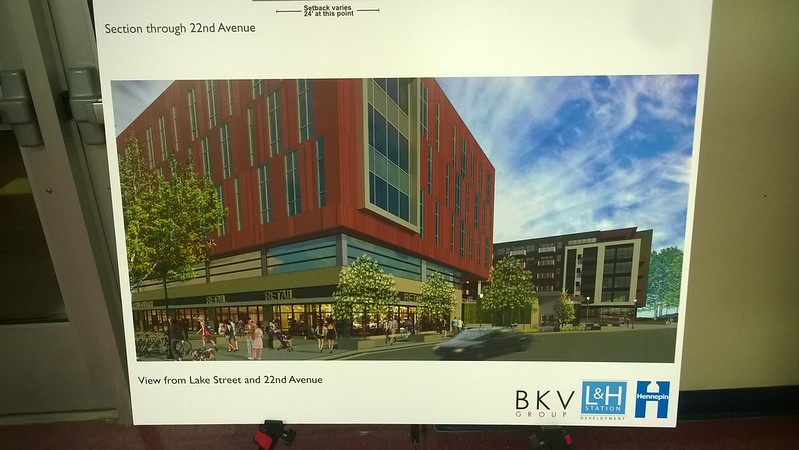 Looks way more attractive than the last time! Any indication about when they'll start?

Thumbs up. Great for the location.

Thanks for the pictures Grant. Any feel for the general vibe from the public at the meeting? What were your impressions of the meeting?

General vibe was that most people were just concerned about traffic and where the cars will go. Seemed to be a lot of approval overall from what I heard. Also I heard a guy who works with MCTC, how he saw an animation of their new facility. So at least we know that's still alive

Think of the cars!

Yeah there was mostly just concerns about traffic and parking. One woman was really worried that she wouldn't still be able to drive a mile or two to get to the YWCA. Despite there being plenty of parking in the project, people were worried that parking was going to spill onto the streets. Someone from the City was there and explained that if the city was petitioned they would do a parking survey to determine if a critical parking district would be needed. And then someone complained that they'd need to pay to park in front of their own house, at which point I had to restrain myself from yelling at him.

But anyway, I took some notes on some other things too.
Southside ABE
The sale of the land by MPS to the county is expected to close late March early April. MPS is looking at a site "in the neighborhood" and also adjacent to South High, so the two blocks north of South High Field, as twincitizen identified in the Southside general topic, are probably a good bet. It's expected that the school will take 3-8 years to vacate the current building. They're looking to combine the ABE (Adult Basic Education) and Transitions Plus (a program for people with disabilities) into a single site.
Phases
What we're seeing here is Phase 1 obviously. The timing of the remaining phases will be dicated by market forces but really most will be dictated by the timeline for MPS to vacate their site. It sounds like the plan is to move around the block in a clockwise function. They're expecting Phase 1 to take 16-18 months, and subsequent phases, since they're smaller, to only take 10-12 months. Of direct interest to me, the reason the building on the South West corner is separate instead of being part of the larger building is that they have a plan if the two home owners on the block (of which I rent from one of them) don't want to sell the property. It's hard to say for sure but it sounds like BKV is probably on board for the whole project. Grant asked about this and the BKV guy gave a mostly non-answer.
Private Street
The plan is for there to be a private/public street (public access, private ownership) going through the block that aligns with the N-S 23rd Ave. The plan is also for 22 feet for drive lanes, which seem excessive for what is actually a Woonerf (the BKV guy kept saying it like "wurnef" which seemed weird to me but I've never actually heard it pronounced). The streets will be public access, but owned by an "association" made up of the various land owners.
Ownership
Hennepin County will own their building (and presumably land), and private entities will own the apartments and retail spaces. Together they'll all contribute money to the "assocation" that will maintain the common road. The housing will all be privately owned.
Housing
The first phase will be market rate housing, targeting the "Blue Line submarket, which will put it in the range of things like Longfellow Station and Oak Place Station apartments. They were cagey about throwing out exact numbers but around $1200-$1400 for an average 1-bedroom seemed to be something they wouldn't disagree with. They also said it'd be affordable to East Lake St residents though too, but obviously those two statements don't really mesh. The long term plan is to have a variety of housing types, including "market rate," "family oriented affordable," "workforce," and "senior. Goal is to have around 500 units
Public Realm
The building will expand the sidewalk area along lake from 16' to 22' feet, and also just generally remove that retaining wall that separates Lake St from the current building. So this means the block will slope down to meet Lake. As stated earlier the street will be private but open to the public, but also built such that it can be shut down for a event, so there should be some interesting possibilties there. The first phase will include a small "transit plaza" to better connect the LRT to the northwest corner of the site. The Farmers market will also move into northeast corner of the site, though there won't be many changes there until later phases. Max Musicant is actually really excited about this, as it allows them to experiment with programming the space before they actually put shovels in the ground for the large public plaza that the Farmers market will occupy. One lady (the same one that was worried she wouldn't be able drive to the YWCA) was worried that moving from the northwest parking lot (very visible to traffic going east on Lake St) to the northeast plaza (hidden by buildings and not super visible to traffic) would impact visibility, but the head BKV guy put it in the nicest way possible that this market was for the nieghborhood and people arriving by bikes, walking, or transit (to which it would be very visible, especially from the LRT viaduct) and not so much for people speeding down Lake St (that last part was a direct quote or pretty close to what he actually said). There was also some discussion of this being the first quadrant of the eventual densification of the entire node surrounding the Lake St Station, but that's mostly just wishful thinking I think. Knitting together the places on either side of Hiawatha is going to be a really difficult task.
Peter Bajurny
peter@bajurny.us
@FISHMANPET

Thanks for the thorough break down! You have to love some of the concerns that can be brought up in a neighborhood meeting.

This was actually the first time I'd been to a community meeting for a specific project. Not that I was surprised that traffic and parking were basically the only concerns. I think the worries about parking overflowing onto the streets are unwarranted. There were somewhat legitimate complaints about traffic on 31st st, but ultimatly I think that's overblown as well. Apparently a kid was hit by a car at the 31st ave-22nd st Intersection (that's the corner I live on!). Right now there's a lot of pedestrians from kids going to South High from the LRT, and a lot of cars from people going to the P&R on the block. Since those two things are timed together it can cause conflict. But once construction starts the P&R will be gone and most of those cars will be gone. There will still be a lot of traffic on the weekends due to the YWCA, but pedestrian traffic isn't as heavy during those times.

The streets (21st, 22nd, 23rd) here are all pretty narrow, and not something that someone could speed through. Though 22nd between Lake and 31st is a bit wider, for easy access to the P&R from Lake St. Likewise 31st Ave is pretty wide from Cedar Ave all the way to the P&R. If there's concerns at this intersection, I think the real solution is something like pedestrian bumpouts or something like that to calm the traffic and give pedestrians less street to cross and more visibility.

Also strange, there's no parking allowed on either side of my house, except for a small spot by my driveway where basically only a Smart Car or my Chevy Spark could fit. Not sure if that's some attempt at visibility for students walking to school or something else.
Peter Bajurny
peter@bajurny.us
@FISHMANPET

Ultimatly, while I can feel for these people whose car-based lifestyle is being made inconvenient, but at what point do we say "this isn't the place for that lifestyle" anymore. The first politician to say it is going to be public enemy number 1 for people that think there's a war on cars, but ultimately it needs to be said. I don't go to public meetings (if there even are any) for exurban subdivisions and demand they include high frequency fixed-route transit because it's just not reasonable for the land use, so it shouldn't be such a leap to say the same thing on the other end of the spectrum.

Jack Boarman (at least I think he was the BKV guy) said that some parking was needed for the Hennepin County Service Center because of the nature of the clients served and the travel needed to be done by staff serving those clients, and I'll agree with that. But can't we expect able bodied middle class people to not all rely on a car for all their trips? To the lady that, in her mind, couldn't get to the Y to work out without driving because it's too cold, I have no sympathy. it was 14 degrees last night, I was wearing light pants but a good coat along with a hat, gloves, and a scarf. I was fine. A brisk walk to the gym is a great way to get warmed up before a workout, and if you plan more than 5 seconds ahead of time, you should haven problem dressing properly for the weather to make that walk. 0 degrees and below, maybe there's something to that, but last night's weather (which she cited specifically as a barrier, not just Minnesota winters in general) should not be a barrier to able bodied people.
Peter Bajurny
peter@bajurny.us
@FISHMANPET

Always add "at what price?" or "at a price of free" to any of these claims. If people want 200 square feet to store their car in a dense neighborhood, and all the access/engineering that comes with it, and all the opportunity costs for that space, then why do they expect to get it for free?

Fortunately and/or unfortunately, the moderator, chair of the Land Use & Housing Committee, ran a pretty tight ship. If someone was trying to make a comment rather than ask a question, he'd shut them down. However if someone asked a loaded question that needed a response, there wasn't really a way to give that response.
Peter Bajurny
peter@bajurny.us
@FISHMANPET

Fortunately, complaining about strangers parking in front of a house isn't going to sway actual decision makers. It just makes the grouches seem like they're impossible to satisfy. People like that rarely get their way.

Thanks for the info Grant and Peter. I really appreciate the rundown of the meeting and the pictures.
Post Reply
158 posts