min-chi-cbus wrote:I'd say $1,500/mo is at the high end of that income level though, especially if it's a family with children.

I was just replying to the "young professional" thing, which I took to mean single. Some people will pay 40% of their income towards housing, some will pay 20%... the point was more that there are pretty simple empirical tests for these sorts of statements (not to pick on anyone, but I was replying to "I'd think anyone living there probably needs a six-figure income") that often show our assumptions are not necessarily on the mark.

The incorrect assumption I made was the rents, which I assumed were higher. Still, $1,500 is nothing to sneeze at. I used to pay that when living in the North Loop and I could barely do it as a single person. Like never eat out or do anything fun barely.

A few updates to this project. On the west building they are now putting up the concrete beans for the ground floor. This is happening along Fremont so I think that the direction of construction will be going from Fremont to Emerson and then back to 28th street.

On the center block, they have started to put up what looks like rough cut limestone blocks to face the lower interior courtyard and the portion facing that greenway that will be exposed. Looks like the north buildings walls are now mostly up, but the ceiling joists still are needed in a good portion of that.

A stone like face is going up on the inside corners of the west building. Strange that they are working from the inside to the street side. The other projects it is the other way around. Also along 28th they have started working on the Townhouses that will face 28th street. Not sure what the deal is with their parking as it down not look like there will be basements under them.

Stick construction has started in the west building. The townhouses facing 28th look to be 3 levels with the ground floor being the garage level. Looks like they are getting things cleared for the townhouses that will face Emerson.

Noticed something odd about the townhouses. The unit on the corner of 28th and Emerson has a traditional bay window while the others have a more modern squared-off bay window. It seems odd but I'll reserve judgement until it's done.

David Greene wrote:Noticed something odd about the townhouses. The unit on the corner of 28th and Emerson has a traditional bay window while the others have a more modern squared-off bay window. It seems odd but I'll reserve judgement until it's done.

Have we seen any renderings of the townhouses yet? Maybe they'll make it look a little San Fransiscoesque and have each of them have a different look. I would love that if they did it right!

David Greene wrote:Noticed something odd about the townhouses. The unit on the corner of 28th and Emerson has a traditional bay window while the others have a more modern squared-off bay window. It seems odd but I'll reserve judgement until it's done.

Have we seen any renderings of the townhouses yet? Maybe they'll make it look a little San Fransiscoesque and have each of them have a different look. I would love that if they did it right!

Yeah, that would be neat but it doesn't seem like that's the case. All of the bay windows are the same except the one on the corner. It looks odd right now.

there are renderings in the plans, I remember seeing them, they looked lovely

I remember them too and they are one of the nicest components of the project. You almost wish they would make them condos to increase the option of more home ownership near the Greenway.

The bay by the alley is also traditional so there's some symmetry. It looks much better. They must not have had that built out last time I walked by. 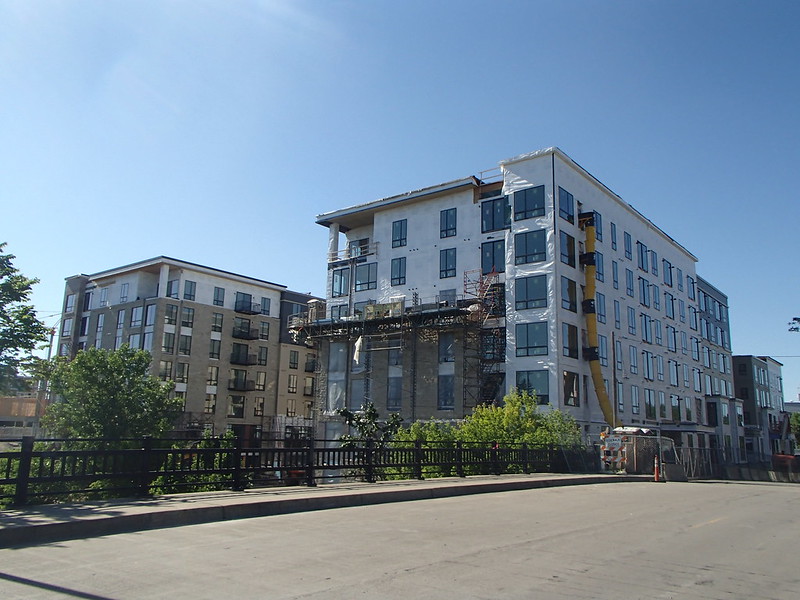 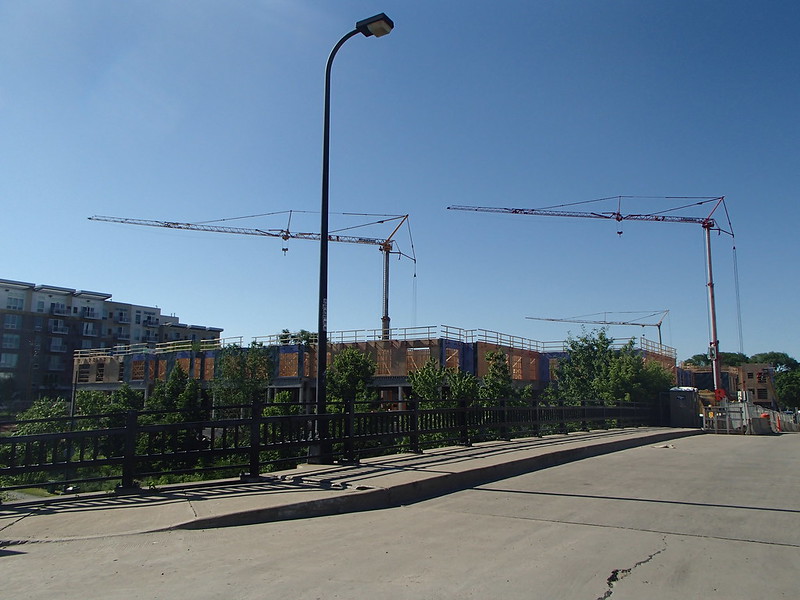 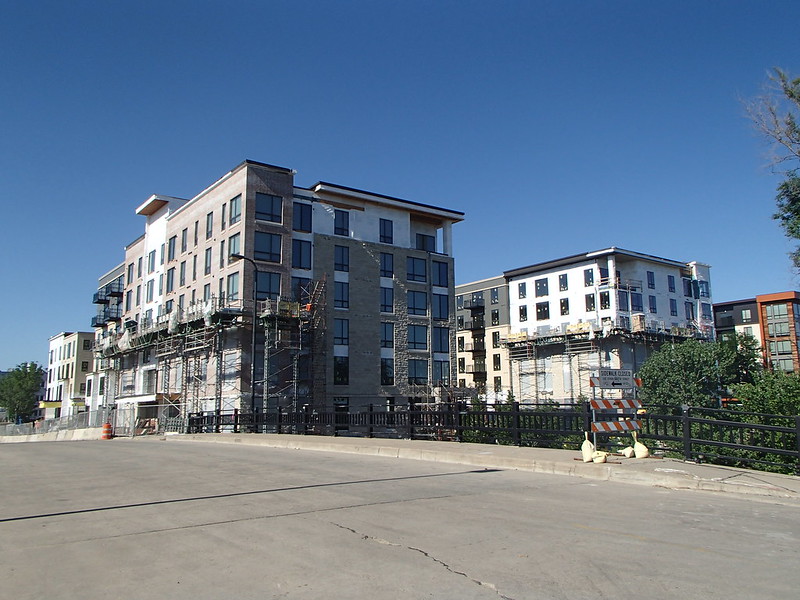 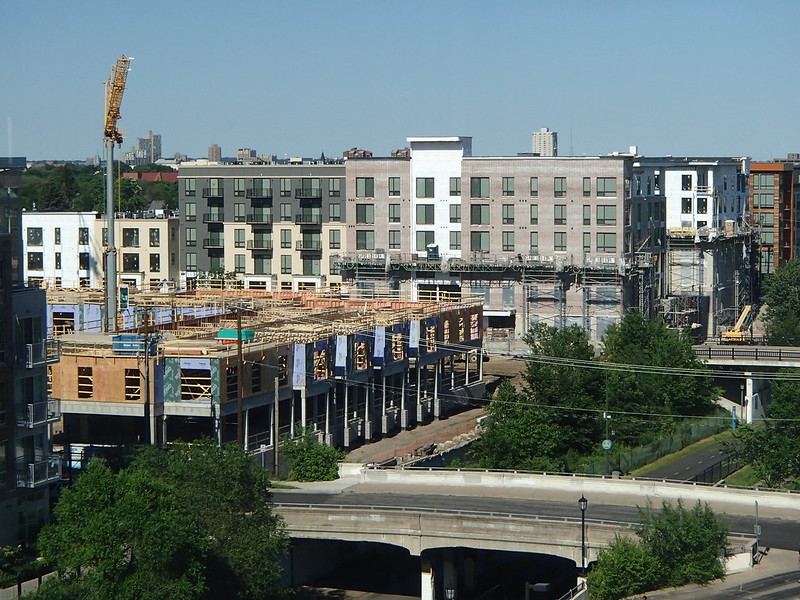 Shot of the townhouses on 28th:

The exterior stone and brick are progressing on the center building. Looks like they are starting to work on footings for the bridge to connect the promenade. The second story of stick is well along going from both ends toward the middle on the west building. The first grouping of Townhouses is pretty much done except for exterior siding and finish work on the interior as windows have been going in for a week now . The second set of townhouses has their foundations done and the metal supports for the garage doors are up and set.

They are now working on the final level for the west apartments. The townhouses facing 28th are now being clad in stone and brick and the second set of townhouses are having the roof added on now.
MOre brick work is progressing on the center building and we will see how soon they start working on the pedestrian build for the promenade. Hoping all will be enclosed by the first snow fall. and exterior done by the 1st of the year.

People were moving into the center complex this past Thursday.

I was looking on the website to see if I could find floor plans of the town homes. It looks like they have everything but those listed. Are they set for a later opening date and that's why they aren't up yet?

Nathan wrote:I love how European scale and different and finishedthe southern wedge is getting

Agreed! I've been waiting for this for a long time.

I popped into the center building lobby to check it out. There's a new rendering up in there.

The townhomes are coming along. I wish Minneapolis had a bunch more of this type of building scattered around town. 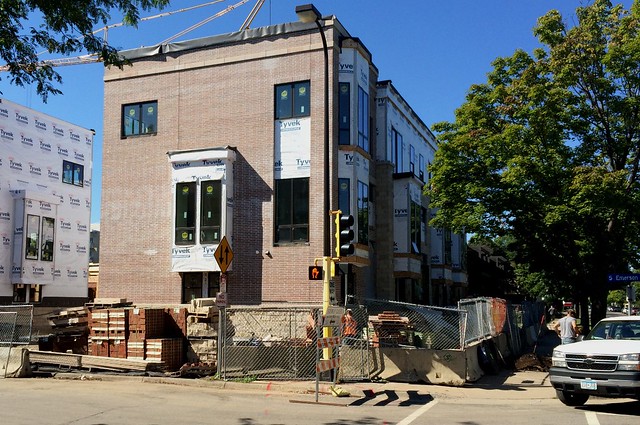 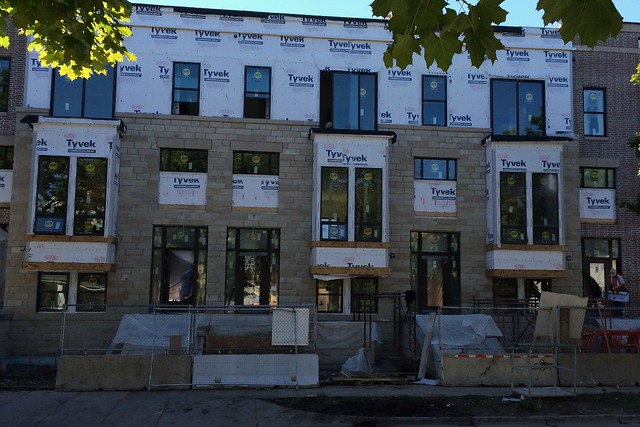