The results of a vote at the Annual CARAG Neighborhood meeting were to officially change its name to "Uptown South." As I understand it, the City still needs to approve the change, but since Bender and Frey both spoke at the meeting, it should be a go.

Oof. Should have gone with Bryant Square.

scottiem wrote: ↑
September 19th, 2018, 8:56 am
The results of a vote at the Annual CARAG Neighborhood meeting were to officially change its name to "Uptown South." As I understand it, the City still needs to approve the change, but since Bender and Frey both spoke at the meeting, it should be a go.

I though it was South Uptown, not Uptown South.

They prefer US to SU.

What about Franklin South!! (FU) lol

Someone needs to open a soup restaurant in South Uptown and call it Souptown thank you for coming to my TED talk.
Peter Bajurny
peter@bajurny.us
@FISHMANPET

The ballots read Uptown South, but I'm not sure if that really makes a difference for me. I was pulling for Lakewood or Bryant Square, but a-well! I mean CARAG was as least distinctive if not odd. That said, I'm down for this new soup restaurant--right in season too!

Why not South Of UPtown, or SOUP?

I made this a long time ago, not necessarily to be taken seriously 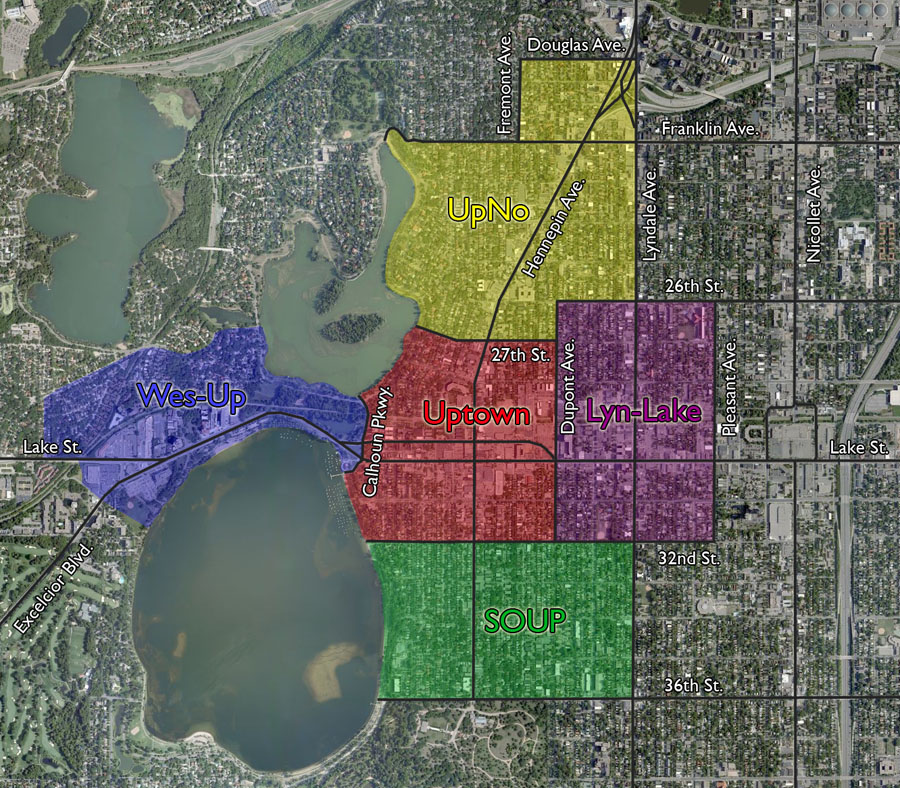 I had fully convinced myself that I was the first person to propose "SOUP", until I searched the forum and saw you posted this same map back in 2013. Your map definitely planted the seed, because I was suggesting SOUP as far back as 2015. Earlier this year, I did suggest it directly to the CARAG board/staff via Twitter, so maybe that played a role (they liked my tweet, FWIW)

Can we get some clarity on the new name? Scottiem here is saying it read "Uptown South" on the ballot, but everyone on Twitter yesterday said "South Uptown" (some even suggesting that the "SOUP" gimmick was maybe part of what led it to victory over Bryant Square). Knowing those were the two choices, I am surprised at the results, but I think they made the right choice (even if they didn't merge with ECCO to align with your map). Was "Lakewood" rejected in an earlier round of balloting or something? I know they did an online poll several months ago and that was another one of the options from the poll.

Bryant Square would have been a fine choice over CARAG, but (annoyingly) there's already another neighborhood east of 35W squatting on "Bryant". That neighborhood's use of Bryant isn't even justified, as unlike most of Mpls official neighborhood names, it doesn't appear to be based on a neighborhood park or school, and is likely named after the same Bryant as the Avenue.

South Uptown (or Uptown South) was the correct choice IMO. It is exactly how I described where I lived, when I lived in CARAG. People in CARAG don't even know they live in CARAG, outside of planning/politics/neighborhood org nerds. South Uptown may not have a nice, pretentious ring to it as Lakewood or Bryant Square, but goddamnit people will know exactly what you're talking about when you say it.

What? The Great Purple One himself attended Bryant Junior High, the building now called the "Sabathani Community Center".

I think I'd have less of an issue with South Uptown if CARAG wasn't a neighborhood that is also part of LynLake.

fehler wrote: ↑
September 20th, 2018, 8:53 am
What? The Great Purple One himself attended Bryant Junior High, the building now called the "Sabathani Community Center".

Aw poop, I figured someone would school me in history. Of course Bryant neighborhood was named after a former school.

Turns out the ballots were misprinted, but that makes little difference I suppose. I received the name change report from the neighborhood board coordinator and South Uptown is it. There are some interesting results from the couple surveys that were taken, and yes, only South Uptown and Bryant Square were near the top after the last survey. Other names were further down the list and dropped. CARAG was clunky but not without personality--I will (kinda) miss it.

I apologize. This made total sense in my mind when I wrote it lol.

♫ 'Cause Uptown South gonna give it to ya
Don't believe me, just watch!! ♫

Northface and Columbia closing?
Q. What, what? A. In da butt.

Fill the Victoria's Secret space with a Food Hall with Brewery or etc.

I saw Columbia was closing when I walked past earlier this week, but North Face is news to me.

I wonder if there's someone working on assembling property for a redevelopment?
Joey Senkyr
joey.senkyr@outlook.com

Silophant wrote:I wonder if there's someone working on assembling property for a redevelopment?