Another unexpected project along the greenway. Is this still Uptownish?
http://minneapolismn.gov/www/groups/pub ... 172414.pdf 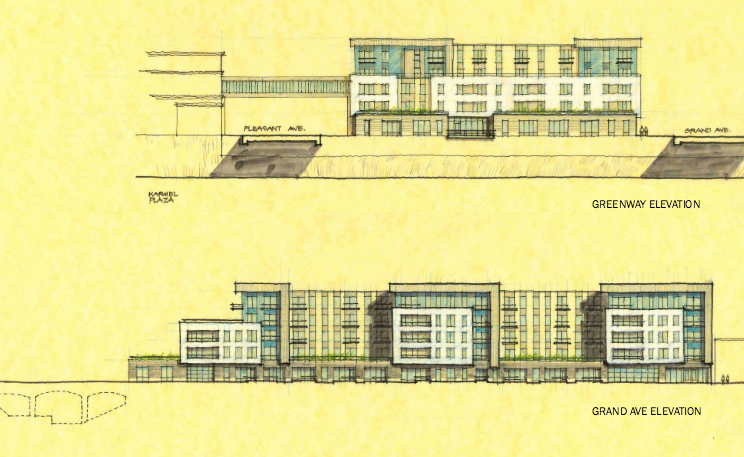 LynLake must have an edge somewhere. This is almost equally near Nicollet and Lake too.

I'm pleased in a way that a developer is offering attention to the immigrant community.

And also looks really good for being such a huge building.

Hmm, Sabri? Likely won't look even close to that
Q. What, what? A. In da butt.

I'm trying not to laugh at the possibilities of a Sabri Skyway.

Looks like Sabri got pushback from the city over the skyway.

I just noticed on their plans that they intend to keep the old buildings squished right up against the trench retaining wall. While I'm sure that idea tickles a preservationist pink, I would hope for a full investigation if the ROW for rail transit is wide enough here.

Keeping those buildings as-is also prohibits any continuous walkway along the south side, though I suppose it could pretty easily be routed south of the old structures.

As you can see, these buildings come closer to the trench ROW than just about anything else, particularly on the wider western portion where everything would be double-tracked.

This is actually one of the wider parts of the trench. The center of the greenway, at all points, is wide enough for double tracked freight between the bridge piers, which is what was there. The other side of the bridge piers was used for sidings to server customers, if needed, this was generally one track but still pretty wide. This particular area looks like it had sidings on both sides, as there's plenty of space. In fact, the actual bike path goes under the bridge where a siding was, and only the walking path is under the "center." So there's plenty of space to run one track on the south side of the center and the other track in the center without re-configuring the trail. And there should still be space to put a walkway on the south side if that was desired. In general though I don't have any idea if anybody has a good idea of what the corridor would really look like with transit.

Also, even though these buildings are not "contributing" structures to the Greenway historic district, they are still included in the boundaries of the district. It seems to be the position of the Midtown Greenway Coalition that the historic designation "protects" the bridges as well as the retaining walls (like here) and even the current slopes in the Greenway, but I don't know enough yet to comment on that. Though not that Sabri would care, he's not coming to us (the MGC) to get our input on this building, so I don't know why he'd really care much about what the MGC thinks historic preservation does vs what it really does.
Peter Bajurny
peter@bajurny.us
@FISHMANPET

I can't get past the name: "rana" in Spanish is "frog," so this sounds like Frogtown to me.

It's also a common female name in Arabic, meaning beautiful :/
Q. What, what? A. In da butt.

It means "wound" in Bosnian

Beautiful Frog Wound Village it is.

It's also a columnist for Time magazine.

Updated plans for the Planning Commission on the 31st: http://minneapolismn.gov/www/groups/pub ... 176410.pdf

They are no longer proposing to retain the two small existing buildings that are right up against the Greenway trench retaining wall, instead proposing a 12' wide promenade. The skyway over Pleasant Ave connecting to Karmel is noted as "proposed/future" on the plans, so I think Sabri is seeking approval at this time without it.

Has anyone heard if Sabri is seeking affordable housing tax credits or anything for this proposal? If it's 100% market-rate, even for the non-senior portion, how can his typical client base (largely Somali) afford to live here? Basim Sabri actually said at the Whittier Alliance meeting that the target market would be Somalis already living in the area, shopping at Karmel, etc. While technically/legally the building would be open to the general public to live in the market-rate apartment units, it seems that Sabri is actively marketing it to the Somali community. I don't think it's too controversial to suggest that a vast majority of the community cannot afford market-rate rents. Am I missing something?

I'd have to imagine there are many Somalis who have been here long enough (or are kids of immigrants) and have been successful enough that they can support a middle class lifestyle.

1) there's also the shop owners at Karmel Square to think about. If they run a good business they could probably afford it as would appreciate being close. 2) the first wave of Somali immigrants in the late 80's were largely well-educated professionals who then sowed the seeds for the later migration. Those baby boomers are looking to downsize and retire as well.

twincitizen wrote:The skyway over Pleasant Ave connecting to Karmel is noted as "proposed/future" on the plans, so I think Sabri is seeking approval at this time without it.

It's Sabri, so he'll just build the skyway while nobody is looking.

EDIT: I try not to be a geography Nazi, but including this in the Uptown thread seems like a huge stretch.

Is this site in Uptown? No, obviously not.
But does it border LynLake? Yeah, pretty much.