Rube Dali wrote: ↑
November 1st, 2018, 2:47 pm
Speaking of jersey barriers, NE corner of Rice and Como has them surrounding the old Stahl lanes footprint. Anyone have info on what's going up?

Whenever the coffee shop opens, it won't be Tim Hortons. The franchisee that operated them closed all of them down.

by mulad
This is an interesting 5-story Flatiron-esque building at 631 Transfer Rd, near University Ave, but from the F&C article I found, it looks like it's just a self-storage place (I don't have a subscription at the moment to fully verify, though). It's wedge-shaped due to an alley that comes up at an angle, nearly all the way to the intersection: 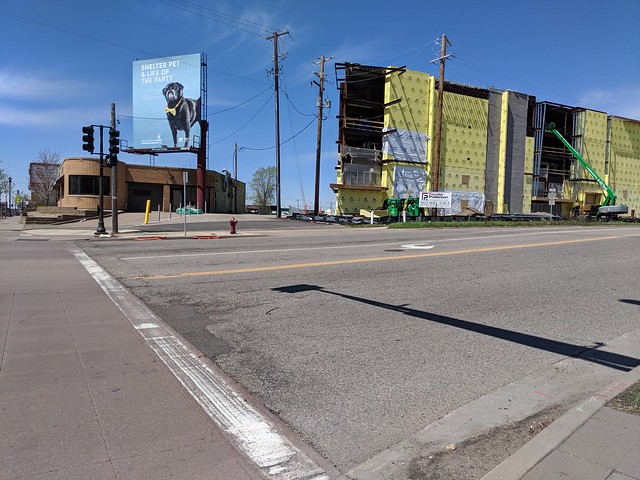 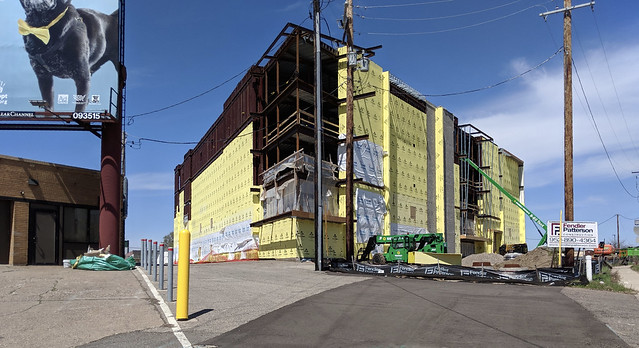 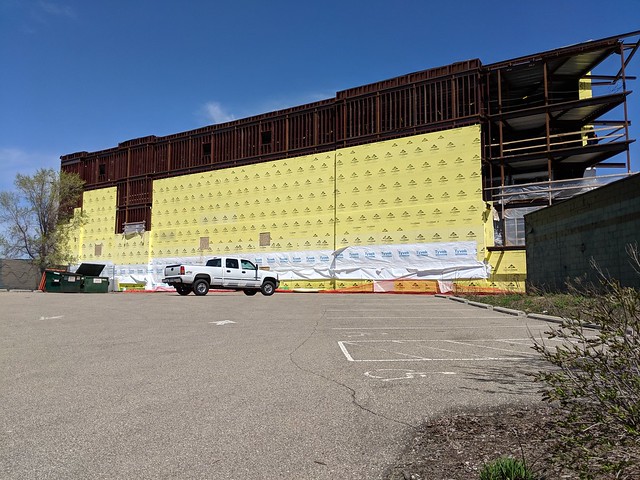 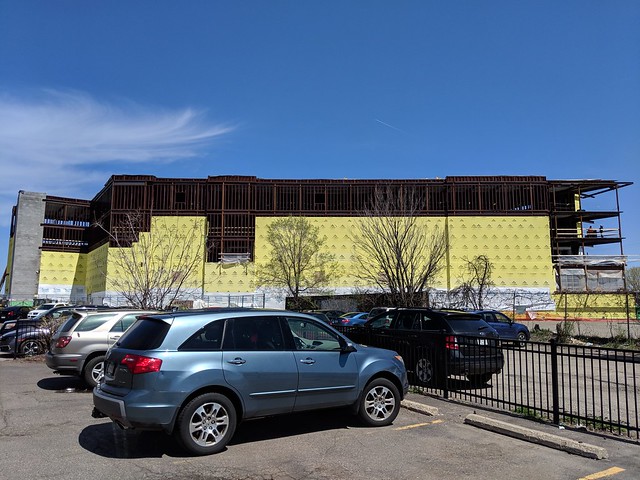 by mulad
Happened across 1554 Grand Ave yesterday, where a house was recently torn down to make way for a 4-story building with furnished apartments (it's less than a block from Macalester College). Apparently they'll be 4-bedroom/2-bath units. 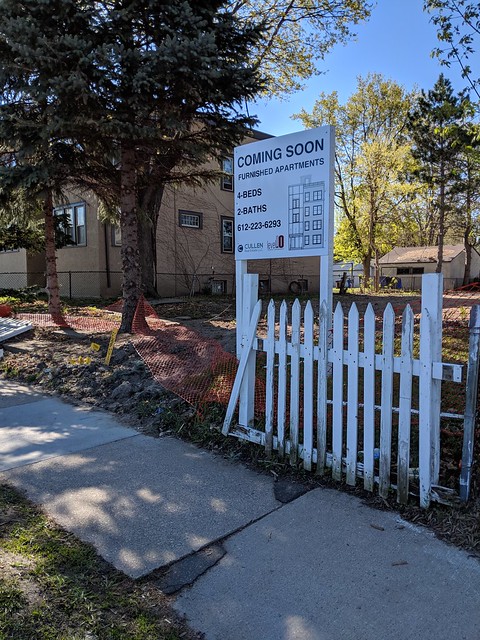 Here's a link for streetview of the old house from 2013 (which I suspect may have already been divided into apartments), just since that date seems to give the best view:

mulad wrote: ↑
May 7th, 2019, 9:48 am
This is an interesting 5-story Flatiron-esque building at 631 Transfer Rd, near University Ave, but from the F&C article I found, it looks like it's just a self-storage place (I don't have a subscription at the moment to fully verify, though). It's wedge-shaped due to an alley that comes up at an angle, nearly all the way to the intersection:

I was glad to see that the lot lines still would allow a connection of Territorial in the furture through the Dry Ice parking lot.

by MNdible
Do you mean Charles Avenue, not Territorial?

by MNdible
Speaking of St. Paul missed connections, does anybody have any insight as to what it would take to properly connect SE 5th Street next to Surly?

MNdible wrote: ↑
May 7th, 2019, 1:53 pm
Speaking of St. Paul missed connections, does anybody have any insight as to what it would take to properly connect SE 5th Street next to Surly?

Saint Paul vacated the ROW of 5th/Territorial when the Pavillion on Berry was built.

by seanrichardryan
Ah yes, Charles Ave. The Pavilion on Berry is a menace.

by MNdible
I was actually talking about 5th Street, directly in front of Surly, not 4th and Territorial. But that's also terrible!

How did St. Paul make so many bad decisions in this area? And are they not interested in fixing them, because it would primarily benefit Minneapolis?

by xandrex
Do you mean by officially connecting 5th to Westgate?

If so, is that even necessary? Would it provide a connection more meaningful than the (probably only quasi-public) one that exists?

by MNdible
Yes, that's what I was talking about.

Is it necessary? No, they're managing without it.

But having a functional grid is a good thing. As it currently stands, there's no (legal) way to drive between Malcolm and Westgate without going back out to University. They're both effectively giant cul-de-sacs. And even the walking/biking situation along 5th is less than good.

by xandrex
I'm all for restoring the grid, and this seems like it could be fairly easy with, what, an easement?

It's probably fair to say this argument is more important once "Towerside" develops more. Alas, we'll probably develop the area and make it impossible to build any of these connections.

by gcm
Is this something new? I haven't seen any mention of it previously. by luigipaladio
A recent drive from downtown St. Paul to downtown Minneapolis was an interesting study in dramatic contrasts. Downtown St. Paul has so much character and now, so much density in terms of residential population. The retail scene is incredibly limited for the number of residences in such a dense downtown area., but there is street life and a sense of place. The drive up to the intersection of Rice and University is an oddd experience, - with the dazzlingly restored Capitol building and it’s very mixed assemblage of state offices (ranging from ugly to elegant) faced to the west by the wasteland of the Sears property and the hotel tower that belongs on the 494 strip. At the intersection, one is met my gaping holes appropriate for suburbia and covered with cars, The intersection detracts from the capitol. Other than some good development at Uni and Dale, the stretch from Rice to the Miday, shows little in the way of energy or development due to the Green Line. Hopefully, the soccer stadium will indeed revitalize the Midway, but is will be a huge uphill climb. Beyond snelling, things begin to pick up, with well restored old building and mundane to interesting new buildings. The increase in residential density is impressive. Crossing the city line into Minneapolis, quickly leads to a seeming explosion of newer construction and interesting complexes. The entire area around the University of Minnesota seems to continue to sprout new construction at an uninhibited pace and that explosion continues all the way to Hennepin and then into. Downtown Minneapolis. It stuck me that St. Paul has a huge amount of undeveloped land, or land that needs to be redeveloped. The voids around the Capitol, the gaps along University, the mess surrounding Allianze Field, to say nothing of the Ford Plant property, means there is room for many, many years of redevelopemnt in St. Paul. But much of it seems unlikely to happen anytime soon - unless St. Paul can lure some big corporations or even middle sized corporations, thee is just not enough demand to build a complex of towers on the River front and in the Midway. Grand Ave. is the most vibrant retail area in the city. The need for residential skyscrapers is probably limited while the desperate need for affordable housing seems almost impossible to pull off at a rate anywhere near the growth in demand. The drive down University is one filled with incredible potential, and some spots of real hope, but it is hope under siege by the lack of sufficient affordable housing and the lack office tenants that could make clusters of towers possible.

This is a donut shaped building, I imagine the floorplates might be tricky for modern office tenants. Why not convert to apartments?

by commissioner
What's the status of the Lunds/Bylery's store on Grand? Haven't heard anything in a while?

Re: RE: Re: Saint Paul - General Topics

This is a donut shaped building, I imagine the floorplates might be tricky for modern office tenants. Why not convert to apartments?

We had some of our offices there before we moved. I much preferred it to Galtier. Much more natural light.

Sent from my Pixel 3 using Tapatalk

by LakeCharles
Ins't Breck Woods almost all in Lauderdale, not St Paul?

by seanrichardryan
411 Lexington Avenue Project by Alatus. Presented on Monday to the Union Park Land-Use Committee