by seanrichardryan
Construction Cams for all the work going on at St. Thomas- https://www.stthomas.edu/physicalplant/ ... era-feeds/

by alexschief
The hotel on E 7th and Jackson is well underway: 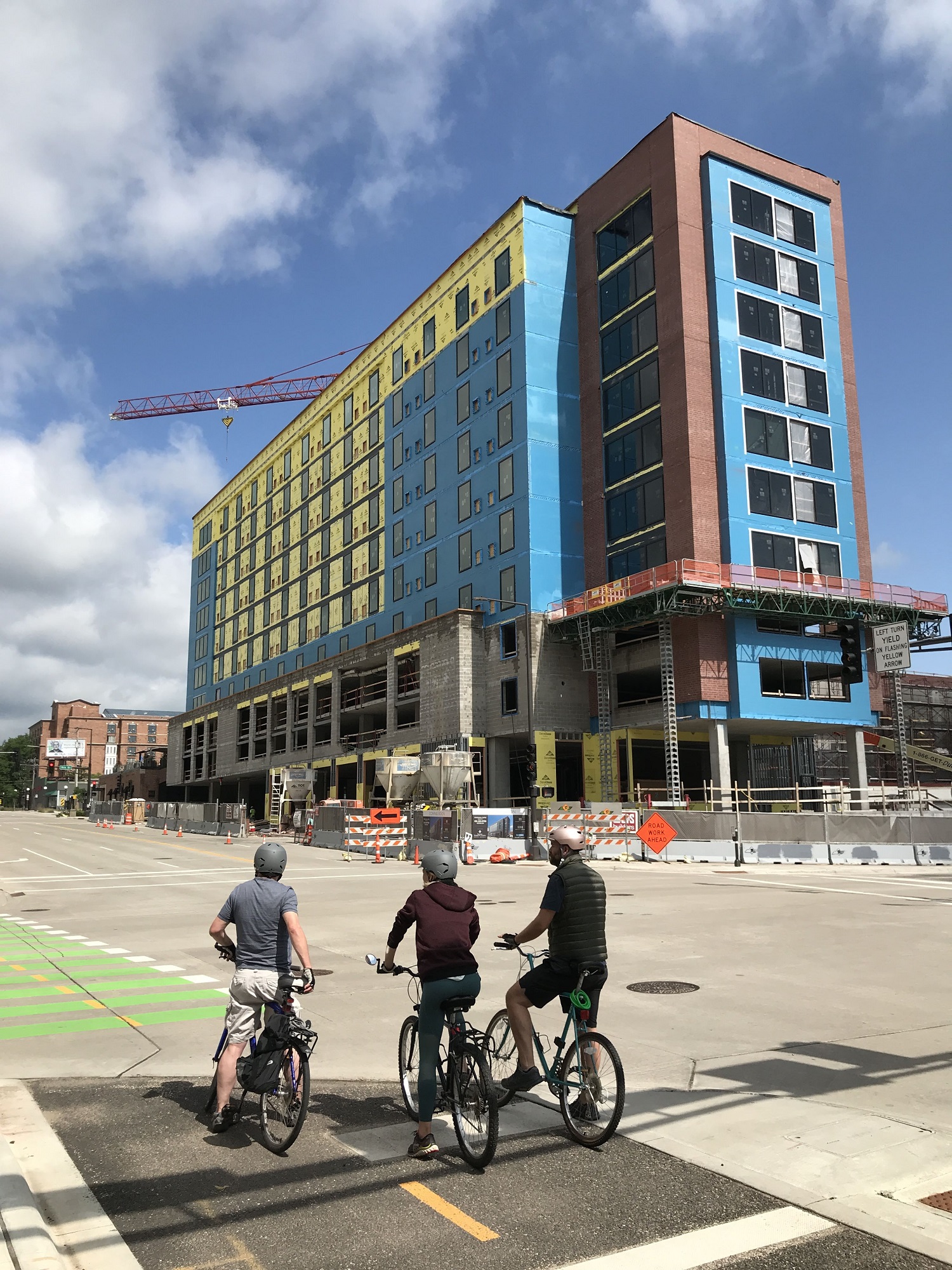 The overbuild at E 7th and Robert is nearly complete: 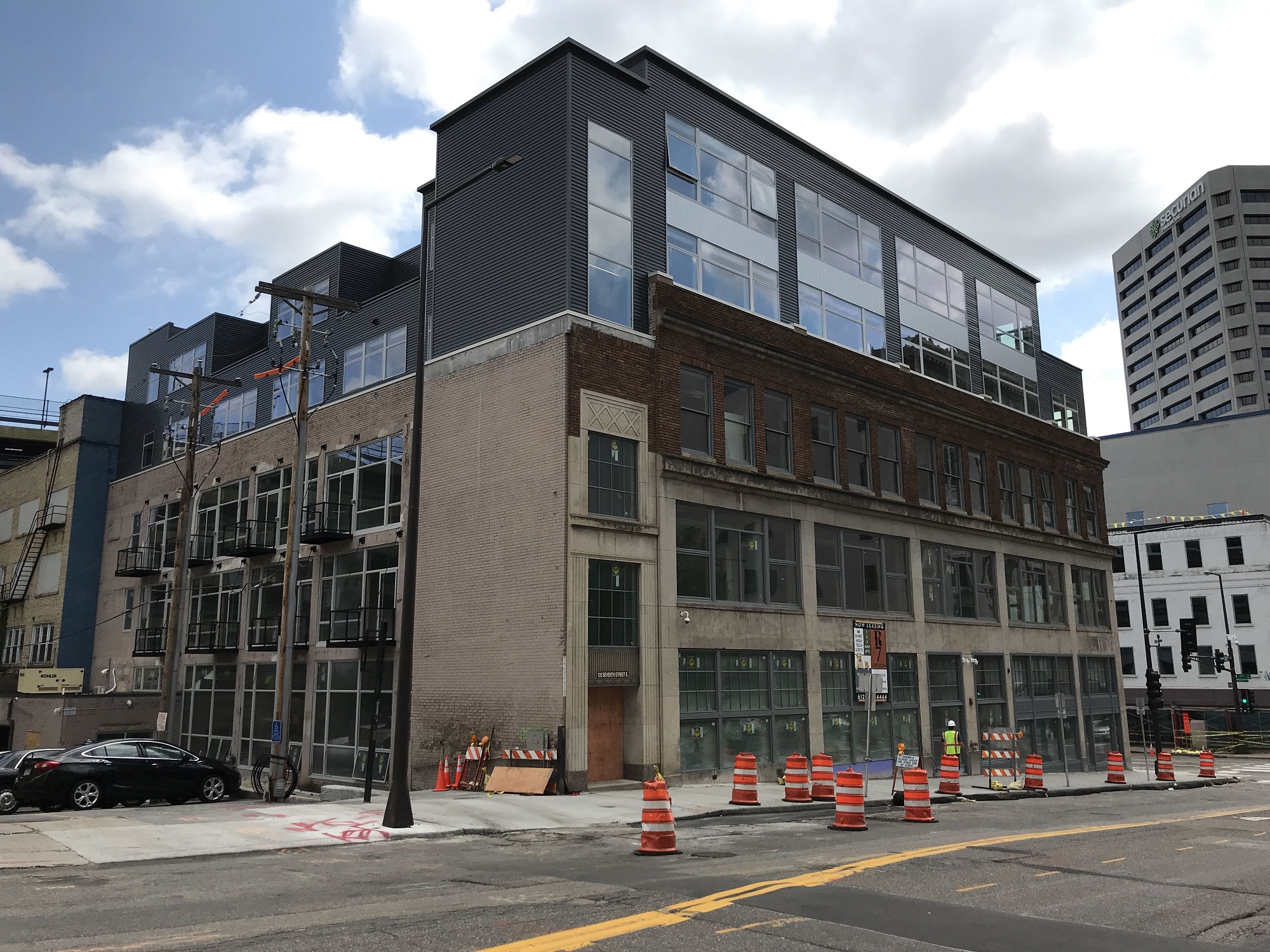 by SurlyLHT
The Walmart is closing on University Ave in St Paul. I've never heard of a Walmart closing altogether, usually they're moving. Last time I was in this store it was a mess and the prices were higher than Target. What are the forum's thoughts? Also I wonder how this area can be re-imagined?

by Silophant
Big opportunity to knock it down and build something actually kinda urban there.

Nick Halter tweeted a couple more details: Hope that Ryan proposal to redevelop the Sears site into government offices goes through and it doesn't just turn into Walmart instead.

by SurlyLHT
This sounds more like Walmart, they've done this all over close one location and open another larger one with food and leave the box behind. I hope we just don't get a bigger box elsewhere.

by Silophant
I'd like to think that even St. Paul wouldn't be shortsighted enough to approve a suburban big box in the Capitol area in 2019, but...

by SurlyLHT
If you removed the Walmart and Herbergers buildings and lots and then moved the Cub Foods and Dollar Tree and TJ Maxx you'll have a huge space to develop. Cub Foods could maybe do another urban concept.

by Minnehahaha
Given that Kraus Anderson recently bought the property, this is really encouraging!

by LakeCharles
Fortunately/unfortunately, St Paul has oodles of huge spaces to develop. Hillcrest, Ford, and even just on University there is the old Sears site, the area around Allianz, and now this. There is no way all of them get developed this cycle, and I'm worried we'll end up in a situation where a big box development will seem more enticing to the city than sitting on a huge vacant parcel for 10 years.

by SurlyLHT
I wonder why they're closing now? What the is the incentive? They don't seem to have anything solid or started for a new location. There must be some lost revenue.

by Rube Dali
Some of the reports about the closing say Walmart isn't looking into replacing the store with another one near the Capitol. I think it was in the Pioneer Press report.

by mattaudio
Does Walmart retain a lease on this property? The reason I ask...

- Walmart was in a similar situation in St. Anthony where they built on the old Apache Mall site.
- They were limited in grocery sales because a Cub was also a part of the development.
- They built a new store in Roseville and closed the St. Anthony store 10 years after it was built.
- Over 5 years after closure, the store is still vacant.
- Since they had a 25 year lease (which I presume Walmart is still paying?) there have been restrictions on what could replace it.

If anything this goes to show how leasing can be messy and how a true business district with distributed ownership has significant advantages.

by Rube Dali
If KA is going to fully redevelop that large superblock, would we expect something from Cub, Dollar Tree, etc. that they too will be closing soon? I think so.

Also, and I know this will sound unpopular, but I think Target, inspite of it's success on University, might be closing that store too if the price is right, if you catch my drift.

by commissioner
I can't imagine anything happening with Cub or Target ( or anything else on that block for that matter) anytime soon especially since they just redid their stores, not to mention that Kraus-Anderson said that they were going to honor the existing leases when they bought that block.

by Qhaberl
I’ve only been there a few times, but from what I can tell that target does really well. With that being said, I wish they would re-develop the blocks closest to University. I believe it’s target that owns the parking lots immediately south of the Hamlin station.

by Minnehahaha
I can't imagine circumstances where the building housing Noodles and Company on the Target block goes away, much less Target itself. Those prime outlots facing University have sat vacant for a looong time. (And you are right, Qhaberl - that Target does very well.)

As far as the Midway Marketplace block, I am really hopeful to see a proposal for the Walmart site, but beyond that? Kraus Anderson owns the recently remodeled Cub building and the strip mall which I believe is fully leased. The Herberger's building was separately owned and not part of the recent purchase. KA might be buying it - it was pulled from the auction of Bon Ton locations earlier this year as the liquidator was working with a buyer, but I haven't heard anything new in months. The medical clinic belongs to yet another party.

So a full-block redevelopment, with all the other large Saint Paul properties currently in play? Not very likely.

by MNdible
Just for reference, even if you were to redevelop just the Walmart and its associated parking, that would be roughly equivalent to two St. Paul city blocks, or about 10 acres. That by itself is a huge site.

Any guess as to who gets the site? A return of Walmart? Another Target? Hy-Vee goes urban? Aldi? Golden Dragon?

by Vagueperson
Trista said she's working on it. It looks to me like a good site for industry. It's really not a visible location for retail.

by Rube Dali
Interesting story from the Star Tribune today on the spate of closures recently(May be paywalled for some):