The Most Livable City in America™
Post Reply
135 posts

The riverfront looks less connected in this rendering than in the previous one. The four towers create a massive wall that screens the rest of downtown from the river. The design of the towers is undoubtedly still preliminary and tentative, but it is uninspired at this point. A few odd angles cut into banded glass boxes - the designs show little eveidence of any contextual references. The big sloping ramps of the land bridge will be fun for skateboarders, but misery for pedestrians for at least four or five months of each year. The towers appear to be disembodied from both the city and the river. Not a very exciting use of an admittedly difficult site.

So the land bridge has big gaping holes in it where you can peer down onto Shepard road? That is not what I was expecting. 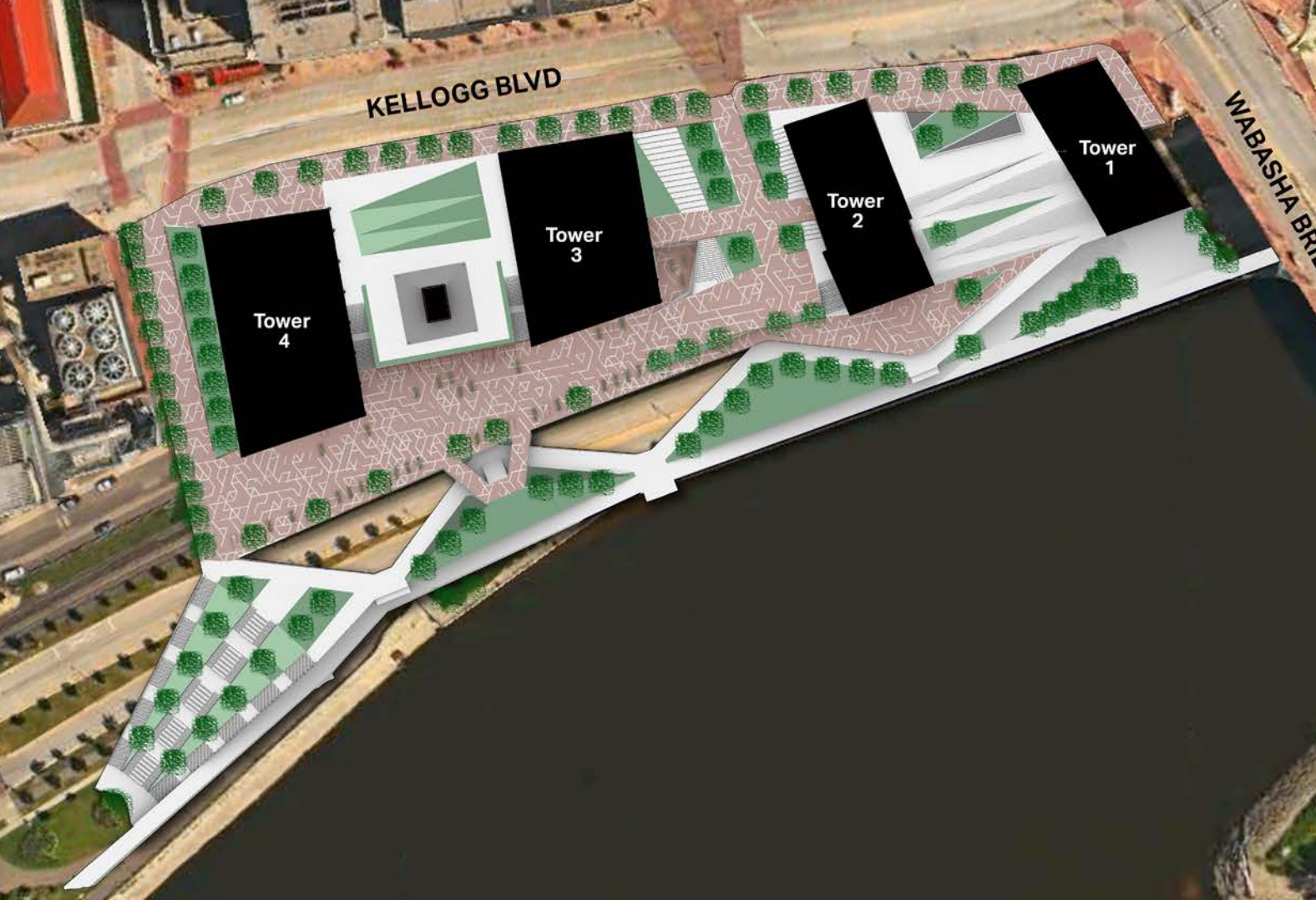 However, if it becomes easy to ride your bike down to the river without having to cross live traffic on Shepard I think it will be heavily used and few people would ever cross at Sibley again. What would be the point of traveling a few extra blocks on a skinny trail just to have to wait for a short break in lethal traffic?

Also, in comparing this to Kellogg Mall Park, there would be riverfront space that would not be separated from people by 6 lanes of traffic. But this rendering makes it very unclear what is pedestrian space vs car space. The rendering Ethan posted shows cars between the buildings and the river. Is it like a giant woonerf?

Vagueperson wrote: So the land bridge has big gaping holes in it where you can peer down onto Shepard road? That is not what I was expecting.

Like at the plaza in front of Target Field, there are limitations in how long a "tunnel" can be before you have to start providing expensive safety and ventilation systems. Not surprising that they'd break up the crossings to avoid triggering those requirements.

Reminds me a bit of the freeway cap in Duluth.

I wonder if they can install some sort of permeable screen or cloth to hide Shepard Road, but still keep it "open"

The next two phases would include additional public “shelf” space, and an office tower each. Both the later phases could be optional. If completed, AECOM claimed the 10-acre project would contribute an annual $13.5 million to $16.3 million in taxes.

This kind of tax revenue seems like a good return on investment of $75M public money ($80M asked minus $5M for affordable housing "elsewhere"). However, when they put it in phases as described I'm heavily skeptical that anything beyond phase 1 would be built.

The bright side to me being that the first phase includes walking and biking connections to the river:

The plan is to build the riverfront project in phases, with the first covering the smallest towers. Those would house 56 condos, 350 apartments, and a 168-room hotel, along with 500 parking spaces beneath them. Ramps for bicyclists and pedestrians would stretch from the edge of the lid down to the river.

This point about the size of Class A commercial space in downtown has been discussed for years, and it seems everyone agrees, but it's not part of phase 1:

As for “Class A” space, AECOM principal Brian Dusek acknowledged that yes, there already is vacancy downtown. But it’s the wrong kind of vacancy, Dusek said — not the kind that would attract new Fortune 500 companies.

Side comment, but I've always wondered why the railroad wasn't relocated under Kellogg during that giant 1940s-1950s project that defined the riverfront the way it is now... when most of the buildings south of Kellogg were demolished, Kellogg was widened onto what is essentially a viaduct, Kellogg Mall was built, and the southern segment of Exchange Street was brought into the middle of Kellogg. It would have been such an opportune time to curve the railroad slightly in around the post office, underneath Kellog Mall, and then underneath the viaduct that is the eastbound lanes of Kellogg. Similar to the BNSF tunnel in Seattle. https://en.wikipedia.org/wiki/Great_Northern_Tunnel
1923: http://geo.lib.umn.edu/aerial_photos/stpaul1923/5-4.jpg
1957: http://geo.lib.umn.edu/ramsey_county/y1957/WO-9T-67.jpg

Kellogg Mall/Boulevard was built in the 1930s (completed 1936) based on plans dating back a couple decades prior. The amount of Kellogg that is viaduct varies pretty substantially, and even a lot of what is viaduct is built onto the carved-away bluff such that it doesn't actually reach the level where rail runs. You would have needed to blast out a substantially larger part of the bluff to make it work, and... well, in 1932, why would you want to?

Fair enough. But even today, after seeing the giant concrete wall where the jail and West once stood, it seems like they could shift the rail quite a bit north from its current location between the old P.O./Customs House and Ontario St. Alongside some rethinking of Shepard Road in this stretch, it could significantly open up *the actual riverfront* in conjunction with this project, since the area through Wabasha and Robert is a gross choke point for trail users and the riverfront in general.

would that require impossible railroad cooperation?

Vagueperson wrote: ↑
July 19th, 2019, 6:08 am
So the land bridge has big gaping holes in it where you can peer down onto Shepard road? That is not what I was expecting.

However, if it becomes easy to ride your bike down to the river without having to cross live traffic on Shepard I think it will be heavily used and few people would ever cross at Sibley again. What would be the point of traveling a few extra blocks on a skinny trail just to have to wait for a short break in lethal traffic?

I'm really liking the pedestrian bridge. Only I really would love to see it extended to the Science Museum of Minnesota. Build a section in front of the Utility building and allow retail vendors (like food trucks but without the heavy trucks) and charge them rent space to help recoup the costs long term for the added section.

I went to a meeting about the River Balcony project when it was first announced and I remember someone saying the heating planted didn't want pedestrians walking along to back side of their building for liability reasons. I would assuming that would also apply here but I would guess they can build it far enough away from the build that it shouldn't be a big concern