Demolition of the building is still a few days away. I wandered past over lunch and saw that there are Jersey barriers blocking the sidewalk on Broadway Street and a little onto 4th, but no other obvious signs of the work to come. Notices have been posted at the parking lot north of 5th Street that it "will close on July 31st (or shortly thereafter)".

I counted the cars in the parking lot, which seemed about one-third full, and came up with 92 vehicles (plus or minus a few, partly since a piece of the lot extends farther north and was harder to see as I walked along 5th).
Mike Hicks
https://hizeph400.blogspot.com/

Demo starts today at 1:00 on the exterior of the Gillette Building.

Interview with Chris Coleman from KSTP this morning http://kstp.com/article/stories/S3096646.shtml?cat=1


The St. Paul Saints have agreed to contribute an additional $1 million toward construction of a 7,000-seat regional ballpark in Lowertown, trimming but nowhere near closing the city's projected $8.8 million budget gap.

Looks like there hasn't been any more demolition of the main structure aside from that ceremonial "first bite" photo-op at the entryway -- Or at least nothing else is visible from Broadway Street. It's a big building, though, and it might make sense to start from the other end and chomp their way toward the residential buildings rather than exposing them to all that activity right from the start.
Mike Hicks
https://hizeph400.blogspot.com/

Looks like the Saints are getting the extra $9 million dollars they needed.

I went by today, and the parking lot on the north part of the site was empty. It still appeared to be accessible, but there are fence-topped jersey barriers on the west side of the parking area at least one "Construction Area: Keep Out" sign. 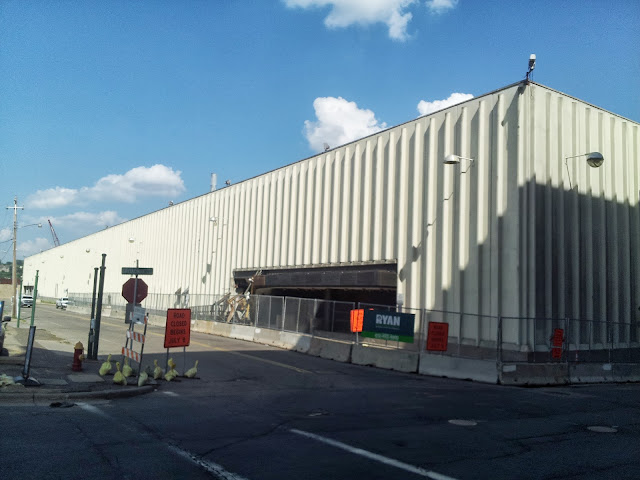 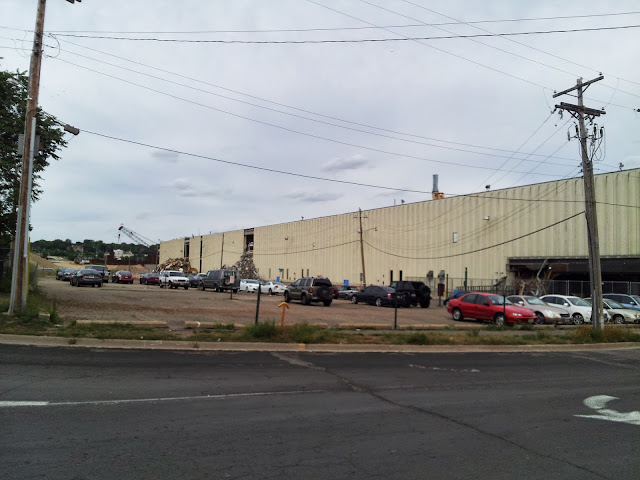 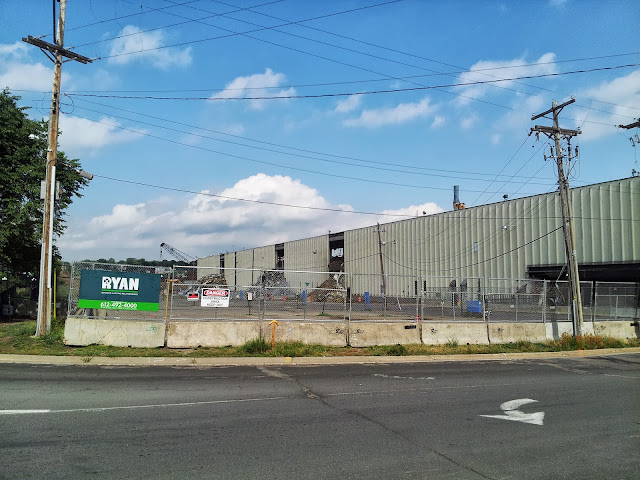 The building almost looks like it is vomiting out the debris! haha Thanks for the pictures mulad!!

From today (August 14th) -- Looks like a little over half of the roof and north wall is down. 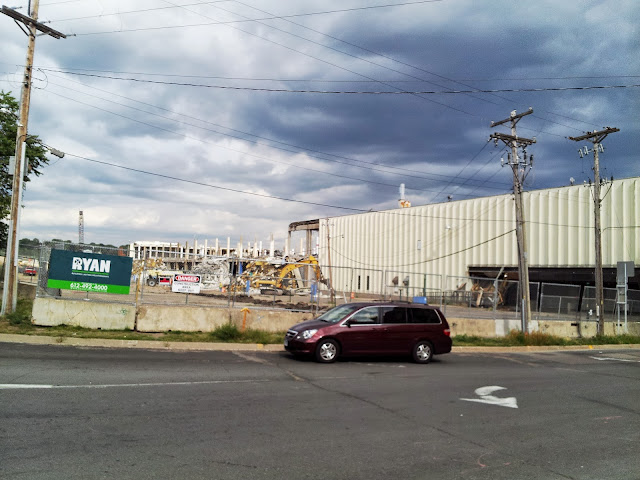 Unrelated but I read the twins are exploring making the saints an affiliate. Which means they wouldn't play in the northern league.

Hard to imagine what league the Saints would play in it if wasn't the Northern. The closest minor league team is either Appleton, Beloit or Des Moines. That would put St. Paul on periphery of any league. Since they travel via bus, I would see that being grueling and expensive.

Yeah they mentioned that increases travel would be required if the saints ever became part of the twins farm system.

I believe this was discussed in hypotheticals before, and the conclusion was that it was largely infeasible. The only minor league that really makes sense is the Midwest League (of which the Cedar Rapids Kernels, the current Twins Low-A affiliate, are a member). I'm not really sure how that would work - the league has two 8-team divisions, so they'd either have to kick out an existing team or bring in another expansion team with them (maybe another Northern League team).

It would be cool, but the logistics would be very difficult. Minor league teams are usually owned independently of the major league clubs, and have their own finances to think about. Losing St. Paul could also put the Northern League on shaky financial ground, as well.

Just discovered there's a webcam on the ballpark's website. I believe the camera is on OMF roof looking NW. There was a partial collapse of the remaining structure today that killed one worker. I haven't looked at many news reports on that yet, though I'm concerned some folks may misinterpret the demolition scene as something much worse than it is. A photo I saw used in an early Strib report seemed to be from a MnDOT camera still from almost a month ago, since it showed much of the building still as 2 stories (it was a shock for me to discover there was a second level because of the blank exterior walls). However, the ground does slope quite a bit, and the accident appears to have occurred at the far end -- was the building actually 3 stories, with one partly underground?

Anyway, some shots to help with context. These first two are from August 28th: 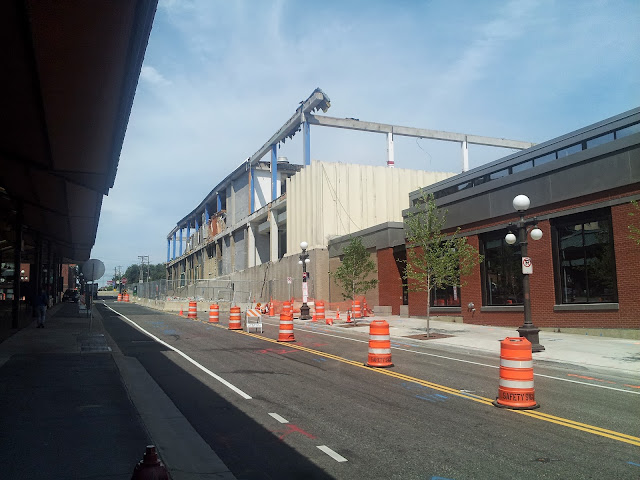 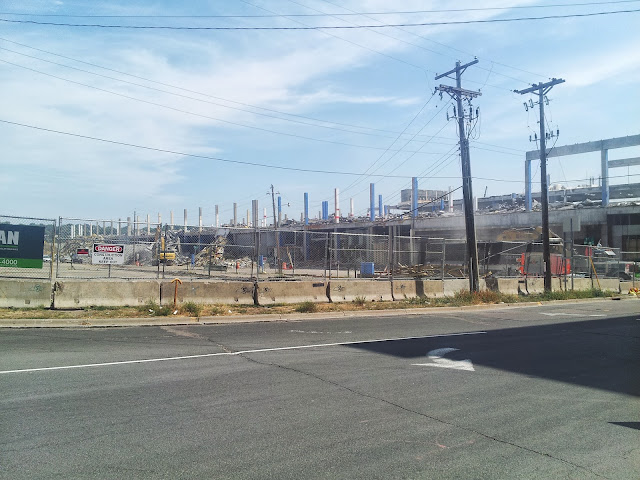 This is from 1 week ago, September 3rd: 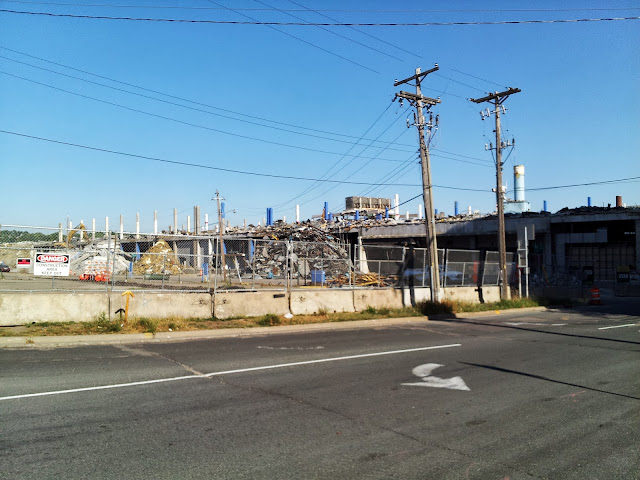 What a tragedy - but we should be thankful that accidents of this kind are as rare as they are around here.

Fabric has been draped over the chain-link fences now, so it's hard to get a good angle on this site from the street now (or at least the angle I liked). Along the north side of the building next to Broadway Street, it looks like only a single level now, though on the south side next to the Green Line OMF, another level undernearth can be observed.

The proposed ballpark design is drawing complaints about not fitting into the surrounding neighborhood:

I can understand wanting the exterior materials to blend well with the brick-heavy surroundings (at least on the Broadway side), but it's a bit silly to complain that it isn't taller or bulkier, or that it's "suburban" (if that's the case, where's the giant parking lot?). It's a stadium, not a normal building. The farmer's market isn't tall or bulky either...

Oh for gods' sake, it's not like it's in the middle of a city, it's in Saint Paul - our biggest suburb.


[/snark]
Snarkiness aside, it sounds to me like the ones complaining didn't really understand what they were signing up for and shouldn't have been surprised by the outcome. This is *not* a major league ballpark of any era, and it sounds to me like they had a small major league ballpark from the 1920s in mind instead of a minor league / amateur ballpark. Tall brick structures would only be appropriate for a much larger stadium, and their "five to eight story" guideline for Lowertown construction would be appropriate only for a seating capacity much higher than 7,000. The Saints would rather get spectators close to the action, which means a narrow, shallow bowl that encompasses the entire infield. I don't have the measurements, but I bet that even the Twins ballpark - at six times the seating capacity - would only be approaching or exceeding eight stories in a few parts of the structure, and then only when measured from the rail trench.

Which, without the snark, now circles back to my original snarky point - I think these guys thought they were getting a major-league facility. They forgot they aren't the primary downtown, and the major league park isn't what they bid for. The facilities the Saints are proposing look perfect for the intended use - about fifty minor-league games and some dozens of amateur games. The ballpark the city envisions would be mostly empty for those uses.
Post Reply
273 posts