The Most Livable City in America™
Post Reply
145 posts

They're adding the top (seventh) floor to the south section now. Much of the interior courtyard and north facing wall now have siding. Also, the recent Pioneer Press article indicated this will have retail after all. 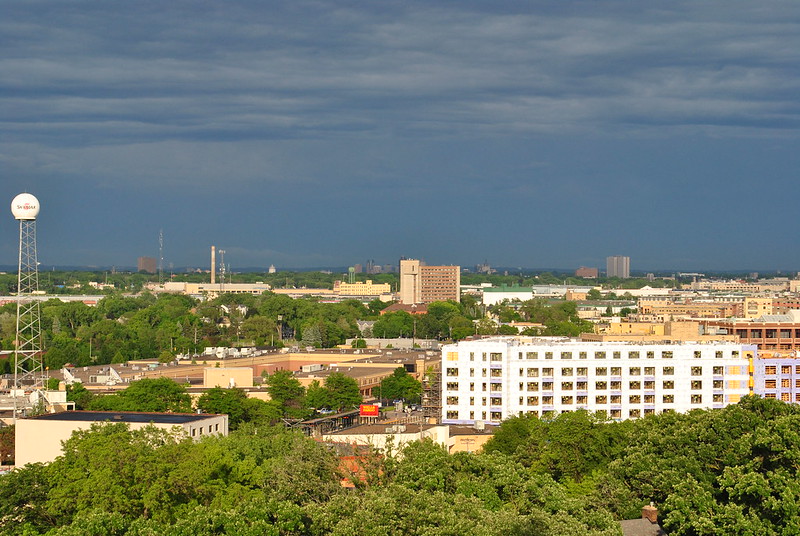 Yea, let's use your pic Grant. Mine came out a little dark.

Great picture, Grant... Such a shame it was photobombed!

Speaking of Wells Fargo, they have a second building (with drive through) and parking lot that has been out of commission for years. Curious if that'll ever be sold/redeveloped.

The whole corner (both buildings, all parking) is one parcel, and is zoned C2. Definitely lots of opportunity there.

Anyone know about the old grocery building behind this and across from Schneider Drug, at Bedford St and Prospect Terrace (just set in from University)?

I believe it's an art gallery or studio, though it'd be much better utilized as something else.

Nothing is wrong with art galleries and studio space.

This project should pinned as worst example of sidewalk closures. It has literally been 15 months that the entire corner was closed.
Q. What, what? A. In da butt.

It was a pretty aggressive detour, too.

Construction vehicles often block the entire width of the street on Emerald too. It's super annoying because you never know if you will be able to get through until after you turn and while there are many ways to drive from University to Franklin, Emerald has the only stop sign at Franklin for a long stretch, making it the safest route to take.

This is all but wrapped up from the outside, and it looks like people have started moving into the front half of the building now. Of note:

• The "St. Paul" sign is now up and lit up at night, although it's covered by a banner. It's a pretty basic, white san-serif sign. But better than nothing, I guess.
• The corner along University and Emerald has signs up for "Coming Soon" with food imagery in the background. But since there's no name of a business that's coming soon, my guess is that they haven't signed anybody yet.
• Overall the street frontage along University is pretty good. It's very lit up and open, even if most of it is lobby and amenity space.
• The street frontage on Ellis, on the other side, is solid too. There are 5-6 two-story street level units covering the garage.
• My one real downfall is a very long, windowless wall along Emerald. It'd have been ideal if they could have put even a couple more street-level units there. At least it looks like there will be some additional landscaping going in, though.

As I was waiting to board the Green Line at Westgate yesterday I notice first floor windows of this building had a "coming soon" with a bunch of cocktails on it. I have no idea if it's going to be a full restaurant or just a bar.

Alas those appear to be generic placeholders. They've been up for a while and have no specific tenant or timeline listed.

I heard from folks living in Metro Lofts that there is some tenant arranged. Something about a former food truck restaurant from Omaha?

Maybe be in very initial stages but it sounds like something is happening.

According to the December Pioneer Press article above:


“We have not finalized a retail tenant, but close to an agreement with a coffee and specialty drink shop out of Tulsa – Topeca coffee,” said Brian Moore, a marketing director with Flaherty and Collins.

I'm guessing this is what they meant by "food truck out of Omaha," right? But based on the Topeca website, it looks like a solid place. I don't believe there is space for a full kitchen here, but I could be wrong about that.
Post Reply
145 posts