Interesting Strib article over the weekend about rezoning in Minnetonka to allow for multiple homes on some 3-acre parcels(!). Surprisingly, neighbors are concerned about what it will do to the "character" of the neighborhood.

This seems familiar, but I can't seem to find any relevant posts about it: Mercy Specialty Center, across Coon Rapids Boulevard from the main Mercy Hospital, planned to be connected by a really long skyway instead of just building on existing surface parking... 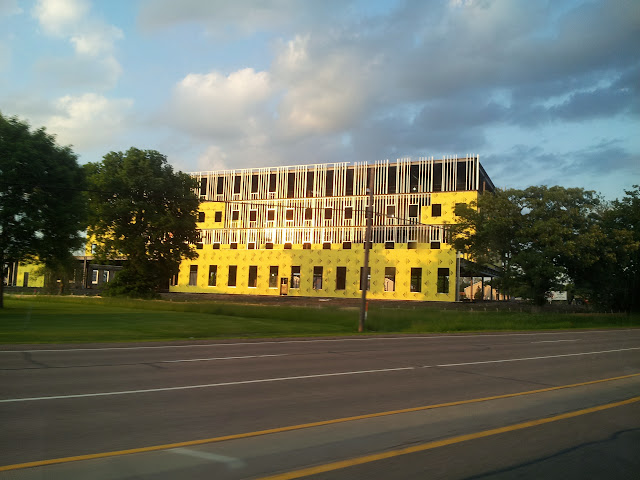 It appears that this is a private medical office development, and not actually owned or operated by the hospital, which may be why it's not being built on hospital land.

I had no idea that Stillwater was annexing the whole of Stillwater Township. I mean, it makes sense, but I just hadn't heard this before and I've mostly stayed abreast of annexations/incorporations around the 7-county metro. I probably hadn't heard it because the arrangement was forged way back in 1996, and won't be complete until 2020. Stillwater Township wanted to delay even further, but the Stillwater City Council wisely said no.

Contrast this to Rogers/Hassan Township, where an agreement was reached in 2003, accelerated in 2008, and annexation was begun on Jan. 1, 2012 and to my knowledge is now complete. Google Maps still shows the old boundaries for some reason, but Hennepin County property records show everything as Rogers now.

Has anyone seen this new "mixed-use" apartment building yet? It's located at 1195 West County Road E, a former Holiday Inn. It was vacant for a number of years, then became a dormitory for the University of Northwestern for 3 years and now is being revamped into an apartment building. The former restaurant that was attached to the hotel on the west side is being turned in stalls for retail stores. Erik's Bike Shop has already moved into one of them.

It's targeted towards college students attending the nearby universities. I must say the location is probably one the of better places in Shoreview or Arden Hills to stick an apartment building. That area could really use some neighborhood-center density.

As mentioned in another thread, this area is heavily trafficked (by car for those who have one, by foot for those who don't) by Bethel students. An improved pedestrian realm (and some relaxation by Bethel on their campus lockdown after dark - come on, these are college kids!) could help this area develop into a nice little neighborhood center for the two nearby colleges. An extension of the Snelling aBRT up to this area would help the severely transit-deprived Bethel campus. I lived for 1.5 years without a car at Bethel, and it was not easy.

Liquor stores backfilling empty big boxes? Seems like the trend may be catching on in the metro.
http://www.bizjournals.com/twincities/n ... store.html

Hahaha, the irony is so thick! Maybe the next big thing will be super-sized pawn shops?

Not sure how to take this. A bit of schadenfreude?

I'm not particularly happy to see poverty rising, wherever it's happening.

Not sure how to take this. A bit of schadenfreude?

I'm not particularly happy to see poverty rising, wherever it's happening.

Not sure why you think I'm happy to see poverty rising, but the correlation between rising poverty in the suburbs along with a resurgence of super-sized liquor stores and pawn shops is very ironic to me, and almost laughably blatant and stereotypical (i.e. exhasperatingly unbelievable). Does that make more sense?

min-chi-cbus wrote: Not sure why you think I'm happy to see poverty rising, but the correlation between rising poverty in the suburbs along with a resurgence of super-sized liquor stores and pawn shops is very ironic to me, and almost laughably blatant and stereotypical (i.e. exhasperatingly unbelievable). Does that make more sense?

Love me some adult chocolate milk.

Yeah, that makes sense. But it's not ironic. It's deliberate. It *is* laughably blatant and stereotypical. And really, really sad.

Total Wine should be interesting. MGM has always been rude to me, and my local friendly liquor store doesn't have much selection, so I'm looking forward to checking it out. I go to that area every now and then for Cost Plus World Market because Wal-Mart (or any other store except Target at Christmas) doesn't carry Tim-Tams.

I used to go Pawn America back when it was a dump before they started building the "superstores" (and a friend of mine used to work there) I quit because the stuff wasn't much cheaper than new and tended to break and there's a lot less selection than eBay.

Sitework is underway for a new market-rate apartment building in Shoreview. Lakeview Terrace will be at the southeast corner of a realigned Owasso Street & Victoria Street, and will be the tallest building in the city with 6 floors. The architect is UrbanWorks.

congrats to Shoreview on getting a new tallest! While it looks pretty suburban I would wager it is because it is in the suburbs

Oh one day mpls will be so lucky to be granted a new tallest. I have feeling it will be announced when the Wild make the playoffs (In late April early May) With that said I am and will forever be half glass full sort of guy. So if I am wrong I will continue to live another day with the understanding BIG things are working behind the curtains so to speak to really make mpls an even more world renowned skyline. cheers*

But the green, “midmarket” concept has skeptics, both at City Hall and in the neighborhood.

After an explosion of luxury home developments in Eden Prairie in the last few years, city leaders want to draw a project unlike anything else there: dense, medium-priced, single-family homes with lots of green, energy-efficient features.

From the early designs, leaders of the affluent southwestern suburb say the project would be one of the first in the region, if not the country, that combines green features with what the city calls “midmarket” homes selling for $240,000 to $360,000.

Others are skeptical that the project is even feasible and fear that the lower-priced homes could reduce the value of more expensive homes nearby.

1.) The quotes from Eden Prairie homeowners in this are A+.

2.) Does anyone else read this and feel like mixing in the Minneapolis program is just click/comment/trollbait? It's not the same thing at all.
Nick Magrino
@nickmagrino
nick.magrino@gmail.com

I think all the quotes can just be replaced with "fuck you got mine" and not change the meaning of the article at all.
Peter Bajurny
peter@bajurny.us
@FISHMANPET
Post Reply
1034 posts