The Sun Sailor story has an updated site plan that depicts less loopity paths in the 16th St park.
"Who rescued whom!"

I could be wrong, but I don't believe we ever had a topic for the existing West End development, only for the two residential projects (so far) and the "SLP - General " thread. I'll leave this here, as it does include information on the project:

It be difficult to, but it certainly is worth culling through the various SLP threads and make a complete West End district thread, much like there is one for Excelsior and Grand, or Southdale ...

I took a pic of the demolition one year ago. 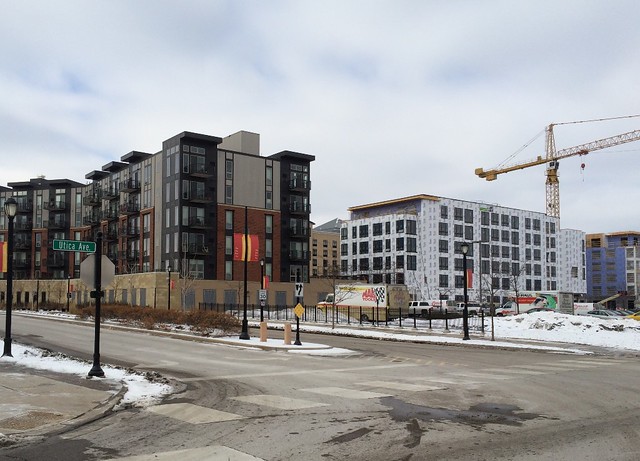 Golden Valley and SLP entering into joint powers arrangement for how to handle the residential buildings that straddle the border.

Anondson wrote:Golden Valley and SLP entering into joint powers arrangement for how to handle the residential buildings that straddle the border.

So people in the same building will have one address, but they'll have two separate cities. This seems a little crazy. A land swap would be much less convoluted.

Yes, you would think that a land swap similar to what St. Louis Park is doing with Hopkins on Excelsior Boulevard for Japs-Olson would make sense at West End for a lot less head aches in the long run.

Right, I so wish there was a border swap for this. I just can't think of where an exchange of equal potential property value down the length of the border could be made.

"Here's a first look at renderings for Central Park West, aka that big empty patch of land at the West End: http://t.co/iODRWKxW2g"

Any word on that joint-powers agreement vs. straight-up border swap?

I really need to get off my ass and email Ann Mavity about that whole situation, though I'm sure it's too late.

Did anyone read through the staff report(s) for Central Park West and see if a border swap was ever discussed? Common sense would dictate that as the most obvious solution, with the convoluted joint-powers agreement as a backup plan. I'm not sure they'd want to do it and upset GV, but I honestly think there is precedent for St. Louis Park to just straight up annex the land (with a willing property owner of course) into their borders.

^I never did send that email to anyone important at SLP. Anyone else hear anything new regarding that joint-powers deal?

Anyways, Excelsior Group (of 222 Hennepin, Flats at West End fame) is teaming up with DLC on the Central Park West project: http://finance-commerce.com/2015/04/exc ... velopment/

Golden Valley isn't interested in a Joint-Powers agreement. See pages 68 and 69 of the SLP City Council agenda for tonight (which includes this as minutes to be approved from the 4/6/15 Council Meeting: http://www.stlouispark.org/webfiles/fil ... 4_20cm.pdf

That throws a wrench in things. SMH.

I suppose this means the architects have to be really creative now?

Hopefully SLP will just proceed with an unfriendly annexation if GV won't play ball. What the heck does GV think could possibly be built on the narrow parcels on their side of the border ?

^I'm unfamiliar with the law. Can you just annex land from another city? That seems...kinda shady, even if it would totally make sense.

I believe the landowner can petition for annexation at any time. In this case it would be "unfriendly", as GV likely would not support it since they would lose out on the future property tax revenue. Unless SLP can come up with a somewhat equivalent piece of land to transfer to GV (with support of that landowner of course), in which case they can do a border swap.

It's hard to find solid information on Minnesota annexation law, since it is primarily focused on township-to-city transfers. City-to-city is incredibly rare (though as discussed in another thread, Hopkins and SLP are about to do a border swap on some land on the other end of SLP). We're talking about 6 acres of land here, which is pretty small. I think SLP has a very strong case to simply annex the land. Is it even served by GV utilities (water, etc.)?

Looks like Excelsior Group will simply buy the office sites from DLC once they've completed the transaction with Duke: http://www.bizjournals.com/twincities/b ... fices.html

Although the land is a tiny sliver, one cannot deny it is a strategic foot in the door for GV regarding further development of/around the West End. There was an article not too long ago about how the growth of the West End has had a positive impact on GV, with the spillover effect resulting in the Arcata and other proposed developments north of 394. In addition, local property values have risen due to the proximity of homes to the amenities offered by the West End. Their stubbornness on this particular parcel is because GV is in a unique position to benefit from the continued development of the West End, so long as they can stay relevant during the planning process. Also, SLP has a place in regional consciousness as being home of the West End; I think they're hoping to associate themselves with it as well, so when someone hears "West End" they think of Golden Valley in addition to St. Louis Park.

Using Lake Elmo as a basis, ,land owners can petition to themselves to be put into another city. It is why Maplewood and Woodbury have narrow slivers on the opposite side of the freeways they border. Lake Elmo would not rezone, so they petitioned those cities to annex the land so they could develop the land that they owned into retail development. Lake Elmo really screwed themselves on that one.

I think you mean Oakdale instead of Maplewood, but yes that is a great example. The land where Oakdale Village (Best Buy, Sports Authority, BWW, etc.) was built at the NW corner of I-94 & Radio Dr was originally in Lake Elmo. I'm not sure if Lake Elmo actually "got" anything for letting the property be annexed into Oakdale though. They were so staunchly anti-development, even along I-94, that they may have been willing to simply let it go. In that case, both entities were incorporated municipalities too (rather than one being a township), so that is a good example for this case with SLP/GV.

Much more recently, a property owner successfully "de-annexed" his land from Lake Elmo and transferred to Stillwater Township - a rare example of going from a municipality to a township...because Lake Elmo wouldn't let him develop his property how he wanted: http://www.twincities.com/news/ci_19684979 The property owner won, Lake Elmo lost, and the MN Supreme Court declined to hear the case.

Does anyone actually live in SLP and care to reach out to someone there to see why they aren't (yet?) pursuing outright annexation?

Not sure how to read your last line. But I think it is the property owner that must ask for annexation and not the city entity. I could be wrong about that as I rarely deal with such issues.
Post Reply
190 posts