Hennepin Co. may raze and sell land on York Ave. and 70th in Edina where Southdale library and satellite county court is today, according to Strib. http://www.startribune.com/local/south/288344641.html

Anybody have photos of the building or know any background on the issue or familiar with the county plan?

Apparently when my uncle was a little kid in the 60s, they would go over there and move the survey stakes when survey and excavation was just beginning.

They should relocate to Southdale, at the entrance by the transit station. Many open spots, plus the now vacant basement space that once was Marshalls.

There's so much dead space at the corner of York & 70th, it seems they could come up with enough land to sell to a housing developer AND maintain the existing building. The sale of the corner lot would help finance improvements to the library and service center. It's a win-win. Unless the building(s) are truly obsolete, which I really doubt, they should probably begin with a plan for renovation, not replacement.

Hypothetically, you could develop the entire frontage along York, including underground parking to make up for the loss of surface parking. There could be housing, offices, and/or retail added, creating a pretty nicely developed block for Edina, preserving the public uses as they are today (funding improvements with the land sales, of course).


2nd thoughts, now that I read the part about Southdale: that is really intriguing. Even after Dave & Busters moves in, there will still be more space on Southdale's awkward 3rd floor, which I've always thought was better suited to a charter school or office use (including government, I guess). The basement space too is largely empty.

I dislike the Southdale library, the multi-floor layout, the cramped and poorly kept children's section. The focus feature of the kids storytime area is a TV screen?? Trying to conduct business in the service center, and had a long, cramped line at the ticket/security counter, leading to a small, cramped service waiting room. Did I mention it was cramped? 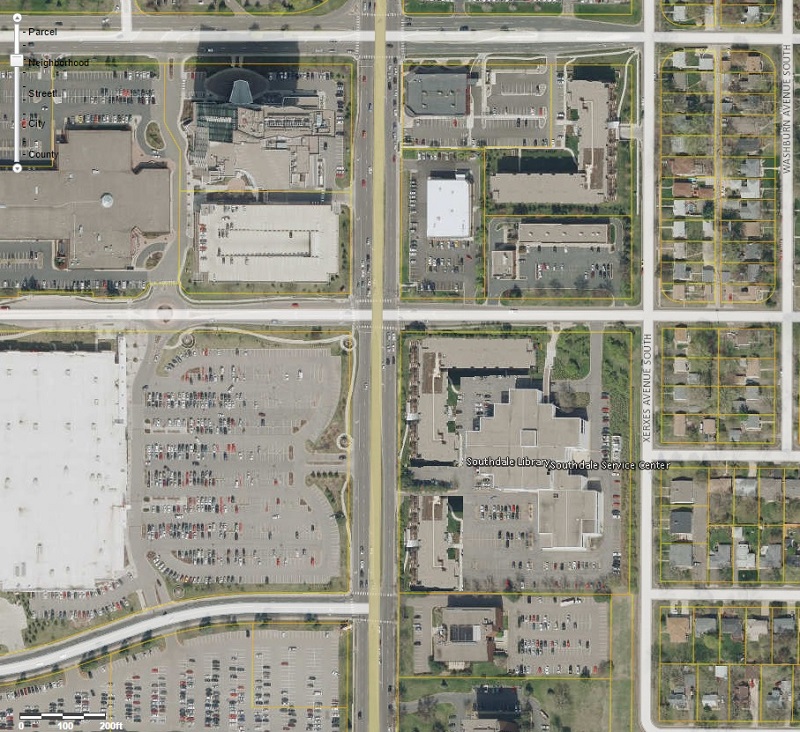 As you can see, the entire York Place apartments can fit on the NW corner of the lot, keeping the entire existing complex in place. There's room for even more on other corners of the lot.

I would not want to see it move to Southdale Center. As it stands today, this is located right on the border with Richfield. Both Edina and Richfield have another library (Edina branch and Augsburg Park branch), but this serves western Richfield and southern Edina pretty equitably. And as we've recently seen (MOA), there is a cost to depending on quasi-public space. Having a critical resource (court rooms!) only accessible by going through privately owned land seems deeply troubling to me.

That said, however, I'd love to see the building razed and replaced on that site. Although the entrance from 70th isn't too bad, the York frontage is atrocious and a total waste of space.

Twincitizen's point about just using the western half of the lot is interesting. But is it valuable to keep visible frontage on York?

By ideal layout would be a wide (east-west) rectangle along 70th, hugging the corner of York and Xerxes, with service stuff on the south edge. This would allow for good access from the SFH residential neighborhoods to the east, plus keep visibility from York and the Southdale District.

fehler wrote:I dislike the Southdale library, the multi-floor layout, the cramped and poorly kept children's section. The focus feature of the kids storytime area is a TV screen?? Trying to conduct business in the service center, and had a long, cramped line at the ticket/security counter, leading to a small, cramped service waiting room. Did I mention it was cramped?

Amen. I used this library extensively growing up and it was always terrible. It must be absolutely awful for a physically challenged person. It hasn't worked since the early '80s and I doubt it worked at any time before that.

An alternative Southdale spot could be the northeast corner lot at York and 66th. Mostly ever unfilled even at Black Friday.

Another copy/paste vision for the site. I used the Northwest Family Service Center as something that might be a similar shape/footprint) future library and service center (3 floors). 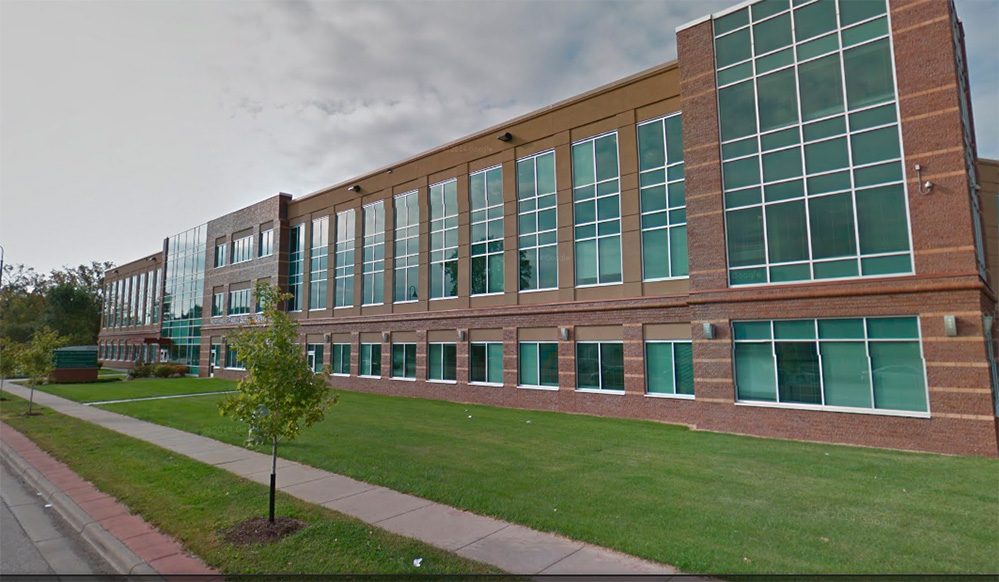 To be generous, I added on another 40% to fill out the 70th St frontage. 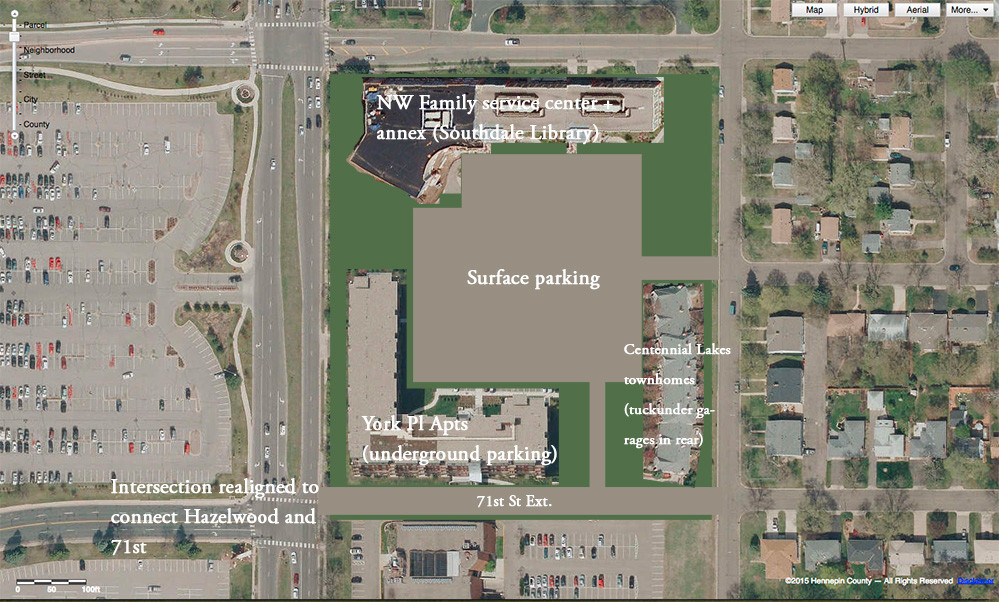 You can still fit a long row of the Centennial Lakes townhomes and the entire York Place Apartments on the same site, plus plenty of surface parking and a new public street (Hazelton/72nd... sorry, mislabeled as Hazelwood).

It's a cool building though! It seems to me that it wasn't that long ago that they added on and remodeled...It is certainly a unique design.

I think we missed the previous update in this thread, which stated the license/service center would move to Southdale.

It is now official that the satellite courts will be moving to the Bloomington municipal campus, leaving the library as the sole piece that would need to be rebuilt on this site: http://www.startribune.com/hennepin-cou ... 321103271/

The focus feature of the kids storytime area is a TV screen??

hnoor0055 wrote:The focus feature of the kids storytime area is a TV screen??

That is what happens when Millenials have kids.

I know people that have iPads for their 3 year olds, so honestly I think a TV in the kids area seems rather tame. Sad, but not surprising.

Based on the shared interest in the site and the eventual need for rezoning, a preliminary planning exercise is warranted before any proposals for development are received. The Edina Housing & Redevelopment Authority (HRA) is leading the process, supervising three consultants. HRA will lead the public engagement process and prepare preliminary site concepts. Maxfield Research will conduct a preliminary market analysis. Braun Intertec will conduct a preliminary environmental assessment. Hennepin County will reimburse the HRA for staff and consultant time.

Public input from the community meetings in December will be used to shape a request for proposals that will eventually be issued to the real estate development community. Neuendorf said that formal proposals will most likely be collected in the spring and forwarded to the Hennepin County Board of Commissioners to make a final selection in summer 2017.

I got a peek at the public engagement outline a few weeks ago, and some of the bullet points were interesting. While Edina controls the zoning and ultimately makes the legal land use decisions in terms of the scale/density of the private development, Hennepin County will retain sole authority over selecting the development team, as the county owns the land. So the Edina City Council and Hennepin County board will have to be mostly on the same page for this to move ahead smoothly. Richfield does not have a legal role in the process, but two Richfield residents would serve on the task force, in addition to Edina residents and city/county staff and elected officials. Construction of the new library building is planned for 2020. 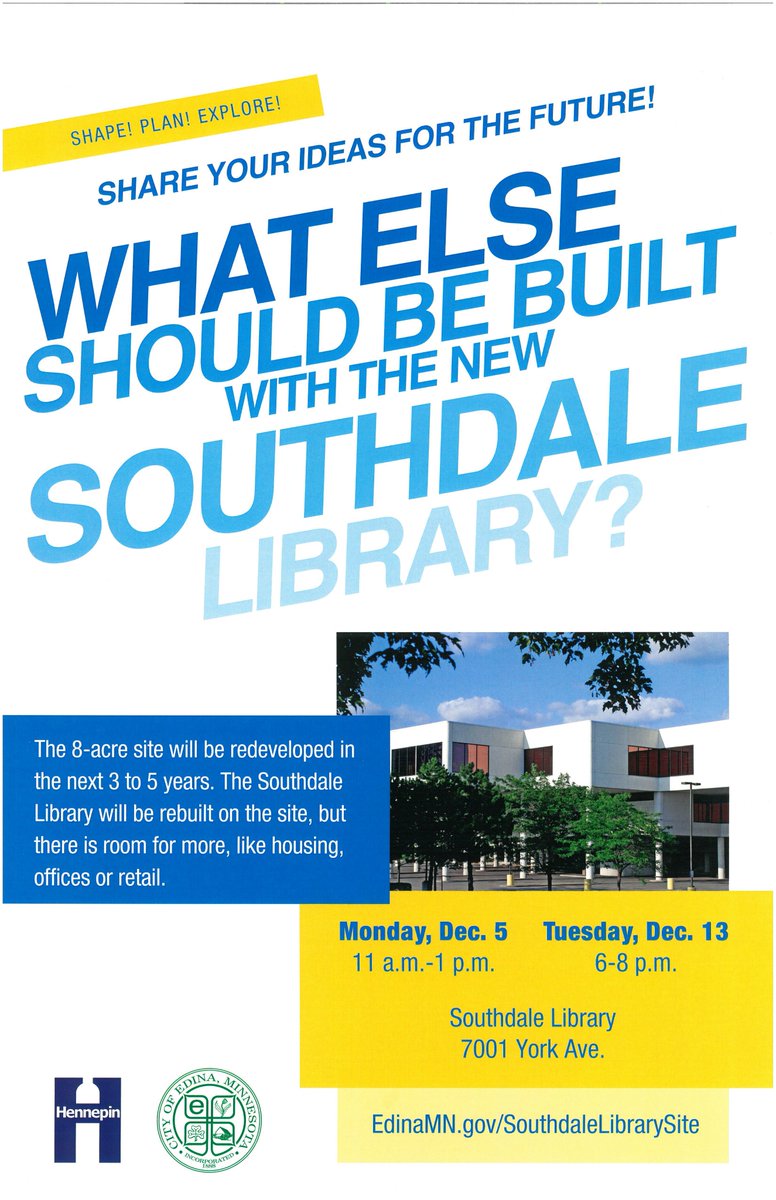 My guess is that we're going to see proposals that are pretty heavy on the housing component, as the area already has an overwhelming amount of retail space. Recent developments have only added more (71 France / Byerly's has a bunch of empty space, as does the nearby Onyx project). I don't think adding a large retail component would be wise, and would almost certainly mean more surface parking on the site, compared to housing or office uses. That's not to say there shouldn't be some retail, even if just a coffee shop attached to the library. This is a regional branch with pretty extensive hours as far as libraries go, so having a Dunn Bros (like downtown & Roseville libraries) might work out.

Could there be office space here? Maybe, but it seems unlikely as there is already so much in the area. Heck, office space is being eliminated in favor of more housing at 66th & York. So back to the housing - my guess is that we'll see a luxury rental building, a senior building, each likely including 20% affordable components. It would be cool to see some rowhomes along the Xerxes frontage, though there is precedent for a 4-story apartment building (York Plaza). Putting a lower-scale housing type along Xerxes would allow for better frontage, as it wouldn't have to be set back as far as an apartment building (see Onyx). Lower-scale development along Xerxes would also help in winning the support of Commissioner-elect (and soon-to-be-former Mayor of Richfield) Debbie Goettel. There's plenty of room on the site for all sorts of building types, and there's certainly no shortage of comparables in the surrounding area. Market rate, senior, afforable, mid-rise, etc. You don't have to go more than 2 blocks from this site to find every housing type imaginable.

Would it be too much to hope for a multistory library? I'm suspicious it will end up single story, spread out, since there will be room.

Edina might want to consider putting in on street parking on the single block of W70th along the Library block. It could help keep parking for the library a little lower. Heck, put in a traffic circle at Xerxes and 70th, it's a pretty ignored stop sign, but design it for low speed driving, not the fetish of high speed traffic circles.

Hennepin County Library has invited participants from Edina, Richfield, Bloomington, and SW Minneapolis to offer feedback on the plans for the Southdale Library block.