The Cannonball in Cannon Falls is history with that intersection closed.

The Underside of Lafayette Bridge
You do not have the required permissions to view the files attached to this post.

Just drove 52 from south of the MN border up to the cities yesterday afternoon. I was shocked at how much traffic there was for a Sunday. I suppose I should go through and look at MNDOT's counts, but it seemed to have much more traffic than I've ever seen on I-90 or I-80. Honestly, the traffic volumes seemed higher than 90/94 north of the Dells. Several times I saw cars make some pretty unsafe on/offs at grade crossings. Does MNDOT have a compiled list of all planned/scheduled improvements somewhere?

DaPerpKazoo wrote:Just drove 52 from south of the MN border up to the cities yesterday afternoon. I was shocked at how much traffic there was for a Sunday. I suppose I should go through and look at MNDOT's counts, but it seemed to have much more traffic than I've ever seen on I-90 or I-80. Honestly, the traffic volumes seemed higher than 90/94 north of the Dells. Several times I saw cars make some pretty unsafe on/offs at grade crossings. Does MNDOT have a compiled list of all planned/scheduled improvements somewhere?


Were you down in Decorah by chance?

I was. Left Minneapolis early Saturday morning and spent most of the day Saturday near Durand, WI. Left Durand for Decorah just as it started to rain late Saturday afternoon. Came back to Minneapolis Sunday afternoon. MN 43 from Winona to Mabel was one of the prettiest drives I've ever done.

DaPerpKazoo wrote:I was. Left Minneapolis early Saturday morning and spent most of the day Saturday near Durand, WI. Left Durand for Decorah just as it started to rain late Saturday afternoon. Came back to Minneapolis Sunday afternoon. MN 43 from Winona to Mabel was one of the prettiest drives I've ever done.

Nice. Went to college at Luther. The drive from Decorah to Rochester is one of the prettiest drives in the state. Lots of hills and winding road.

As long as we're on a transportation geek forum, I'll mention that I love Amish country because the horse & carriage is the most elegant form of transportation next to the canoe.

EDIT: Are horse-drawn carriages allowed to travel on US 52?
"Who rescued whom!"

Yep. I drive to Decorah a lot and I always see carriages driving along the highway.

When I was a kid myself and my friends would ride our bikes along 52 from Zumbrota to Pine Island. For one thing Pine Island had a community pool at the time and Zumbrota didn't and we'd stop at my grandpa's bakery for a treat on the way home. Good times. Of course now a days no way could a bunch of 10 and 12yo's ride their bikes alone 52 for numerous reasons and as an ex 911 staffer I couldn't imagine the number of calls from "concerned" citizens there would be.

Well now I feel old, because I lived in Zumbrota from 1993 to 1998 and there was definitely a pool then
Peter Bajurny
peter@bajurny.us
@FISHMANPET

The pool got built around 1972. I was in 7th grade then. It sure seems so much smaller now when I go by it.

Oh and the new stoplights (!!!) for the $34.3 million Diverging Diamond Interchange to Nowhere have been installed within the last few days. It will be a sight to see such an over-engineered interchange serving cornfields.

They're starting to paint the northbound span of the bridge, though it doesn't look like any of the bridge over the river has been constructed yet. The support pylons are being painted tan, while the old bridge's supports were never painted (or at least appear that way). They're also moving along fairly quickly with construction above the Green Line's yard area at the Lowertown OMF. 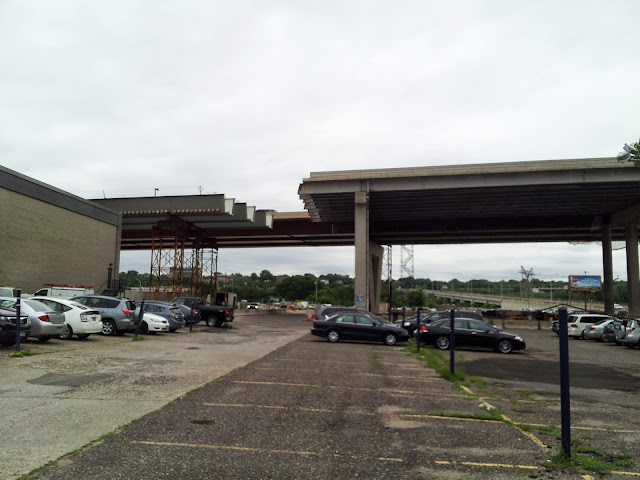 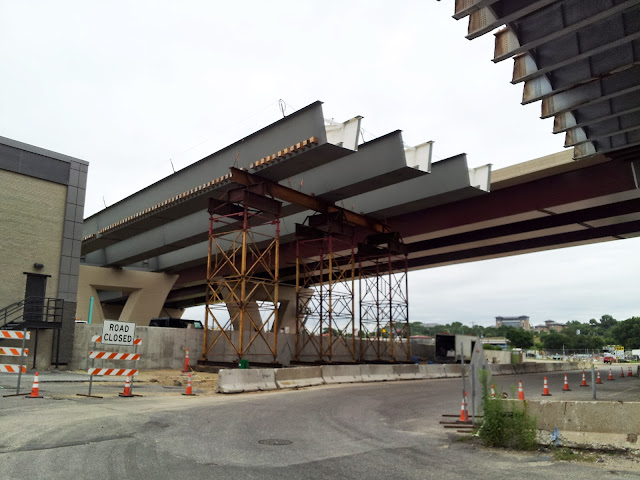 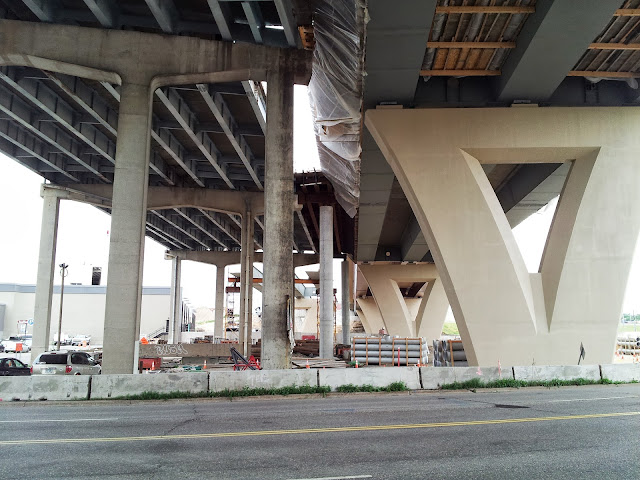 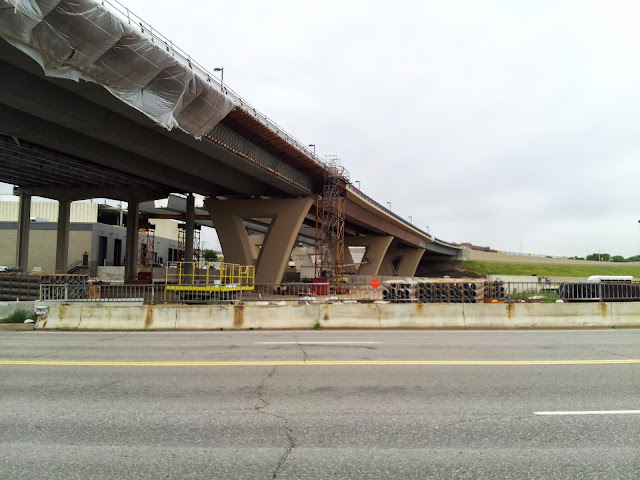 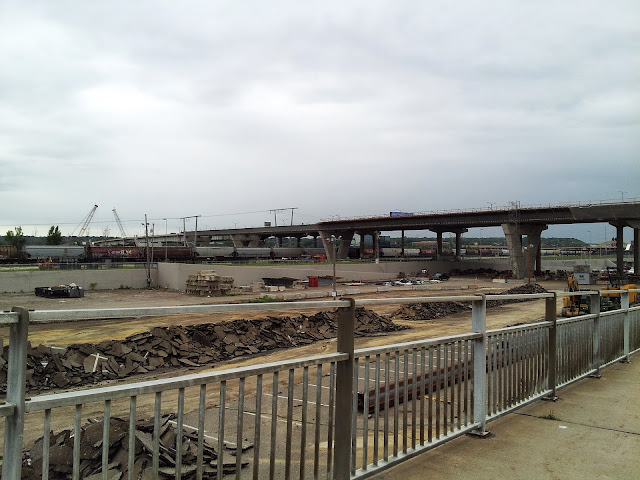 Work progresses on the Elk Run and 65th Street interchanges which won't enhance mobility or safety but are instead planned to subsidize, respectively, phantom bio-business development and a Menards.

Meanwhile, Highway 52 continues to be deadly at actual intersections with actual traffic.
http://www.postbulletin.com/news/local/ ... b55a2.html
This is Dakota County 86, a relatively important east-west connection between Cannon Falls and New Prague that crosses 52 with a stop sign.

The plan is to convert this intersection to a Reduced Conflict Intersection in 2014... http://www.dot.state.mn.us/metro/projec ... annonfalls
This was scheduled for 2013, along with another one or two county road crossings, but it got pushed back. Of course the long term vision is an access-controlled freeway between St. Paul and Rochester, which precludes a RCI.

Yeah, that is a nasty intersection. Looking at that area, I feel like it should just be closed in favor of new ramps at County 17 (where there's already a bridge) and improvements to Harry Ave, though this would increase car traffic across the Progressive Rail spur and potentially complicate its eventual grade-separation at U.S. 52.
Mike Hicks
https://hizeph400.blogspot.com/

Part of the Elk Run interchange has opened, mostly the stuff on the eastern side by Oronoco.

This is only slightly related to this project, but I thought it was interesting. It looks like a few Highway signs were salvaged from the Lafayette Bridge project and turned into a table tennis table for people to use on the plaza at 13th and Nicollet Mall. I believe the base is made out of railroad ties. Wasn't sure if I should post this here, or in the Roadgeek Topics thread...
My flickr photos.

I went through what I could of the Elk Run project area over the weekend, and there's still a long way to go before all of the roads are complete. I think the road surfaces for the main interchange are done, but the traffic signals weren't done yet -- probably explaining why it isn't fully open. There was an article in the Post Bulletin a few days ago saying that the ramp from northbound US-52 to CR-5/12 was open in order to help with traffic for the Gold Rush festival in Oronoco (not to be confused with Gold Rush Days in Rochester), but it didn't look open to me. Only the north-side ramps to/from US-52 seemed open.

I'm hedging because I didn't actually go north on 52 to get to the interchange -- certainly anyone who came into town that way would have been stuck with a detour up to CR-11 in Pine Island and back as they left, since the entrance to southbound US-52 was definitely closed. I saw a KTTC news van in the area a couple of times when I was looping around doing GPS logging, but haven't figured if they filed a story on the project that day or what they were up to... Yesterday they posted a clip of blasting for the west-side frontage road, though, which required closing the highway for a short while.

I was still surprised by the scale of this project -- on some of my excursions to the ends of roads that had been cut off, I'd come across pretty huge mounds of dirt just there to help with the camber of the road surface. The design speeds are pretty high, even though White Pines Road to Oronoco is only signed at 40 mph. It is worth noting that the area is rolling countryside and river valley, which explains the desire for some of the roads (White Bridge Road has a fairly steep segment, and the new CR-12 bypasses that). I was amused by the roundabout advisory speed of 15 mph, which is lower than the 20 mph suggested for a new roundabout they just added in my hometown of Byron. The Elk Run roundabout is a (mostly) double-lane job too, though if you're in the wrong lane at the wrong time, you might get spit out in a direction you don't expect.
Mike Hicks
https://hizeph400.blogspot.com/

I drove by on my way out of town yesterday (For 10 points what was wrong with the US 52 detour signs). I don't disagree with building an interchange here, since the alternative was building two- one on the north and of Oronoco and one on the south end of Pine Island. But if the vaporware never materializes, I'm wondering if the money couldn't have been better spent at the time being at Cannon Falls. If we built all three overpasses and both sets of ramps at the same time, there might have been economies of scale as opposed to doing three different projects. Then at some point in the future do both the Pine Island North and the Pine Island South / Oronoco North (Elk Run) interchange a the same time.

Mdcastle wrote:I drove by on my way out of town yesterday (For 10 points what was wrong with the US 52 detour signs).

The US 52 detour signs indicated a detour for State Highway 52! Glad I'm not the only one who noticed that oddity.
Post Reply
151 posts