According to this F&C article, the State Patrol has issued 960 tickets since April to drivers who took over-length vehicles (longer than 35 feet) across the bridge. That's when the crossover section between the old and new bridges was created. Sounds like the new northbound bridge will be ready for traffic in February 2014.
Mike Hicks
https://hizeph400.blogspot.com/

http://www.startribune.com/local/stpaul/241961041.html
Is there still the crossover on the bridge? Wonder if the driver didn't see that.

I believe so, though they should be getting close to removing/reconfiguring it. The bridge project website says February 2014, which could mean anytime now.

The guy was going northbound. The northbound side was supposed to close from 9am today until 5 pm tomorrow.

Traffic will shift to the new northbound span of the Lafayette Bridge this Saturday:

I imagine the old bridge will come down pretty quickly.
Mike Hicks
https://hizeph400.blogspot.com/

According to MnDOT's Twitter feed, the new northbound span opened late yesterday. I drove across it on my way into town this evening.

Has anyone heard if the bike/ped trail will open anytime soon (in time for summer)?
Mike Hicks
https://hizeph400.blogspot.com/

Another "popup project" that's been in the works since last year, but I haven't been aware of it. Overpass and "interchange" at Goodhue County 9. The county didn't like the idea of a reduced conflict intersection so they came up with some of their own money and got some grants. For now they're cheaping out by building what's more like right turns as opposed to ramps, but the plan is to upgrade them later as traffic increases. This is a design-build so it is going to go up rapidly and may even be done at the same time later this year as the Cannon Falls interchange. 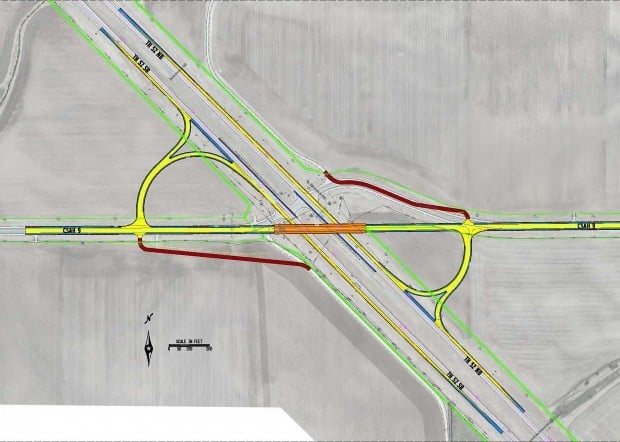 ugh, those loop radii look tighter than the ramps at Dakota 47 and Dakota 46. They can't be Interstate standard, can they?

And this totally misses the opportunity to do a comprehensive solution that includes Goodhue County 1.... which I know was still under study. This is the problem with pop-up projects.

Here's a concept I had a few years ago that would more effectively integrate both CRs 1 and 9 into the interchange, but would require more (farmland) ROW acquisition: https://www.google.com/maps/ms?msid=201 ... 5,0.076647

Well, I guess since US 52 isn't an interstate. And people were criticizing the MN 610 ramps as being too wide...

As a refresher for people about the ambivalent results of some recent pop-up projects:

1) Flyover from I-94 WB to MN 101: Original concept for the interchange was a two lane ramp that forms the mainline of of MN 101. What we got was a 1 lane ramp that enters the mainline from the right.
2) MN 36 through North St. Paul- this was kind of OK, and was one of extremely rare situations where things turn out better for cars and pedestrians, but since they completely closed MN 36 again when they fixed English St. it would have been better to do them both at the same time.
3) County 101 and MN 13: "half" an interchange, the mainline has a left exit and entrance and the significant amount of traffic that wants to go from MN 13 NB to US 169 NB has to weave across the WB "mainline"
4) That new interchange east of Mankato and US 14 and County 12: I'm never opposed to new interchanges and there is a traffic problem on MN 22, but if we were able to use these funds for any statewide transportation project I'd question the wisdom of putting them here at this time. Ditto some of the ones that got that last special pot for economic development like another one at Perham.

Matt: MnDOT and Goodhue County did do a comprehensive study that looked at both County 1 and County 9. The conclusion was for a full interchange at County 9 and to (once the existing intersections are closed) reroute County 1 along 100th Ave. This project that Monte mentioned is the county's attempt at fast-tracking some sort of interchange solution.

And another popup project for 2015, at County 86. The local agencies said "forget it" to Mn/DOTS proposal to build a reduced conflict intersection, so they're building an interchange instead.
http://www.co.dakota.mn.us/Transportati ... ve%20B.PDF

I still think they should have added ramps at 295th Street / County 88 instead. And there isn't much need for ramps to SB-52 / from NB-52.
Mike Hicks
https://hizeph400.blogspot.com/

I've also wondered if, at some point, there would be a realignment of MN-19 and possibly removal of the ramps at the existing MN-19 bridge in Cannon Falls. The bridge and interchange were rebuilt a few years ago, but it's still a folded diamond with substandard geometry (which seems par for the course on US 52 unfortunately). Froggie, haven't you proposed a modification to the MN-19 route?

mulad: County 86 has much more regional connectivity than County 88, in no small part because 86 continues all the way west into Scott County. Makes much more sense to put an interchange at 86 than at 88.

matt: I've never posted a modification, though I sketched one out some years back as a fantasy exercise. In short, the only way there would be a realignment of Highway 19 is if the county extends their planned "southeast boulevard" west to tie into 19 west of town. To my knowledge, neither the county nor MnDOT are proposing such an extension.

I recall reading documents in the very early stages of planning for this project proposing to reroute of MN 19 to tie it into the southern interchange- it would have followed the southeast boulevard, and then went directly west from the interchange to meet up with the current alignment.

That may have been a proposal during the early feasibility studies, but was dropped.

I've also seen a study for access between the 1/9/Hader study and the new Cannon Falls interchange going in... but I cannot find it on the MnDOT site. Anyone know what I'm referring to? It might have been for Goodhue County 14, although I always assumed they would just reconfigure the local road network to eventually eliminate at-grade intersections between the under-construction south Cannon Falls interchange and the popup Goodhue 1/9 interchange.

Edit: Here's an interesting document on the 52 corridor from the Goodhue County website: http://www.co.goodhue.mn.us/departments ... ochure.pdf

It's interesting how we're focused on building interchanges on this corridor, which is great. And there have been access closures at the north and south ends (which is good). But eventually the primary interchanges will be done and we'll need to be a little more aggressive about closing and preventing at-grade access points (we need to be aggressive about this on all rural highways, not just expressways/freeways). But this also creates disruption of access, in rural and urban areas. Back when the Interstates were built, there were probably 2 to 4 bridges without interchanges for every bridge with an interchange. Many of these are gravel country roads, but we still understood the value of connecting land across the freeway corridor. That hasn't happened on 52 over the past decade of projects, except for a few bridges south from Oronoco.

I've also seen a study for access between the 1/9/Hader study and the new Cannon Falls interchange going in... but I cannot find it on the MnDOT site.

Here. (PDFs on the Documents page)

I'm sure to the bean counters the benefit/cost of a bunch of local overpasses isn't 1 or greater (the basic go/no go threshold for highway projects) so even if they're nice for local connectivity they're not going to get built by themselves (even in Cannon Falls Mn/DOT is raising eyebrows at the second bridge on the south end of town, Cannon Falls has a lot bigger ambitions than what they currently are). Only as part of a larger project, like a new freeway on new alignment- there were a couple built on US 14 west of Owatonna.

mattaudio wrote:ugh, those loop radii look tighter than the ramps at Dakota 47 and Dakota 46. They can't be Interstate standard, can they?

I think I figured out why they aren't doing ramps with regular geometry this time around. They would lose a $1.5 million federal grant as part of the funding package.

Here's the original proposal they hammered out about a year ago:

Rochester Post Bulletin wrote:Further helping the county's cause was news delivered by Derrell Turner of the Federal Highway Administration. He said the $1.5 million grant planned for the interim solution at the troublesome intersection was not transferrable to a diamond interchange. However, the quadrant interchange meets the federal definition of a "low-cost safety solution," and could use that money.

This was apparently modified a little bit within a month of the original Kline-sponsored summit to provide higher speed "turns" per mdcastle's image above per the Northfield News.

So the planned interchange is a "quadrant interchange" which is apparently different enough from the folded diamonds (such as we've seen at County 46 or County 47 further north) because this lower-quality geometry is a "low cost safety solution" by providing, according to MnDOT, "a smaller footprint than a traditional folded diamond." But my guess is that a folded diamond with proper ramp geometry would have involved roughly the same amount of pavement, marginally more grading, and maybe another acre or two of corn field condemnation. So the poor design of this project is a workaround to a FHWA rule, but the trade off is that they are chipping in $1.5 million.