A few suggestions for the update:

Midtown Corridor: show both bus on Lake Street and rail in the Greenway. Rail between West Lake Station (Green) and Lake/Midtown (Blue). Midtown Rail will probably be assigned a color, as soon as it is adopted by the Met Council and they decide to use LRVs. I know that the LRVs are capable of displaying "Yellow Line" (I wish I had saved that spy photo...) Bus should be shown all the way to downtown St. Paul, with a thicker line from Uptown to Snelling (aBRT), then a thinner line from Snelling-Selby to Downtown St. Paul (regular 21).

Terminate the Red Line at Mall of America: I'm not sure how we decided to show that line going all the way to downtown, but it's pretty clear that won't be happening within our "2030" framework. The extension beyond Apple Valley Transit Station should probably be shelved as well. That won't be happening by 2030. We could show future extensions in a lighter/less opacity red color.

Change names on many bus lines to reflect aBRT naming scheme and known routes: aBRT plans are now advanced far enough along that we should identify the A-line (Snelling/Route 84), B-line (West 7th/Route 54), C-line (Penn/Route 19), and D-line (Chicago-Fremont/Route 5). Those are likely to stick in that order. Any East 7th aBRT would be an extension of the B-line. That extension will not likely go beyond Maryland & Prosperity/Phalen, via 7th St, Arcade St, Maryland Ave. (Studies looked at going all the way to Maplewood Mall, but that's not going to happen).

I think Lake Street is a good guess for the E-line (Uptown to Snelling). Anyone want to take a stab at the next few? Hennepin, Robert, American Blvd? That's all of them, save for the Nicollet-Central line, which was rated 2nd highest after Lake Street. I think we should show both the streetcar starter segment (Lake Street to Hennepin & 7th), as well as the longer aBRT line outlined in this report.

I going to guess that the greenway portion of the midtown corridor will be designated with a letter along the lines of an arterial corridor, just like the aBRT on Lake. If its all going in as one project and serving the same length I doubt MTC will designate the greenway as part of METRO, even if it is grade-separated. What was the final verdict on the aBRT extension on lake east of Hiawatha?

I'd also guess that if MTC ends up being the one running the Nicollet streetcar they'll also give that the letter designation. IMO Nicollet should become the A line and 7th the B line, but that's way off in the future.

I do think Midtown will eventually be given a color designation and be a part of the "Metro" brand. It is rail, it will likely use LRVs, not streetcars, and it is almost entirely grade separated. While by itself the line may not appear to have regional significance, it connects the Blue & Green lines through some of the most densely populated areas of the metro, and serves important destinations like Uptown, the Midtown hospital district, etc. The only question to me is "yellow or purple"?

Metro Transit running the Nicollet Streetcar is not an "if", it's practically a certainty. I again disagree with you that the streetcar would get a letter designation. I think the streetcar will remain a "starter segment" for quite some time after it's initial construction, and will be mostly unable to replace any bus service in the corridor. While I don't think this is necessarily going to happen, I'd really like to see the full Nicollet-Central corridor get arterial BRT anyways. The arterial BRT corridor was planned to go from 53rd Ave NE in Columbia Heights all the way down to American Blvd in Bloomington. That line scored the highest of all aBRT lines studied. Even with a 3-mile streetcar line in the middle, I think that aBRT line still has immense value. It would probably still score pretty high even with the streetcar stealing a good chunk of its ridership. My point is, no the 3-mile streetcar is not going to be given some arbitrary letter designation. It will probably just be called "the streetcar" or "Nicollet-Central", as our old streetcar lines were called by name rather than route numbers.

How would the grade-separated Greenway line connect to bus services and the highway BRT service at I-35W?
Would the line share platforms the LRT at East/West Lake and Midtown stations?
Twin Cities Transit Map 2030 : Order Prints | Follow Mapping Twin Cities on Tumblr |

Pedestrian connection running on the west side of 35W, ramping up from Greenway level to Lake Street level. 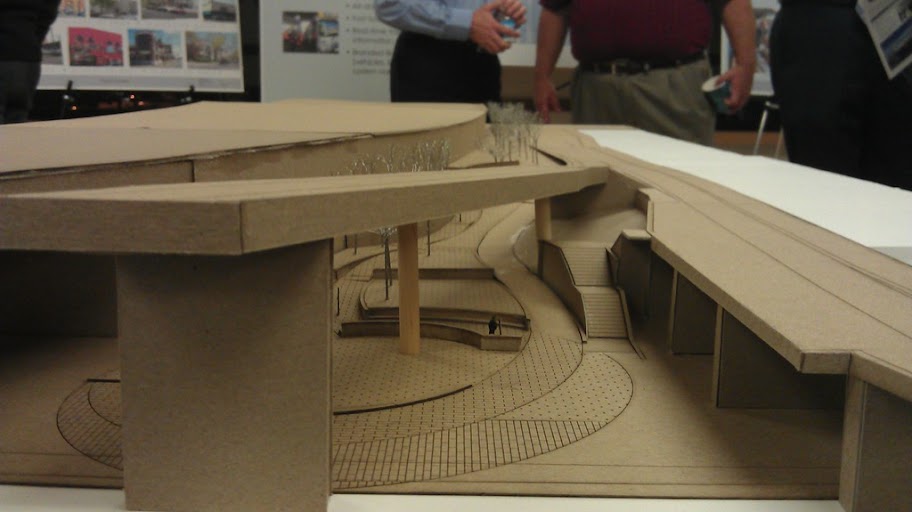 Looking southbound, from the greenway. The ramp in the foreground is the new southbound exit to Lake St.

Working on an update. Now would be a good time to suggest new content. 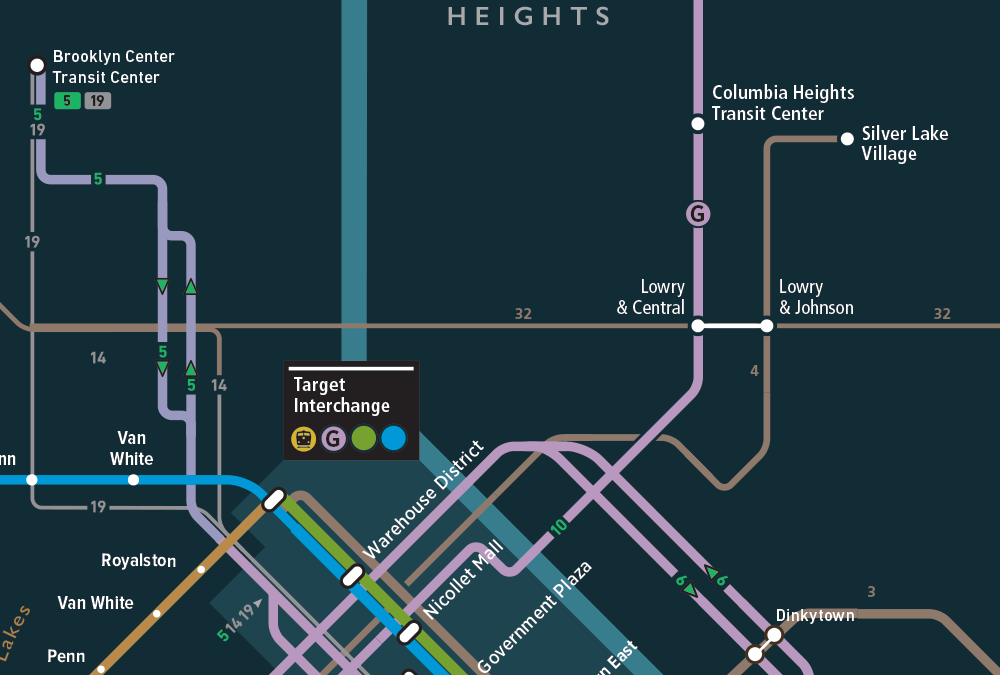 Also, the Midtown line (ehanced bus on Lake + LRT in the greenway) if you don't already have it.

All of the above is planned!
Twin Cities Transit Map 2030 : Order Prints | Follow Mapping Twin Cities on Tumblr |

Since we like building LRT in the suburbs, here's an idea for a branch from Hopkins to Wayzata with possible extension to Mound. https://mapsengine.google.com/map/edit? ... _ouF0z_by8

Your public is still waiting with baited breath for the update of the transit map.

I relocated to California for a wayfinding gig. Will try to update as soon as I've settled in.
Twin Cities Transit Map 2030 : Order Prints | Follow Mapping Twin Cities on Tumblr |

While we're waiting for the holy grail, inspired by this aerial map of Portland's system, I mocked one up real quickly for Minneapolis of the planned Metro lines with the long-term streetcar system. The stops downtown are a bit shaky, since it's hard to see where exactly the streets are, and there are no tentative station locations for the non-Nicollet-Central lines, but it's still interesting to look at.

This new plan in Edina has a light rail in the renderings at Vernon and hwy 100. I'm on mobile now so can't make the map but they could have this go north south up to westend then to target field via cedar lake trail stopping at Penn too for people to transfer. Could stop at excelsior next to bunnys and then south into that industrial park by 494 then into Bloomington.

The light rail on the Dan Patch will have to be in the realm of fantasy because the State legislature had forbid any plans or analysis of passenger rail on this line.

Legislators from Bloomington and Edina were behind that.

Anondson wrote:The light rail on the Dan Patch will have to be in the realm of fantasy because the State legislature had forbid any plans or analysis of passenger rail on this line.

Legislators from Bloomington and Edina were behind that.

Laws can be changed. I actually wouldn't be all that surprised if this was changed in the next 5 years.
Post Reply
373 posts