Feedback for if a button is pressed isn't a new idea. For many decades California had small red an green incandescent lamps in the buttons, it would turn green if the button was pressed. Problem was that this just meant it was pressed, not that the call was acknowleged by the controller, and the lamps were another maintenance item. Cool things like lighted signs and center island lights have gone away because the benefit didn't justify the maintenance. With buttons now required for ADA compliance even with recall enabled the idea that they don't do anything isn't going away.

The trouble with a display until the next walk cycle is none of the current controller hardware can handle that sort of output, and the controller very likely has no idea itself when the next ped phases is going to be, on virtually all actuated systems the green time is a range depending on how many cars show up, not a single number.

On an non-actuated system, you could design LED modules to count down based on the time between when the controller outputs voltage for the Walk lights. This would be inaccurate a couple of times a day when the TOD programming changes. This is how the change interval countdowns work now, all the timing is in the LED module, and it learns how long the change interval is and don't require any additional outputs from the controller. You can even use them with electro-mechanical controllers.

Imagine if car traffic signals learned when to show the yellow for cars and were wrong a couple times per day. That's an interesting workaround for old mechanical technology, but utterly depressing for more modern installations.
Mike Hicks
https://hizeph400.blogspot.com/

From The Guardian: "The UK is quietly replacing roundabouts with traffic lights. The US is doing the exact opposite. Both cite safety and traffic flow. So who is right?"

From the article, "The same is happening in other UK cities, which have decided that signal junctions are better for traffic flow and safer for cyclists. But here’s the irony. After a century of resistance, US cities are finally learning to love the roundabout – the Bronx just got its first – believing them to be safer and better for traffic flow."

Mpls shoutout! "A surge in the popularity of cycling means that more than two million adults in England now ride bikes at least once a week. And while only one US city, Minneapolis, makes it into the world’s top 20 cycle-friendly cities, many UK cities (Newcastle included) are branding themselves “cycle cities”.

I noticed that other cities have green street programs that help collect stormwater runoff from streets. Does anyone know if Minneapolis has any intention to start a similar programs? With our proximity to the Mississippi, this seems like a good program to look into. 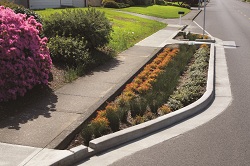 St. Paul does this during street reconstruction.
Q. What, what? A. In da butt.

On my previous block, the 2400 block of 34th Ave S in Minneapolis, the neighbors organized and tried to get funding to build six bump-out raingardens installed in the street. This would have the benefit of collecting stormwater (just blocks from the Mississippi River), but the idea was also to calm traffic on a street that had a lot of young children.

Ultimately, the plan stalled. The project was trying to get grants from the Mississippi Watershed Management Organization, and there were some ongoing discussions with Public Works, as well. It got complicated, years went by, and the project was abandoned. But it was a neat concept, and it would nice to see it implemented somewhere in the city.

Unsurprising that newer, better, but different concepts have to go through depressing layers of bureaucracy and extra process, but same old business as usual seems to get a hand wave without even a flinch to second guess it.

St. Paul partners with the Capital Regional Watershed District & Ramsey‐Washington Metro Watershed District to add raingardens. There are currently over 250 built in the last few years. I'm not sure exactly what the funding mechanisms are, but here are few examples.

Fairmount in Mac-Groveland has tree depressions/ curb cuts and raingardens with sculpture.

And this summer's Montreal Ave redo-
http://stpaul.gov/DocumentCenter/View/65082
Q. What, what? A. In da butt.

Good read. The article mentioned that California has a law requiring employers who provide subsidized parking for their employees to offer a cash allowance in lieu of a parking space:

Would the city be able to pass such an ordinance, or is this more of a state issue? My friend who lives in Uptown started working in Downtown a few months ago and drives every day because he gets a free parking space. Before he started that job he said he'd probably bike to work, but with the free parking space sitting there, that hasn't happened once. Similar story with my wife when she worked in the North Loop, where she also got a free space. Without that free space, she herself says that she'd have biked and taken the bus much more than she actually did.

These are just two people--how many downtown employees currently get free parking, incentivizing driving to work, leading to our car-centric downtown where we have to do things like remove a planted median to maintain four lanes for car traffic?

Yawn. More liberals telling the American people that they know better than the people what's good for them. Be sure the food cart next to the bus stop serves broccoli instead of nice juicy hamburgers too. Not many people are willing to eat broccoli unless we have a $10 hamburger tax.

And this is a "Road Geek" topic how? In my view roadeekers is about why MN 66 was renumbered from MN 256, not macro transportation policy.

Do you think that it does not cost anything for an employer to provide parking?

This isn't the case of taxing something undesirable. It's simply saying that providing parking has a direct cost, and an employee should have the choice to take cash instead of the parking spot. Especially important when driving is just horrible for the environment and so many aspects of our society, I don't see any problem with a law that creates a level playing field.

Do you truly believe that requiring parking cash out creates an unfair playing field and unfairly targets cars?

I agree with what you're saying, FMP. I also agree that this isn't the right thread for this conversation.

You're probably right about the thread appropriateness. Quickly looking didn't find one better and didn't think it needed a new one. Mods feel free to move it.

If an employer wants to give employees that don't use parking the option to cash out it's fine with me. It's the part that we should do whatever we can to punish anyone that has the nerve to drive a car that makes me roll my eyes. I object to sticks, not carrots. If they want to provide broccoli with cheese sauce or other "healthy" options that's fine with me; just don't ban hamburgers or tax them into oblivion; which is the point I got from the article.

Please explain to me how requiring parking cash out punishes drivers.

I got the articles a bit confused and mixed up. I was referring to Anondson's article and thought the parking cash-out with PhilmorPhils article was actually part of the the "carrots" being proposed with Anondson's article that weren't doing enough so now we need to start hitting motorists with sticks.

So once again I'm fine with a private business offering cash out. I'd even be fine if they chose not to provide parking (and I'd choose not to work there unless there was absolutely no other option, instead working at a business that did). What I object to is big government telling me I shouldn't be driving a car (or drinking a large pop. Or buying incandescent light bulbs).
Last edited by Mdcastle on December 23rd, 2015, 11:37 am, edited 3 times in total.

What I object to is big government telling me I shouldn't be driving a car (or drinking a large pop. Or buying incandescent light bulbs).

Ironic that driving's status as the 'default' transit mode today is the result of the decisions made in the past by big government.

What I object to is big government telling me I shouldn't be driving a car (or drinking a large pop. Or buying incandescent light bulbs).

Ironic that driving's status as the 'default' transit mode today is the result of the decisions made in the past by big government.

Exactly!! HUGE amount of big government went into and goes into roads. I object to big government not letting me walk around without the fear of being killed by a 2,000 pound polluting steel machine.

Mdcastle wrote:What I object to is big government telling me I shouldn't be driving a car (or drinking a large pop. Or buying incandescent light bulbs).

Okay, I'm going to try to not use the bland urbanist talking points that have already been tossed about a bit in response.

Monte, you've stated in the past (here or on streets.mn comment sections) that you support zoning (specifically, single family, use-segregated) because a person like you would feel harm/impacts if a multi-family building, etc went in next door. You'd lose privacy, potentially sunlight, potentially see increased congestion on your street. So, you're okay with Big Government telling people they shouldn't be ______ (in this case, live where they want to live, or telling a developer or individual they can't do X with their property) because there are negative impacts to a relatively small group of people.

Okay, now let's compare that to the government telling people they should maybe drive a little less. We know that cars pollute, locally (SOx, NOx, etc) and globally (CO2). We know there are sound impacts from freeways, we know higher rates of driving correlate with higher death/injury rates per capita. These are measurable negative impacts to human health, the economy, etc, even though they're spread over many people and on the whole relatively small (per person). Is it really that hard to imagine why people would advocate for policies, pricing mechanisms, etc that encourage other modes of transportation (or, long-game, living/working/shopping patterns) by making driving more "painful" (costly or time-consuming)? I'm not having a discussion of road subsidies or anything else here, just stating that (for the time being) cars have costs to society, just like new housing where you live has a perceived cost, and maybe it's not so terrible to encourage other modes.

You've tied your identity to being able to drive to the local shop or close-ish big box store no matter the distance or weather. That's great, maybe you'd pay extra to drive, or take a pay cut/drive further to work at a company who provided free parking. But what if the other people who live by you realized that it wasn't worth $0.50 to park at Oxboro shopping center ~3/4 mile from home? That a road diet made driving a minute or two slower and biking was a reasonable alternative because it was safer as a result? I guess I just don't see the big deal with both a carrot and stick approach as long as the stick is supported by solid research showing avoided societal costs.
Post Reply
276 posts