We had an official open house for the 46th Street project (east of 35W) at last night's FRNNG Annual Meeting. The county displayed their striping concept, which was largely the same as the neighborhood-drawn concept. The county's version should be on the Hennepin site within a day or two. http://www.hennepin.us/residents/transp ... /46-street

Feedback continues to be very positive, and we will be adopting a resolution in support of this proposal at our May meeting.

On the west side of 35W, Nicollet Ave was the main sticking point especially with Metro Transit. There were some minor striping adjustments that seem to have taken care of Metro Transit's concerns, and which would allow for motorists to sneak around buses are stopped at the bus stops along 46th Street at Nicollet. Supposedly modeling is still going on regarding this summer's restriping of Nicollet Ave through this stretch, and they are not yet sure if they will propose a four or three lane profile for Nicollet through the 46th Street intersection. Some people at last night's meeting made comments expressing disappointment that two blocks around Grand and 46th will have sharrows, which will be to preserve parking on both sides of 46th Street near that business node.

The City of Minneapolis will soon be the proud owner of a big pile of dirt.

Disappointed that MnDOT picked a Four Lane Death Road configuration for the rebuild of Hwy 23 through West Duluth (south of I-35).
http://www.dot.state.mn.us/d1/projects/ ... Layout.pdf

This would be the perfect place for a three lane profile, adding some on-street parking or more buffer to sidewalk/bike lanes.

Have you ever been up there, Matt? There's very little that fronts onto Grand Ave (Hwy 23) itself, so on-street parking wouldn't really work. It would effectively function as a shoulder. A good chunk of the corridor lacks development immediately adjacent to the road. It should also be noted that the Munger State Trail parallels much of the corridor, albeit without very many access points.

Not saying that a 4-lane undivided configuration was the right way to go...just pointing out that one of your ideas wouldn't really work, either.

Yes I've actually had a fascination with that area (due to its ridiculous "affordability" and decent bones) and have driven/walked/biked along it many times. All the little nodes except Morgan Park - West Duluth, Norton Park, Riverside Park, Smithville Park, Gary, New Duluth, and Fond Du Lac - use Hwy 23 (Grand Avenue) as their main drag. At least half of those have "traditional development pattern" right up against the street.

Are people in this area used to parallel parking, or is this one of the areas where most people haven't done it since their drivers test and would refuse to or even have no idea how to do it now. I can't help but think that's one of the reasons (besides fitting more cars in) that they put diagonal parking in on Penn-American.

Parallel parking just isn't a thing in Duluth. Most people park in a garage/driveway/parking lot at their home and then are either in a parking lot, ramp, or diagonal street parking at their location. There aren't even that many neighborhoods where street parking is tight.

While the 4-lane profile isn't a winner, it's not for the safety reasons mentioned. As someone who used to drive Grand Avenue/Hwy 23 about 3-5 times a week, typical concerns about 4-lane roads aren't an issue: The road has huge stretches of wooded—even rural—areas, very little turning (traffic always seemed to flow from a node to Duluth or vice versa...not much reason to go from node to node given the lack of amenities) and traffic is light. If anything, they could have whittled this down to a two-lane road for much of it with LTL popping up at the various nodes. This is really just a waste of asphalt, TBH.

Wow, the centerpiece of that article is a $50-70,000,000 project to DOUBLE CAPACITY on Hwy 23 in rural MN, a section of highway which sees 5,600 vehicles per day. In what world do people think that's a good use of funding?

mattaudio wrote:Wow, the centerpiece of that article is a $50-70,000,000 project to DOUBLE CAPACITY on Hwy 23 in rural MN, a section of highway which sees 5,600 vehicles per day. In what world do people think that's a good use of funding?

You're right -- that's pretty egregious. It's extreme cases like these that confirm my suspicion that transportation funding, and other urban/rural conflicts, aren't really about funding so much as about sociology. It may be an objectively ridiculous use of $70 million, but at least that's $70 million that won't be going to those City People (read: whichever dog whistle might happen to be in play at the moment).

Just remember, when it comes to transportation investments, we all do better when we all do better. Just like when 35W was built in the place of evicted low-income residents.

There's something to be said for closing the glaring gaps in our expressway network even if the raw traffic counts don't merit it. (See the new MN 60 expressway which has about 5,000 a day) It creates a cohesive system, encourages commerce, and increases safety on these routes that tend to have heavy truck traffic (and it sounds like there's a serious safety issue on this road. Let's stop the Minnesota Massacre!).

If safety is an issue, we should be doing everything we can to get people out of cars.

Sounds like a great place for a light rail and freight rail line to give people an alternatives to driving trucks and single occupant cars along the corridor an option. A lot cheaper than $50-$70 million to make the road safe and efficient.

They're painting (or have painted) new zebra-style crosswalks on Franklin Ave between 11th (at least?) and Hiawatha. The markings at 11th and Franklin are basically complete in all four directions.

Anyone know anything about this project?

I'm not sure if it's part of it, but the city is working on a crosswalk marking framework as part of the negotiation between it and the county for striping needs. It's putting more emphasis on full zebras with a 10' back stop bar, with way more durable markings, particularly on county road crossings. I didn't think the framework was done yet, but maybe it is (or, the county is just doing it to the design specs ahead of time?).

Does that mean we might see more zebras and fewer low-vis parallel lines? We went downtown via Park (and back via Portland) to get ice cream at Izzy's and walk along the river. Somewhere—and I can't remember where—we crossed dual green + white zebras and I was super impressed at how visible they were. Those are exactly the types of markings I'd love to see along the creek and other high-traffic trails in MPLS (if not everywhere).
The problem with being an introvert online is that no one knows you're just hanging out and listening. 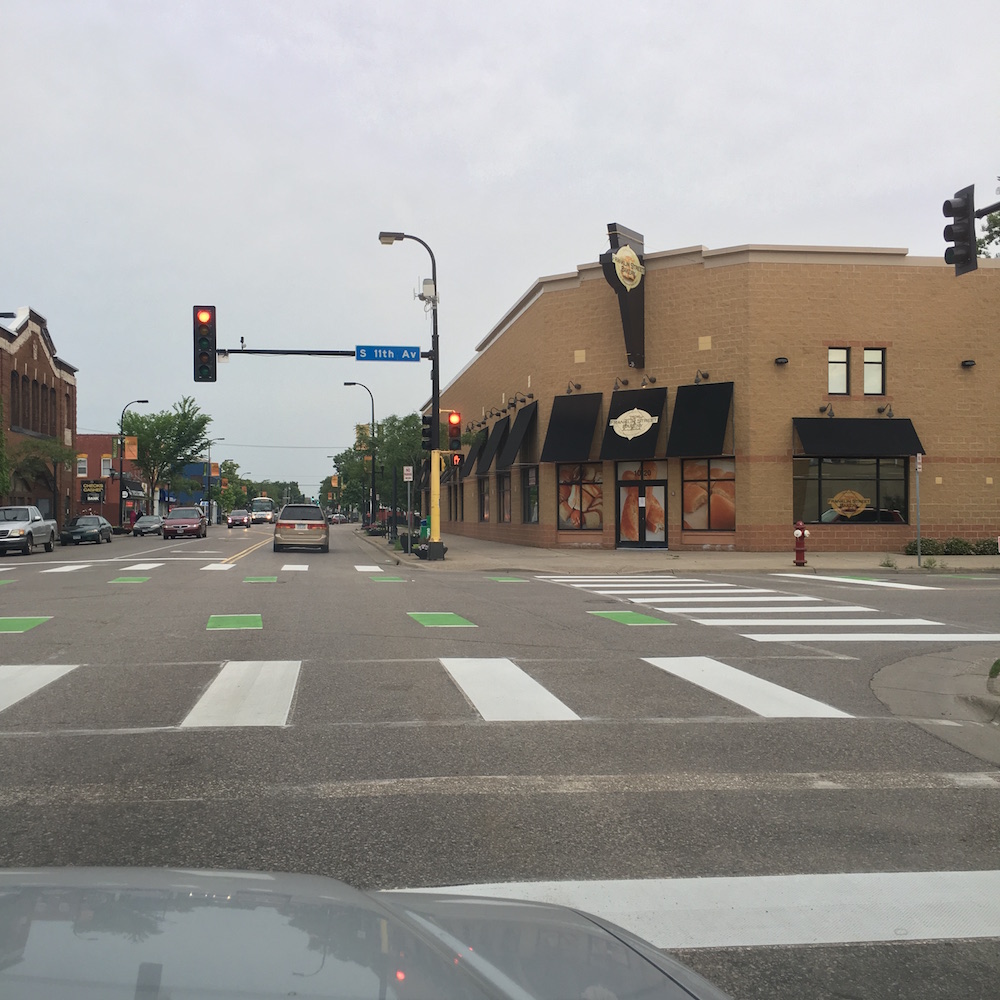 Looks like they're moving west from Hiawatha. I saw prep work for these as far west as Park.

Those are great. Except...let's have a talk with public works about lining shit up. /ocd
The problem with being an introvert online is that no one knows you're just hanging out and listening.

Does 11th change size as it goes through Franklin? Those boxes would need to be at an angle to stay X feet away from the outside curb.
Peter Bajurny
peter@bajurny.us
@FISHMANPET
Post Reply
960 posts