I'd much prefer Rush Line LRT to have its terminus on the SPUD concourse (alongside a Gold Line BRT station). Nothing else will activate the Depot quite like having transit riders INSIDE the Depot. Having eastbound lines terminate on the concourse (Rush, Red Rock, Gold Line, etc) and westbound lines in front of the Depot (Green Line, Riverview, etc) will really force SPUD to function as it was built to function. Simple signs can direct foot traffic (To Trains, To METRO Green Line, etc).

Plus, space constraints I think will force at least some lines to locate on the concourse anyway; there's just not enough space in front of the head house for that many lines. And, of course, again, SPUD was built for the capacity in back.

While it may be inevitable to have LRT under the concourse as well as out front, it's not desirable compared to the potential for a one seat ride. And when you're talking about rail lines going east and rail lines going west, it's not just a rider benefit to interline - it's an operational efficiency too. And the current station out front can easily serve four "lines" operating as two services (just as the Downtown Mpls stations do) such as Green Line operating to SPUD and Yellow Line (?) operating Riverview - SPUD - Gateway.

I hate crossing the platform to transfer between Blue and Green in Minneapolis, if I had to go up an elevator and through the depot to make a connection every day, I'd be very upset. Inside the concourse is not the place for local transit.
Peter Bajurny
peter@bajurny.us
@FISHMANPET

Weren't the long-term plans for the green line to have the central corridor terminate on the train deck as well? Why else did they already build an extra LRT platform below the concourse?

I think we've discussed this previously, but...

It's one thing to have the Rush Line service share the Green Line platforms, but it's something else entirely to make the Rush Line an extension of the Green Line. A line of that length, especially when the middle of it is operating along University Avenue, would likely suffer serious operational issues.

Except we're talking about interlining Riverview and Rush Line. My guess is it would be easier to interline through the concourse area than the headhouse area, unless they punch a hole out back of the OMF or something.

I meant to say Rush Line rather than Gateway (since Gateway looks like BRT at this point). There are already tracks out the back of the OMF, so it could theoretically go through there. Or, if that's problematic, it could turn north in front of the OMF along Broadway.

I don't think that's what everybody is talking about. Some people are talking about a one seat ride. How many people are really commuting from Cottage Grove to White Bear Lake?

We're not even talking about Red Rock, and Red Rock surely won't be LRT (BRT at best).

Operationally it probably makes a lot of sense to interline these two, assuming ridership is going to be somewhat equal on both sides of downtown.
Peter Bajurny
peter@bajurny.us
@FISHMANPET

I think most people are suggesting interlining Rush and Riverview, not Rush and gateway or rush and Central. Unlike the gold line both Rush and Riverview have strong possibilities of being LRT at the point. What we're really trying to figure out is how to share the most trackage possible throughout Downtown St. Paul so transfers are easier.

Another point against running a hypothetical Rush Line LRT to a concourse terminus: It limits connectivity for Rush Line riders. How many St. Paul CBD workers would really want to get off at SPUD and hoof it to northern/western downtown? Whereas, with interlining, it could gain at least one station (St. Paul Central) or possibly a second (10th St, but that's doubtful) before splitting off to Riverview.

And another point, which fishmanpet sort of made earlier: Having a same-platform transfer to the Green Line improves usability for Rush Line commuters heading to employment centers around the capitol, Midway, U of M, and Downtown Minneapolis.

I bet there's a good chance that ridership forecasts for Rush Line as LRT would actually be dependent on serving the existing SPUD LRT station out front and leveraging potential interline opportunities.

I certainly agree that sharing the existing tracks is the best option, all things being equal. I just won't be surprised if it's done on the concourse side and I don't think it would bad if it is.

mattaudio wrote:Or, if that's problematic, it could turn north in front of the OMF along Broadway.

To where, though? It's hemmed in by freeways on all sides. It seems much easier to stay on the concourse level and follow the old railroad corridor under 94. There would still be some complicated interactions with freight, however.

It would be really odd to have passengers running through the OMF.

I guess one of my bigger points is that running LRT on most of the narrow Lowertown streets around SPUD doesn't seem feasible. Broadway in particular is already constrained, and the ROW is blocked off by farmers' trucks during the Farmer's Market. And foot traffic from CHS Field would make it dangerous. Turning corners on any of these streets would almost certainly require demolishing property in a historic district.

Somehow I don't think having fare-service through the OMF is a good idea.

Could trackage run from 4th St E and continue down Prince St and then north alongside the railroad ROW? Theoretically I guess. But the 4th/Broadway/Prince intersection is already confusing and dangerous...I don't think this would help.

Yes, a one seat ride for Maplewood residents heading to the StP CBD would benefit from Rush Line running in front of the head house, making transfers to the Green Line easier. B for practicality's sake, I think stopping under the concourse is probably what will happen.

Let's not forget that there are lots of bus routes that use the concourse section of the Depot that are also worthwhile transfer points. The number of buses serving the Depot will probably continue to grow.

Again, what about routing the current green line tracks under the concourse? Wikipedia and a few rendering's i've seen of the SPUD restoration indicate that's the long-term goal. If we want seamless transfers from all lines then that's perhaps the path of least resistance.

No, that's not the long-term goal for the Green Line. That was an early design which was eventually discarded. The platform built at SPUD is mostly aspirational/historical -- it put something around the historic staircase and gives an indication that something might connect in the future. It's not tied to any particular project as far as I know.
Mike Hicks
https://hizeph400.blogspot.com/

We don't know the mode yet for either Riverview or Rush Line. Both could wind up as LRT or both could wind up BRT (and actually more like aBRT). I agree that interlining those two corridors is generally a good idea (likely even, if the same mode is chosen), but you are going WAY too far down the rabbit hole. Back it up to the actual projects in front of you.

I will give you that Ramsey County would love to see both lines end/meet at/through Union Depot to force people to use their fancy facility, but transit planners and consultants will be urging them to do otherwise so they actually serve the employment core of downtown St. Paul.

Well, since none of us are on the project teams, and both are in roughly the same stage of development, and even identified as transitways to be funded by CTIB (both mostly within Ramsey County, even!), I'd say it's pretty fair to be talking through some of these issues if there's even a chance they can be combined into one project. That would open up possibilities that an individual project wouldn't allow (the most ludicrous among them, a transit tunnel for both and even the Green Line for the last bit of its journey). It could help tip the scale toward a better mode where individually it might not pencil out, you can combine project staff, staging costs, avoid future retrofits, etc. Riverview alone would already be the shortest LRT project we've built in the region, so it's not like we're talking about combining CC+SWLRT into one mega project.

It's also important to be proactive, not reactive, to help prevent bad decisions from occuring.

Related (to the general thread) question. Does anyone know much about Hmong Village? It's something that I've only thought of recently, but it could be a good idea to have a "Hmong Village" station. It being essentially an ethnic mall, it could be a good opportunity for placemaking and equity, while strengthening the Rush Line itself.

A business community can more successfully lobby for improved transit than a handful of people on the internet (ayy target and united health ala blue and green line extensions, 3M getting BRT built into cornfields). I also recall from a neighborhood council meeting a few months back hearing about how the parking there is at capacity (even after recent expansion), and it looks like there's a good 350-400 spaces (users of which rotate throughout the day, and 1 car can carry more than 1 person, so there's probably a lot of traffic). That means that it would need higher capacity infrastructure to pull in more business (it's not even served by transit currently), while higher capacity infrastructure like light rail would inherently expose more people to it, increasing business further. I also like the prospect of sometime in the future being able to convert some of that parking space into more space for vendors. There seem to be a lot of virtuous cycle-type advantages.

for a quick idea of place: 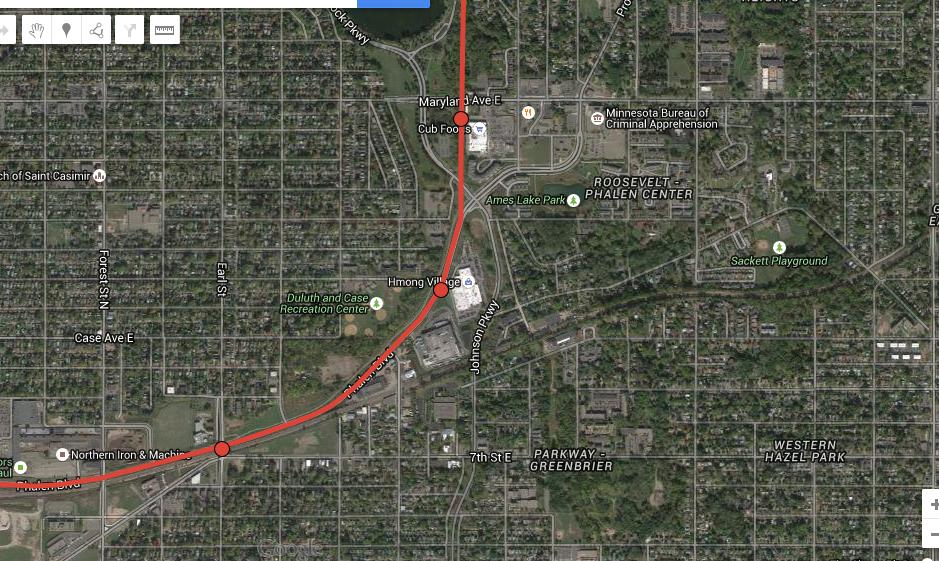