I don't dislike this routing, but to be fair, there's already a stop at Regions (Robert St Station). A stop on the north or east of the hospital wouldn't serve the hospital; there's no access on those sides.

The tracks on Robert north of Robert Street Station are sunk under the road grade. If switching could fit in the up hill track between the ped crossing at 14th and Robert and university, a curving open cut would be required to bring the rail to the university avenue grade at Jackson. A massive amount of utilities were relocated during lrt construction and now sit under Robert street. I don't see it working. Running lrt through the maintenance facility to swede hallow with a operator relief at union depot would be much more feasible.

I think shuffling utilities might be an easier sell politically than to try and squeeze a train through the 4th/Broadway intersection, especially in a part of Downtown St. Paul that's actually doing well right now. Not to mention this would be the only opportunity to bring that area of the city into the LRT system.

Outside of chs field events and farmers market the fourth and Broadway intersection is very sleepy. I bike through there at 5pm with some regularity. The obstacles aren't just a simple relocation of utilities. It would be cut and cover tunneling and rebuilding of the utilities and Robert street or cutting off Robert and moving the utilities over to Jackson or, if the lrt couldn't meet university grade before Jackson, relocating utilities further east. Oh did I mention the tracks aren't at a constant grade or 100% straight north of 14th?

The swede hallow route would still touch a lot of destinations at 7th and minnehaha. Running through the maintenance facility would put them equa distant to central v Robert and university.

It just seems incredibly silly to me that running an active train line through a maintenance facility is considered more feasible than possibly reconstructing infrastructure ten years down the road. 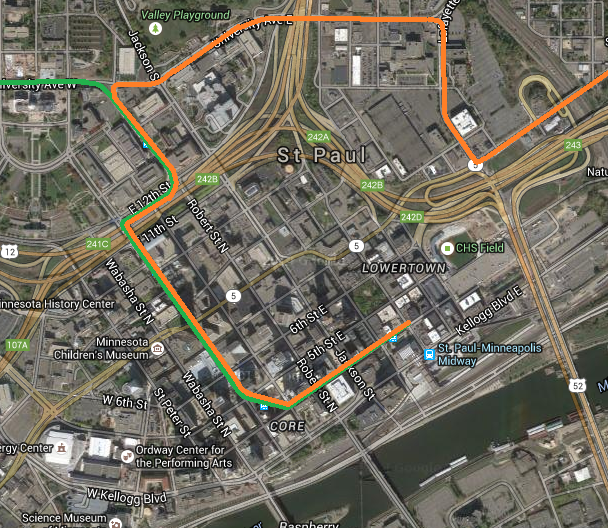 This seems to preclude interlining with Riverview.

Unless Riverview somehow wrapped around SPUD and cruised along the south side of the bluff. Of course, that routing would effectively have a double U turn (west at SPUD, east at Cedar St). But it would likely allow Riverview to be built at the bottom of the bluff while still allowing for a one-seat ride to the CBD via that U-turn. I think someone actually suggested that on the Riverview thread, but now I can't find it.

I don't think the one-seat ride is as important as the operational efficiency. I just don't see someone taking LRT from WBL to the airport. Perhaps someone closer to the CBD would do this, of course.

But many may want to take LRT to the airport from the Capitol area (Robert St station), or the CBD (Central Station). And, if it's so determined that Riverview best approaches downtown from the bottom of the cliff, then doing the U-turn around SPUD would afford these opportunities. Interlining isn't usually about a one-seat ride from end to end (just as few will likely take the Green Line from Mitchell Road to SPUD) but it's about providing more one-seat rides and origin-destination pairs along a longer stretch of corridor.

Whether we're talking about Riverview, Rush Line, or any other... The issues are that there's much more complexity to interlining trains through Downtown St. Paul compared to Downtown Minneapolis.

Minneapolis has a nice straight-shot E-W spine across Downtown that can serve four lines as two services, and beyond that it would make sense for future services to orient on a north-south spine along Nicollet (and Hennepin or Central across the river), and few grade change issues of concern.

St. Paul's major trip drivers are spread out (Capitol complex/Regions, Xcel/Rice Park, SPUD/Lowertown). St. Paul has bluffs and major grade changes to deal with (Riverview up the bluff, Rush Line Swede Hollow, etc). And the existing LRT Green Line does its job well, but doesn't provide easy forwards compatibility with more services: The tracks terminate right into the OMF building. The tracks form an L through the CBD at Central Station. And there are three other doglegs to go around the Capitol complex.

The downside to all of this is that, for Riverview, Rush Line, and even Gateway (if LRT had been chosen) is that there's no "common sense" connectivity. The upside is that we have an opportunity to plan these lines, and the services which will eventually operate on these lines, using a systems approach to optimize their routings (and leverage our existing track/station investment to increase connectivity).

The downside to all of this is that, for Riverview, Rush Line, and even Gateway (if LRT had been chosen) is that there's no "common sense" connectivity. The upside is that we have an opportunity to plan these lines, and the services which will eventually operate on these lines, using a systems approach to optimize their routings (and leverage our existing track/station investment to increase connectivity).

Hence why I did what I did.

Regarding VAStationDude's comment, I would suggest that my maps are at least junior-level. I do take a look at topography, slopes, and distances when evaluating my concepts.

I agree your suggested route is feasible though I would prefer planning around using the Vento since it is owned by the public and hits metro state and minnehaha well.

For the record my amateur transit planning skills are no higher than sophomore level.

I agree your suggested route is feasible though I would prefer planning around using the Vento since it is owned by the public and hits metro state and minnehaha well.

I initially used the Vento, but I didn't like the geometry of getting it underneath 94 then over the BNSF lines to connect to SPUD.

froggie wrote:The depth needed under an LRT overpass (minimum 8', optimum 10') plus the parking garage entrance on Sibley north of the train deck is why an at-grade LRT crossing of Kellogg and Sibley won't work..

It would be an embankment, not an overpass. Except where it goes over the parking portal, which already has limited clearance under a deck that was designed to carry trains. This would possibly slightly shorten the distance to rise the 8' between the corner street level and the train deck. This is conservatively at least 130' of usable frontage prior to the parking access, still providing just a hair over 6% grade.

I've got some more precise numbers for consideration after giving myself a post-summer math refresher. While I used circular and not parabolic curves, they're probably close enough for our intents and purposes.

Assuming a 6% grade, the crest and sag curves required to reach that grade total a length (rounded up a few feet) of 120 ft, while descending 3.5 ft (rounded slightly down). With a grade of 6%, we'd then need an additional 75 ft length of track to descend the other 4.5 ft (for a total of 8 ft) relative to the train deck. If Sibley didn't rise at all and the garage door wasn't there, then this would roughly just work out (195 ft needed, a bit more than that available).

Between the crosswalk on Sibley/Kellogg and the barrier posts marking the parking garage access is (a bit over) roughly 150 ft (looking top-down, not along the sidewalk). That would bring us down around 5.3 ft (curves + shorter middle portion). Because the beginning of the vertical crest curve is largely flat, it could probably be cheated over the doorway somewhat, though I don't have any measurements for this, and it probably wouldn't be needed to make LRT fit (though it could perhaps be used to lessen the grade a bit).

So, assuming we can't relocate/redirect the parking access, we'd need Sibley St to rise a bit under 3 ft, ideally more to lessen the grade. Without going to Sibley/Kellogg to measure, I've found two things in google streetview that indicate Sibley rises at least 4-5 feet.

The first would be the Custom House's bricks.
https://i.imgur.com/YBwT8tt.jpg
For reference, the standard height of a door is 6'8". That would imply one block is roughly 3 ft tall. Of course, the door highlighted in red isn't necessarily standard height, but it's unrealistic that it would be different enough from standard height to make a difference. The blue marks on the left indicate (roughly and conservatively, of course) where the garage access is on the other side. Following the brick up to the intersection, it looks like about 3 are lost. While the bricks do look like they all line up horizontally as they should, in case there's some cheating going on that isn't immediately obvious, we can round down by a brick and still get a 6 foot rise.

The second is the garage's ceiling, back on the SPUD side of Sibley. This overall has less to reference and more "eyeing it" than the last one, but is also helpful. https://imgur.com/e4wXeSM
The garage entrance itself has a reference point! Now, assuming I haven't been wrong about this my whole life, that white tube marks what you must clear, in this case a height of 7.5 feet. Following the structure towards the intersection, a similar amount of height appears to disappear as on the Custom House's side.

Now, if I had to bet money on the relative height difference along this stretch, I would say 8-9 feet, which would give us a nice and gentle slope.

Even if there are other factors that play against my conclusion,

tl;dr it seems pretty clear that the geometry works here (the horizontal curves work too).

It's a godd*mn rail corridor!

StarTrib wants to start another big fight here. I don't necessarily agree with the neighborhood, but this train; if it's the chosen option, would follow standard downtown to suburb LRT standards. Really wish they could've looked a bit harder at having it run down 61 all the way to WBL.

Yeah the strib is trying to make this Kenilworth 2.0 because anything with the words "LRT" or "Met Council" gets huge page views. However I'll be damned if this isn't a lot like the SWLRT controversy.

They're so focused on getting the line to work for Forest Lake and Hugo that they're forgetting that way more transit riders live in dense areas their alignment zips straight past.

If they're so focused on Forest Lake and Hugo, then why do 2 out of 3 recommended options (including the only rail recommendation) stop in White Bear Lake?

I agree with David, though I love rail-trails. I think somehow we need to better communicate that a railbanked trail is still legally a transportation corridor because that message has clearly not been getting across. I wonder, for example, how many people understand the legal/political difference the Gateway State Trail (owned by DNR and not railbanked) and Bruce Vento Regional Trail (railbanked by RC Regional Rail Authority).
Post Reply
512 posts