Oh, and my comment also applies to Riverview too. CTIB has made it pretty clear they will only fund that line before 2030 if LRT is chosen. No bus, no streetcar. I've got to believe there's a similar sentiment for Rush line. These east metro projects have such low ridership that the only way they'll get support is if they are fast regional connectors. Look what happened to the Robert street corridor, once one of the farthest advanced projects, basically died on the vine when LRT was ruled out (for very similar reasons as rush line too) and aBRT/Streetcar was left. Don't let that happen here.

acs wrote:because nobody including the met council wants to fund a $1 billion streetcar.

Hahaha! Someone forgot about the Green Line! (only half joking) 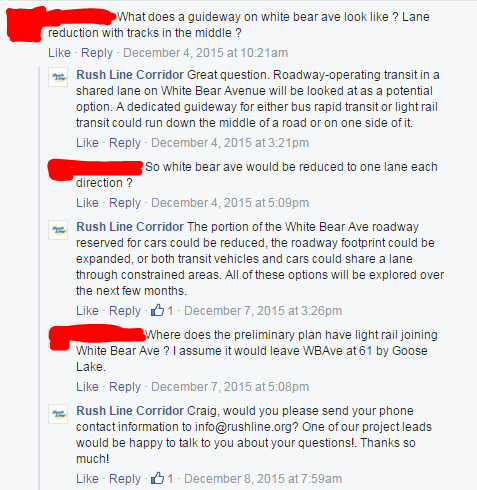 And a reminder that while shared lanes are probably certain in the southern areas of White Bear ave, they're looking at taking lanes and/or expanding the road's footprint as well, both of which they can realistically do in the central/northern stretches of WBA. Also a reminder that WBA would only be ~1/3 of the line.

We're gonna need to see the somewhat more detailed plans they're working on (which we also know can change further; Some of the increased cost for both SWLRT and Bottineau was additional grade separation which wasn't initially part of the plan; Engineers are good at working these things out) to make decently accurate judgements.

Once you get north of the I-694 vicinity, there's no reason why WBA needs to remain 4 lanes. Everything north of Orchard Ln sees less than 10K AADT. That segment could easily see a lane taken away with LRT running down the center...the only footprint expansion necessary would be at station locations and left turn lane bays. Even then, I think it could mostly be done within the existing sidewalk footprint. The only place where it looks to be a bit tight is at County Rd E.

Went to the "Downtown Stakeholders" meeting Monday and got an updated map of potential routes and station locations.

In our meeting there was overwhelming support for routes 8 and 1, particularly 8 and adding a stop at Regions hospital for a quicker transfer to a Green Line train going westbound without having to go further into downtown.

For option 8, why not continue on University north of Regions, then turn onto Robert and share Robert St. Station with the Green Line?

I suppose the geometry of the University/Robert intersection maybe makes a wye there difficult.
Joey Senkyr
joey.senkyr@outlook.com

I think option 2 is probably the best we can reasonably hope for - the through-routing of Green Line trains would be a huge benefit operationally, and would probably reduce costs a good deal. Option 8 would probably be better. I really like option 1, ignoring operational issues, but agree with Silophant that it produces an odd jog to not have it join the Green Line at University. Engineering-wise it's of course really difficult to imagine working out a junction at that location, but honestly I think the engineering of option 1 would probably be too difficult anyway, even the way they have it.

It's likely there will be a strong institutional push for option 3 because it would be easy and cheaper. Against that, option 2 looks like the best competitor that still loops north to get more urban uses.

Idk if we'd get through-routing with Green Line trains with any option. A single line from EP to WBL would be, close to 40 miles long, with a end-to-end time of like 3 hours? I think a better bet would be through-routing this and Riverview (assuming they both wind up as LRT), basically creating a NE suburb-Airport mirror of the Blue Line.
Joey Senkyr
joey.senkyr@outlook.com

I miswrote. The favorites were 8 and 2. Option 1 was bus only due to grade issues on Jackson I think and also added like 5 minutes to the trip.
Adding to Green line was not considered because SW corridor to WB Lake was indeed to long for the operators.

How can we completely evaluate any route that enters downtown on East 7th (Options 2, 3, and 4) when we don't know how it will reach Union Depot, especially if LRT is the mode decided upon? The map clearly states routing and connection to UD are yet to be determined. To me it seems impossible to truly decide which is the best alternative until that is figured out, no matter the mode.

Also I have a friend at MPR who has insisted on multiple occasions that the organization would be adamantly opposed too any additional LRT tracks or trains next to their building. That would certainly an additional layer of challenges to any future LRT project, including both this one and Riverview, in downtown.

A representative from the city was there, and he made it abundantly clear that the city does not want another set of LRT tracks tearing up downtown streets. I sort of thought some people at the city, such as the mayor, might welcome having a different LRT line coming into downtown so easy access to a transit line could be had from residents who aren't near the Green Line - say at Wacouta Commons, but he assured me I was wrong.

If LRT is chosen, 8 is a good route. It would be nice to serve E 7th/Metro State with LRT, but getting to the cluster of medical buildings on Cayuga is a decent tradeoff.

Vagueperson wrote:A representative from the city was there, and he made it abundantly clear that the city does not want another set of LRT tracks tearing up downtown streets. I sort of thought some people at the city, such as the mayor, might welcome having a different LRT line coming into downtown so easy access to a transit line could be had from residents who aren't near the Green Line - say at Wacouta Commons, but he assured me I was wrong.

It would primarily serve (many lower-income) residents, so of course the city doesn't care.

7th Street is still very much in play for Riverview (as is the 5th/6th pair I'd assume), so there's no reason it wouldn't be here as well. Any new route through downtown (i.e. not existing LRT tracks on 4th) would be mixed-traffic, as the hybrid streetcar-LRT concept is the only way there will be rail service down West 7th.

Green Line has enough potential frequency that it could easily interline either with this or with Gateway. But, as mentioned, an issue would be the length of the line and break times for the train operators.

A modification of Option #7 is what I've proposed in the past. This, IMO, is the best way to provide interlining through downtown St. Paul, and the close proximity of the Lowertown yards allows for easy train storage.


Yea, that does sound nice on paper to have but how they line up don't seem to be working that well. I personally would LOVE to see a new let's call it "Purple line" from White Bear lake to Union depot taking out most of Price St. going through downtown on existing green line tracks, all the way to Capitol station. From there it would travel south along Rice St. to a new Sears redevelopment block/St. Paul college station. Then south down Kellogg to a new Xcel Energy station then continuing down 7th to the Airport and existing blue line stations.

Sure it would be a bit of an unnecessary loop back into downtown with another downtown station, but St. Paul is pretty small anyways. Would be nice, but even that route might seem a bit to confusing. Of course if Gateway is BRT and Rush is BRT might be pointless to link them together in one line given that 99% of people won't be traveling from end to end.

It would be silly if both Rush and Riverview (assuming LRT) fed into the Green Line, terminating into the Lowertown OMF, instead of interlining, considering how obviously beneficial it would be to do so. If the city tries to push that decision I'm going to raise a ruckus.
Post Reply
502 posts