mattaudio wrote:We're doing things now that were far afield of reality 5 or 10 years ago.

Actually, we aren't. I can't think of any major transit project we're doing that wasn't anticipated over a decade ago and many longer than that. Freeways have pretty much been expanded as expected. Development has proceeded much as people anticipated, with a big recession bump in the middle of it.

I'm sure there are one or two things happening we hadn't anticipated but it's not like we've had a revolution in planning and development.

Nick wrote:What would the MNdible of 1950 think about United States or Minnesota transportation policy in 1950?

This was my thought, in a non-snarky way. I would say the fact that I-35W/94 are there in the first place is the result of untested ideas (not saying MNdible disagrees), and it flat out doesn't work (congestion abounds, induced demand for decades of polluting transportation mode choices, neighborhood exclusion and de-valuation, etc). I think if we look to other developments across the world, recognize the differences in cultural preferences/history, and go from there, we'd see that there's enough evidence this could work. I agree initial land sale won't cover the costs, but ongoing taxes could help pay back bonding, perhaps come close to covering the payments - I ran some numbers a while ago assuming a ~$200m cost (?) and equivalent property valuation (sale) & taxes (bond repayment) from Mill District development showing it somewhat pencils out. Can't remember where that was though.

I'd also say I appreciate MNdible's responses as they ground me and my (sometimes idealistic) ideas - if he (a self proclaimed 5%er) has hesitation or thinks it's too outlandish, it makes me reconsider how far ideas would go politically - we had some good back and forth in the NE thread. mattaudio's right that the fantasy stuff may help move the needle 1%, and the hopeful ideas that may actually have a chance shift the conversation. Hell, the fact that the U (a reputable institution with more weight than some late night fantasy bloggers/posters) had multiple design proposals for stuff featured on a 1.5 year old streets.mn says something.

Also, my personal experience (not data-driven) using that loop at many times of the day in college says it could probably go, with better cycle track/conflict design for the SB on-ramp from Washington. Just my take.

To be fair, I doubt the Streets.MN posts were the primary factor behind this design competition. I've seen some of these freeway lid proposals going back many years - it must be a recurring project in some sort of design/planning class. But that means these "fetish maps" aren't limited just to UrbanMSP

Nick wrote:What would the MNdible of 1950 think about United States or Minnesota transportation policy in 1950?

I really have no idea what I would have thought about stuff back in the 1950's -- it's pretty difficult to put yourself in that spot, knowing what we know now and what we didn't know then, the general zeitgeist of the time, etc. I think that if people on the board were being brutally honest, most would have to admit that they might have supported this at the time.

The existing condition, flawed though it is, made sense to a lot of people at the time. I don't know the history of this area at all, but I never remember hearing about anybody protesting this section -- it wasn't until later that anti-freeway NIMBY's (dare I say it?) started trying to block projects. Perhaps that's because, at least based on historical photos, this area was always a little bit of a raggedy industrial area?

Induced demand in an area like this is tricky -- it's not like lanes built out to greenfields. Let's say that we hadn't built it. Certainly that traffic would have needed to shift somewhere, but what would that have meant? Does it mean that jobs centers would have shifted elsewhere (more than they did anyway)? Would that, coupled with a general disinterest in our urban centers that occurred during the latter part of the last century, have had very destructive effects on keeping downtown Minneapolis as the core of our urban area?

Question: Once-upon-a-time I saw a mid-century drawing of a proposed freeway cutting into downtown along Washington Ave from the east as far as Nicollet(?). Was the freeway-ification of 3rd/4th at this interchange intended to continue into downtown as that particular route?
The problem with being an introvert online is that no one knows you're just hanging out and listening.

I stop to see the lid today after getting depressed watching the Twins do another dismal outing. I'm curious as to where one enters and exits 35W on the south sides of Washington. It is somewhat a challenge to see exactly where car traffic routes will end up. Was not sure about the pedestrian only streets, but they are again primarily by the proposed schools so they could woofner and allow busses to line up for delivery and pick up of kids. It will definitely help the 7 corners area in the long run. The biggest plus is a station at the convergence of the blue and green lines so you are not putting that burden of transferring on the Metrodome station alone. I thought it was a cool proposal, A little out there, but still I think very doable.

mister.shoes wrote:Question: Once-upon-a-time I saw a mid-century drawing of a proposed freeway cutting into downtown along Washington Ave from the east as far as Nicollet(?). Was the freeway-ification of 3rd/4th at this interchange intended to continue into downtown as that particular route?

That's exactly the proposal I'm thinking of. My Google-fu today is weak, so I wasn't able to find the image that's stuck in my head. I assumed that the freeway would have started as 3rd/4th and followed the RR ROW to Washington.
The problem with being an introvert online is that no one knows you're just hanging out and listening.

Is that what we are taking about?

Sorta. That was an older drawing by froggie. Most recently in this thread the U of M had students produce a concept for this exact same location that interestingly has come to a similar concept to solve issues with that area.

Ha! Found the proposal I was thinking of. Lileks to the rescue, naturally. I know I've seen a wider version of this that shows more of the west and east ends, but it's easy to imagine how this would have connected to the current 3rd/4th trench. 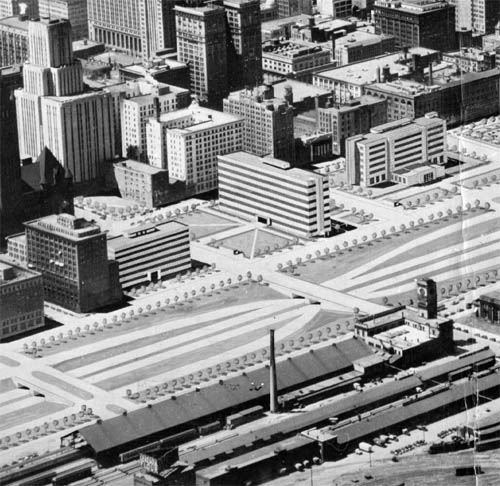 Yeah, thank the heavens that didn't happen. What an awful idea.
The problem with being an introvert online is that no one knows you're just hanging out and listening.

At the time it probably wouldn't have been a big deal. Most of that area was either industry or railyards.

The train station in the foreground is on the north side of Washington Avenue. The rail yards were mostly north of Washington, not south.

Another take on the topic.

I love the idea and the ambition of the project but with currently large supply of developable or redevelopable blocks in DTE there is a pretty good chance the new land would just end up as a bunch of parking lots for 25 years. Let's let the current supply dwindle a little bit before we get too ahead of of ourselves.

There's a good thing going in DTE right now, no reason, at this point, to toss in a huge new variable that could upset the entire real estate market in the area.
Last edited by BigIdeasGuy on April 12th, 2014, 1:49 pm, edited 1 time in total.
Post Reply
139 posts