by minneboom
With the new Surly Brewery, the future Minnesota United Stadium, and potential transformation in Prospect Park, it seems timely to restart discussions about using the Short Line Bridge to extend the Midtown Greenway into St. Paul. This bridge has serious potential to help connect bikers and pedestrians to all this new development. Additionally, it could service the future street car running along the Midtown Corridor, providing a shorter link between the Blue Line and Green Line.

by ProspectPete
Where exactly is the Short Line bridge?

by Silophant
That's the rail bridge a few blocks north of the Lake/Marshall bridge. It's adjacent to 26th St. on the west side and St. Anthony Ave. on the east side.

by EOst
Canadian Pacific won't allow a bike path to be added to the bridge, and it won't sell it until the last few users of that spur stop needing it.

EOst wrote:Canadian Pacific won't allow a bike path to be added to the bridge, and it won't sell it until the last few users of that spur stop needing it.

Is that because by adding a bike path creates a potential liability for them, if there was an accident?

by minneboom
If I am correct, the only remaining business are ADM Milling and Leder Brothers Metal Company. Is there any incentive or buyout offer that Minneapolis can give to the last remaining businesses to relocate? In the future, the ADM Milling site would be an ideal location for a project similar to the Mill City Museum or A Mill Artist Lofts.

The other project that ties into this discussion is the continuation of this line, which runs through the Longfellow neighborhood. This line runs between Highway 55 and Minnehaha Ave and plans call for it to be converted into a Greenway. This would provide a very nice connection between Minnehaha Falls Park and the Midtown Greenway.

by ProspectPete
Ahh, OK. So this is the bridge that hooks into the midtown greenway. Didn't they just recently announce that they were ceding part of their line that went from Franklin across 94 to the U of MN? Seems like they are pruning their network little by little. But when I ride over 94 on Pelham, I look down at their tracks and there does seem to be quite a bit of rail cars parked on it.

by mattaudio
Where have you seen plans for the MNNR Minneapolis Spur to become a greenway? That seems doubtful since it's sandwiched right between the LRT trail and the Minnehaha Ave bicycle lanes.


ProspectPete wrote:Didn't they just recently announce that they were ceding part of their line that went from Franklin across 94 to the U of MN? Seems like they are pruning their network little by little.

Yes, Canadian Pacific filed with the Surface Transportation Board and FRA to abandon the remainder of the old Milwaukee Road "Dinkytown Connector" between the Interstate 94 bridge and Essex St. (We have a thread for the apartments proposed for this right of way between Essex and 27th Ave SE.)

It is my understanding that Cam Gordon and possibly others were going to file a writ of intent with the Surface Transportation Board to start the process of railbanking this segment for future transportation use.

by MinnMonkey
Do our LRV's still get delivered by rail? Besides near the Sabo bridge, I can't think of anywhere else our LRT tracks connect up to the freight network.

It would be quite easy to configure space for LRV delivery by rail behind the St. Paul OMF, crossing Willus Street. And, by the time any of this happens, we'll hopefully have rail extensions paralleling the BNSF/CP lines through Bassett Creek and the BNSF Wayzata Sub and TC&W through Kenilworth.

by minneboom
The 46th St Master Plan calls for green pedestrian and bicycle corridor along the Soo Line Cooridor, or the MNNR Minneapolis Spur. As the Blue Line corridor starts to get more residential development this will provide valuable green space for residents.

For additional reading, here is a nice article about the potential of the Short Line Bridge.

by minneboom
Here a page from the 46th St Station Master Plan, where you can see the plan for a green bike/pedestrian corridor. 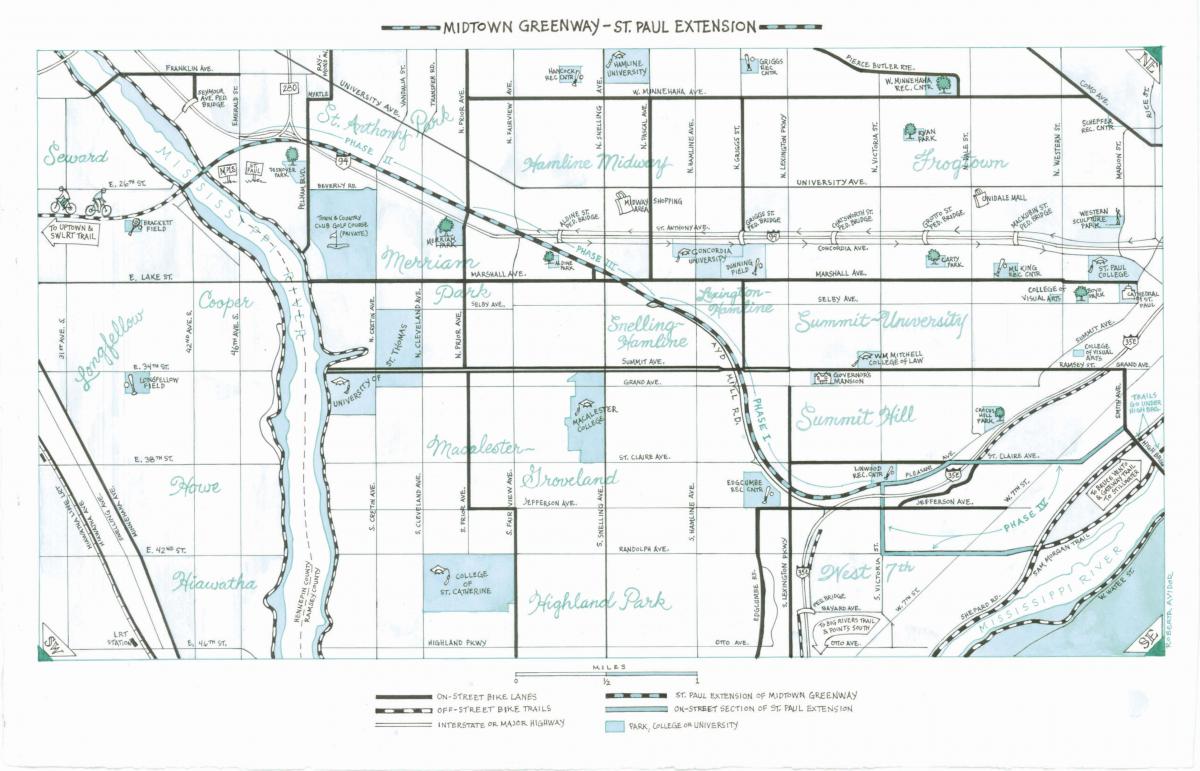 by talindsay
I live a couple hundred feet from the Short Line bridge and can tell you that there's more traffic on this line now than fifteen years ago. It's not a lot, but it's enough to remain profitable for them, I'm sure - probably 4-8 trains a day. There was an arson on the bridge several years back; at the time most of us assumed they'd abandon it because it was going to take substantial investment to both fix and secure the bridge; but they did both, so clearly it's worth it to them. The bridge now has gates at both ends to keep people off the tracks, and they're manually opened by an operator and then closed after the train passes through. There had been discussion of *sharing* the bridge with the trail before the arson, but I think the railroad's goal now is to make sure they don't risk another arson.

by mattaudio
I bet the RR would sing a different tune of they could sell the bridge then lease back trackage rights to operate over it from the public entity. But I'm guessing HCRRA and other public entities have no interest in paying "market rate" whatever that is for a major railroad bridge. Compared to what they'd spend if it was abandoned.

by DanPatchToget
It was suggested somewhere else before, but with the spur leading towards U of M's East Bank abandoned it would be a good opportunity to have the Midtown Streetcar go across the river and head north to the U connecting with the Green Line's Stadium Village Station. Whether it would be alongside the current freight rail only time will tell.

But Actually! The before is also a current picture of the Greenway, you can tell because of the "Eat Street" branding on the bridge which was put in last summer. They just applied a film filter to the photo to make it look old (or someone else did and gave them that photo), so it looks like a 90s picture cheap film camera picture.