Bus service was suspended this morning.

My philosophy has always been let's improve service first before we discuss free fares since a free fare is less useful if the service is terrible (I won't say transit service in the Twin Cities is terrible, but there's a lot of improvement needed).

Perhaps we should make fares more simple such as not having different fares for peak and off-peak, exact dollar amount for fares ($2 local, $3 express) so it's more likely people won't need change, the fare being valid for a longer period than the current 2.5 hours, etc.

I hope we see a big increase in aBRT and high frequency routes this next decade. If we can have a great network of connected routes, I believe we’ll see higher ridership. People love transit that is easy. My friends don’t hesitate to use NYC Subway or Chicago L trains. Here, they only use the light rail.

I'm pretty sure I am in the minority on the forum by kinda disagrees in just making Metro Transit completely free since while most people say the fare box recovery ratio is so small that it would be better to just fully subsidize it, I do think it might be worth while taking steps to improve it since its a somewhat more stable source of revenue that relying on what ever ever state the current political climate is.
I know I've said it before but I kinda wish Metro would try and push card and app payment more through various means since I can see a few ways that there better than relying on the physical paper tickets

I don't think free fares will do anything to improve ridership. People don't choose not to ride because the fare is too expensive. They don't ride because transit doesn't work for them. Many of our buses only come every 30 to 60 minutes and Metro Transit randomly doesn't operate some trips because they don't have enough drivers.

Who wants to wait in the cold for a bus that may or may not come? Who wants to take 45 minutes for a trip that takes less than 10 minutes in the car? Why is there almost no bus service in Northeast Minneapolis?

If we had more frequent and reliable bus service ridership would go up. Fares aren't the issue.

Korh wrote: ↑
January 5th, 2020, 4:06 pm
I'm pretty sure I am in the minority on the forum by kinda disagrees in just making Metro Transit completely free since while most people say the fare box recovery ratio is so small that it would be better to just fully subsidize it...

You can take that money and invest in new service, or you can give it away every year in refunds. One approach builds sustainable ridership, the other gives the system a sugar high.

Here’s an important question; does the fare revenue outweigh the cost of maintaining ticket machines and employing fare enforcement, and if yes by how much?

To say nothing of the non-monetary consequences of fare enforcement.

With regards to the ticket machine maintenance, I've said it before and I'll say it again but I wish metro would push card and app payments more in the hopes of phasing out the ticket machines to an extent since they seem to cost less to maintain and offer the added benefits of offering more flexible discounts and improving boarding times. Granted the go-to card reader isn't perfect, I've had some experience where I've gotten on only to be informed by the driver that the reader was malfunctioning and to not pay.
Now with regards to fare enforcement, are we going on the assumption that that is the main if not only reason for the MTP and if we eliminate the need for it we could essentially dissolve the group. At best I think we'd be able to cut the current 120 full-time and 60 part-time officers by 3/4ths if not a bit more if fares where free on the entire system, but I still think there would still be a need for a small number here and there.
Edit: TBH I would kinda prefer if the MTP was treated less like a actual police department and more like a security forces since just like a few other things it isn't metros job to act as an additional police force when every city it serves already has one.

I’m on my bus home. The driver just picked up a few people while mid-block in the left lane of Marq2. He then skipped the scheduled stop 50 feet away that had multiple people waving their arms at him.

I feel terrible for those people he skipped. Thankfully this time of day the wait is only ~10 minutes.

And furious at the folks that boarded far from the designated stop. This past week I witnessed my 12 driver chastise an elderly hospital visitor going from Park Nicollet to Methodist because the rider stood at a light pole 50’ away from the stop.

From the February Connect newsletter:


Routes will change March 14
Beginning Saturday, March 14, changes will be made to routes operated by Metro Transit and Maple Grove Transit.

You can review schedules at http://www.metrotransit.org for the routes starting Saturday, Feb. 15. Updated printed schedules will be available on buses and trains and at Metro Transit stores and outlets starting Feb. 24.

I can't find the changes online. Anyone have the link?

Rt. 27 is changing it's western endpoint to Lake/4th and the western start point to 28th/4th.

Rt. 54 will have a long term detour from W 7th to Shepard Rd to 35E to 494. Most trips won't serve the airport (except a few late/early westbound trips). The construction will start sometime after March 14th, so the detour route will only be in effect once that starts. 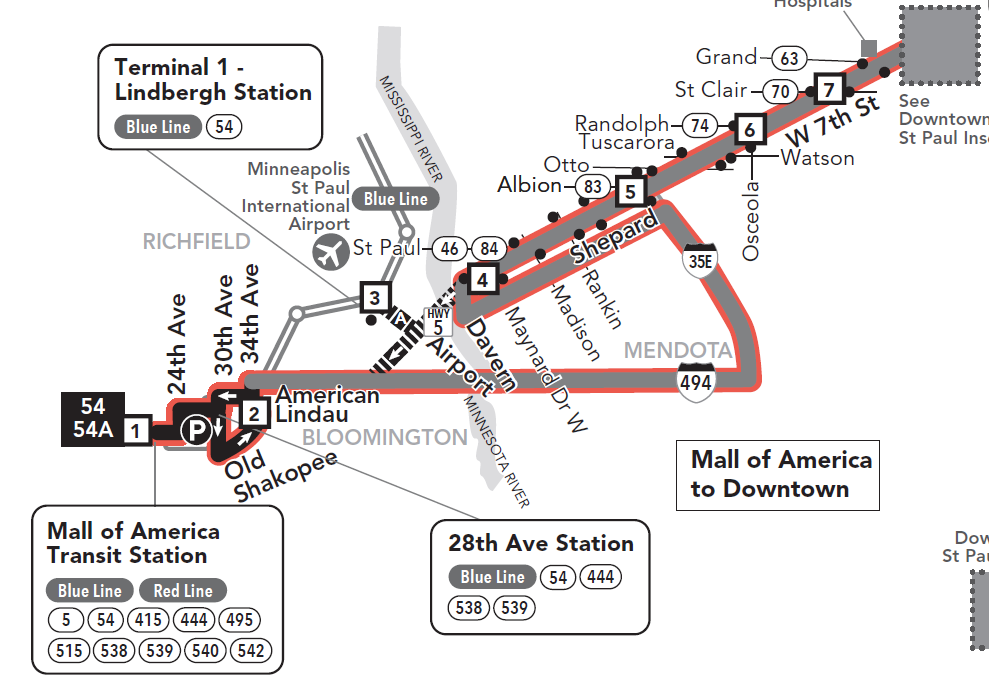 The new maps are so out of scale that it makes the detour look awful. I imagine that the ramps to/from W 7th and Hwy 62 are going to have pretty heavy traffic - likely making the idea of a connection to the Blue Line at Fort Snelling out of the question.

Looks like the project will run from April to October.

How is the new map of this detour out of scale?
I think the reality looks far more awful.
You do not have the required permissions to view the files attached to this post.

Metro Transit is requesting a change to their CMAQ grant for Rt 63 service improvements. If it is agreed to, Rt 63 will be shortened to Sun Ray and improved to every 15 mins on Weekdays and Saturdays. New Rt 323 would replace service on McKnight and also extend to Woodbury, operating every 30 mins. These changes would happen in June 2020.

Someone said something about the route for earlier, I can’t find the post now. It would be great to see the route forget high frequency service. If this is actually something that’s in the planning, I sure hope they would try and experiment with some Bas only lanes on Lyndale between 28th St. and Franklin.

I hope one day in the future, they investigate upgrading the four to a BRT style.

If there are plans to upgrade the current route four, which segment would get high frequency?

The first phase of the Highway 5 construction will only close the EB lanes, from April to August.

I think they *could've* still served the airport with WB Rt 54, at least till August.
Jonathan Ahn, AICP | hello@jonathanahn.com
Drawing lines on maps and dreaming really hard for living.

I was thinking the same thing about the 54 detour. Perhaps they think that there will be heavy congestion on WB Hwy 5 from the detour? If the traffic has less of an impact on travel time than the detour, they really should consider operating what is possible. A lot of airport workers live near the Maynard stop, so they are going to be highly affected.
Post Reply
2372 posts