On time, on budget, scheduled to open in December, according to Jim McDonough.

Ramsey County Regional Rail Authority has supposedly moved their offices into the building as of last month (May).

Here's a shot of where the actual Amtrak lobby area will be. They're busy tearing up a strip of Kellogg Boulevard in order to build a drop-off bay for cars. 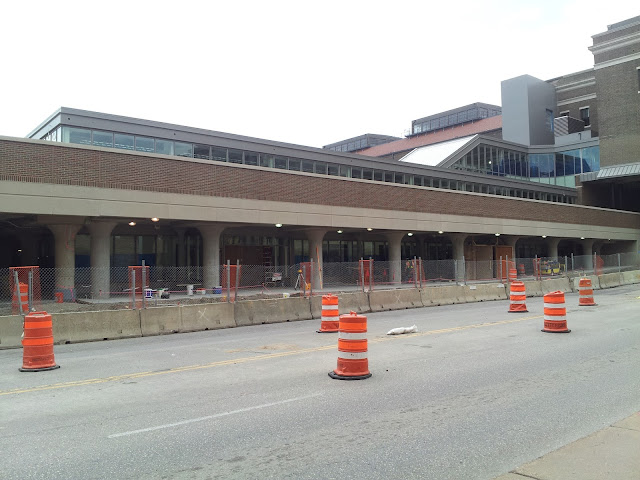 I haven't been able to take a tour of Union Depot, but it seems that based on Ramsey County's photostream on Flickr, rails are already being laid!

A reminder of the construction webcams:

Was in the depot and caught a glimps of some of the work on the platform from the skyway from TPT to the depot. Things are looking good!!

I guess it's fairly old news at this point, but it sounds like the contracts are getting finalized -- Jones Lang LaSalle of Chicago will manage the retail spaces at the depot, while One on One Bicycle Studio will run the bike center.
Mike Hicks
https://hizeph400.blogspot.com/

A photo of one of the new charging stations by the Union Depot. Pretty slick looking!

So from what I've been seeing it looks like they ended up deciding at some point not to build one of the 800ft commuter platforms up front and spent the money on restoring the "historic stair" and building a 300ft LRT platform. I guess the southern track of the southern commuter rail platform is being built about half-way for storage?

Any word on when Amtrack service moves into the Union Depot? I've got a Dec 20th trip to Portland booked and I'd much rather leave on my honeymoon from Union Depot than Midway station.
Peter Bajurny
peter@bajurny.us
@FISHMANPET

I went to another Passenger Rail Forum meeting today. I'll avoid saying whose mouth I heard it from since things are up in the air and I heard the answer after the official meeting -- there's still no official date, but maybe February or March. I have no idea of whether to believe that or not.

I don't know any specific completion date for the depot project itself, but presumably the drop-dead date would be December 31st. The only thing to extend beyond that is apparently the bike trail heading through the site toward the Bruce Vento trail -- it'll be finished as far as the Lafayette Bridge site, but it might not get built through there until the bridge is done. East 4th Street is closed because of the bridge construction (at least officially), and I presume that's what they'll aim for with the trail.

I got to go on a tour after the meeting. Yeah, that LRT platform is there, even with the yellow tactile edge. It makes no sense to me, either. It might be the terminus of a Gateway Corridor line, though that makes for a fairly awkward transfer. Oh well, not any different than the buses that will come in, I guess.

They were in the process of paving the bus platform when we were there, so I didn't get to see much of that.

The new structure along Kellogg Boulevard just east of the concourse/waiting room will have 4 "retail" spaces kind of tucked under the train deck. One is expected to be used by Jefferson Lines, two by Amtrak (one for ticketing, another for baggage), and the last one might be used by a rental car service (probably Hertz, who have a small operation at Midway station).
Mike Hicks
https://hizeph400.blogspot.com/

Cool to see car rental going in. Are there any other rental companies operating in DT STP?

Yeah, it looks like there are two or three: Hertz appears to have a location at Holman Field.
Mike Hicks
https://hizeph400.blogspot.com/

So, they announced the public art grants. I'm pretty disappointed. Half of the artists are out of state, and one of the projects is a large suspended sculpture in the Great Hall. So we painted it ugly colors to match how it was historically, but we're going to hang a giant steel & glass sculpture from the ceiling?

What's the point of new public art with the restoration of an old building? The art IS the historic stuff... restore as much as possible (the old clocks, ironwork, etc) and call it good.

mulad wrote: I got to go on a tour after the meeting. Yeah, that LRT platform is there, even with the yellow tactile edge. It makes no sense to me, either. It might be the terminus of a Gateway Corridor line, though that makes for a fairly awkward transfer. Oh well, not any different than the buses that will come in, I guess.

They are building a light rail platform, with no tracks leading to it? I was not aware. Is it being built where they are restoring the original stair tower? (Photo from March) LRT is in front of the head house.

I know that. Mulad's quote made it sound as if they were building a light rail platform in back as well, for future use.
My flickr photos.

Yep, you read that correctly. A platform with no tracks anticipating some sort of East Side service.
Mike Hicks
https://hizeph400.blogspot.com/

Well, they went and put the maintenance facility in the way. I'm sure there are ways of doing it, though -- clip a corner of the Farmer's Market site, for instance, or maybe a little S-curve at Broadway down to Prince Street to run along the side of the maintenance base.
Mike Hicks
https://hizeph400.blogspot.com/

Why not let it just go through the maintenance facility?
Post Reply
375 posts