I believe the route 94 bus will actually start/terminate at SPUD in 2014 once the Green Line starts running, along with other bus service changes. I do agree that other routes could/should be routed to/from SPUD as well, but that would definitely require a pretty extreme reworking of the downtown bus circulation.

I thinly you mean the 3C alignment

This is the first evidence I've seen of any work being done to connect the SPUD tracks to the mainline -- some dirt has been cleared from the right-of-way outside the depot property. I'm not sure when it happened, but my photo was taken Friday evening. 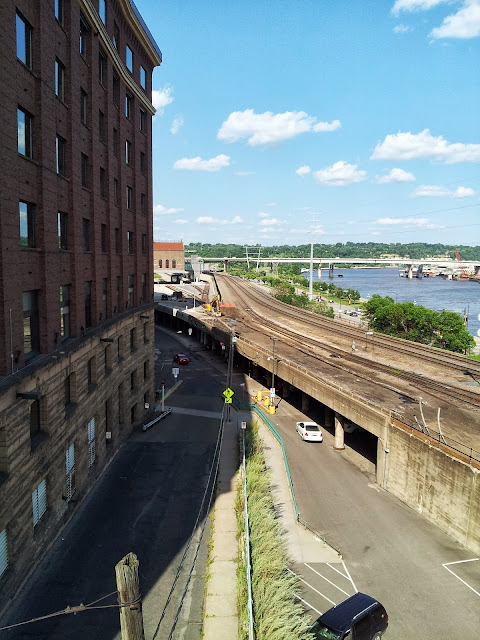 Yep, definitely something going on... 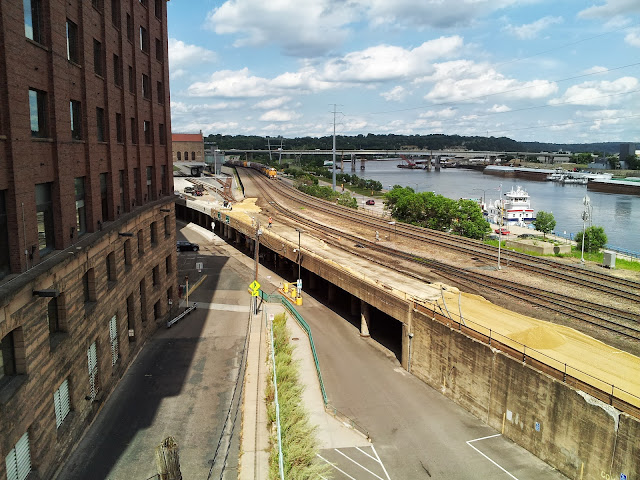 Going under the Robert Street bridge... 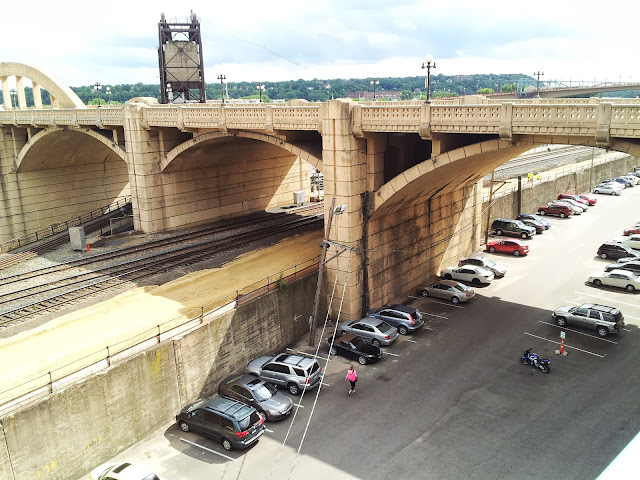 This was really a shot of the West Side Flats development, but has track work in the foreground... 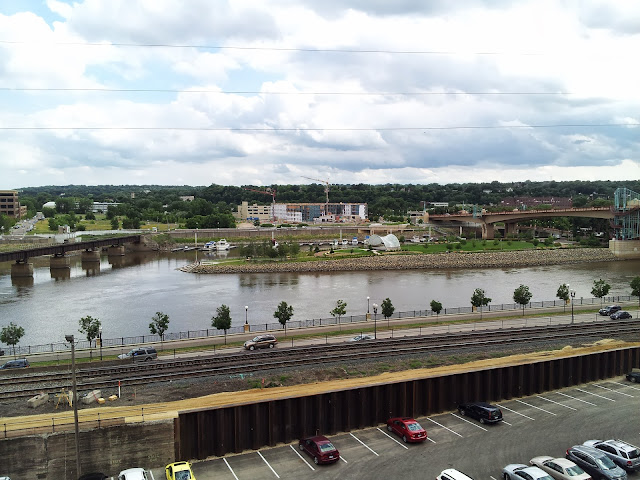 And they're using triangular tracked wheels on the earth-moving equipment... 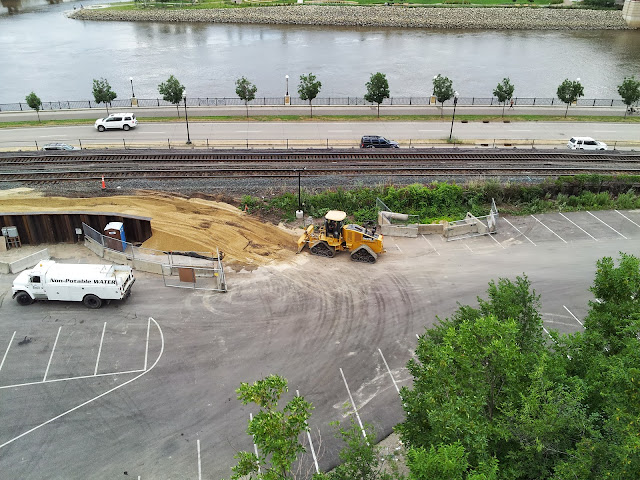 At the start of Rondo Days earlier this month, the BNSF Foundation donated $10,000 toward creation of an exhibit about Red Caps at the Union Depot.

Is there a date set for when trains will start using this?

No set date yet. When I was on the WB Empire Builder, several passengers definitely took note of the Union Depot and wondered why we weren't stopping there. The sooner they get this link going, the better.

I have a new job prospect with a company in Eagan. In looking up schedules on the Metro Transit site, I would actually be using Union Depot on a daily basis which has me rather inexplicably excited, even though I would be spending more time on my daily commute than I do now.

Totally off topic, but can we SPUD t-shirts? I just love the acronym. Maybe with the depot superimposed over a potato or something like that. In Seattle we had S.L.U.T. (South Lake Union Trolley) t-shirts, SPUD thou is more family friendly

I think you mean 'SPUD, thou art more family friendly'.

An event called "Station to Station" is scheduled to happen at the depot on Thursday, September 12th (two weeks from today). There was a fancy article on Wired's website on the subject, mostly focusing on the lead artist of the whole "art happening". It involves big digital display panels being mounted on the sides of train cars. I'm not totally sure how this is going to work out since trains still can't access the platform. The article shows the planned train consist, which includes a number of cars from the local Milwaukee 261 group (including the Cedar Rapids Skytop Lounge).

Here's the page on the project's main website about the St. Paul stop:

At least one new switch has arrived. This was sitting at Robert Street this evening. West side switch for SPUD by Mulad, on Flickr
Mike Hicks
https://hizeph400.blogspot.com/

My apologies that both of these are hard to see, but another switch has arrived by Robert Street, and there are workers lining up new sleepers/ties to the Union Depot. Also, Ken Avidor posted a sketch yesterday:

The railroad ties are being butted right up against the wall at the moment: I spent quite a bit of time in Union Depot recently. I was wondering what the area will be between the bus concourse and the heavy rail concourse... there's an area with a concrete platform and track area filled with ballast rock, but no tracks.

Matt Steele wrote:I spent quite a bit of time in Union Depot recently. I was wondering what the area will be between the bus concourse and the heavy rail concourse... there's an area with a concrete platform and track area filled with ballast rock, but no tracks.

That area has been reserved for a future light rail platform, should they ever decide to route light rail trains to the back. Since no current plans call for its usage, it is likely to remain a historic stair to nowhere for a while. There is also space set aside for another heavy rail platform.
My flickr photos.

Word on the street is that Amtrak will be bringing their Exhibit Train to the Union Depot on December 7th. Their website currently shows the event happening at Midway, though.

Just downriver, there was a big mess this weekend when a piece of pre-assembled track that was being transported banged into some signals, causing an old-style signal bridge to get dragged for some distance and bash into the Warner Road bridge over the tracks. The old signals were in the process of being replaced there too.

Also, the busway at the depot was showing cracks and is in the process of being repaired under warranty by the contractor. I'm not sure the result will be that great, though -- the patch job may end up looking worse than the cracks did. I'll try to post a photo in a bit.

There's work going on by 52 and near the wye complete with 4 car ballast train, and saw a new signal bungalow by the end of the platform.

Finally brought my DSLR to work on Friday so I could get some shots in the evening. I'm planning to take another pass by this afternoon. They were in the process of replacing the Robert Street switch that lets trains cross the river here. Well, it only looked like they were finishing off the work for this one switch when I went by today -- they were getting the ties properly placed on/in the ballast, and a Union Pacific train was waiting in the wings ready to cross the bridge as soon as they finished [Edit: Actually, that may have been the ballast train commissioner was referring to]. I'm guessing it'll be a couple more weekends of work before the depot tracks finally get hooked up.
Last edited by mulad on October 6th, 2013, 8:28 am, edited 1 time in total.
Mike Hicks
https://hizeph400.blogspot.com/
Post Reply
375 posts