Current cost estimate for fare is around $30 one-way. I'll post their proposed schedule when I can. Overall it was a good open house with a lot of support. The Duluth station proposal is also looking really good. 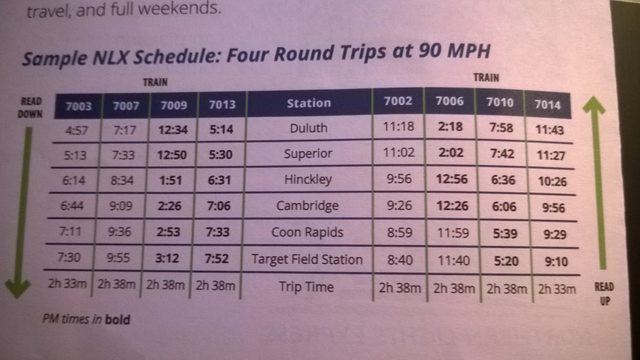 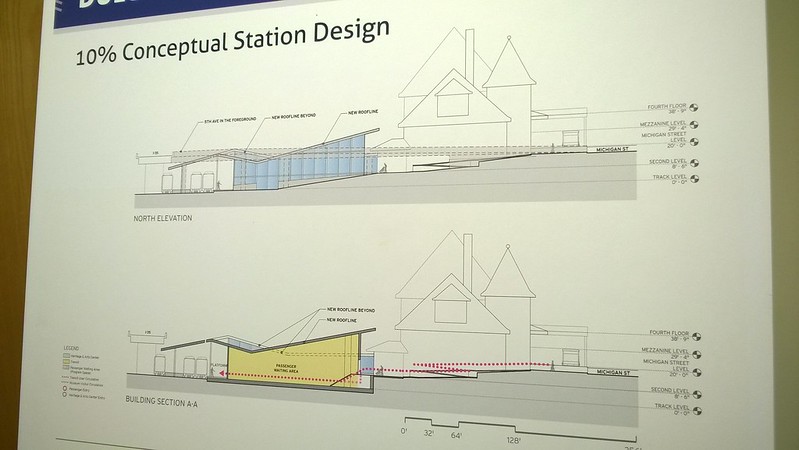 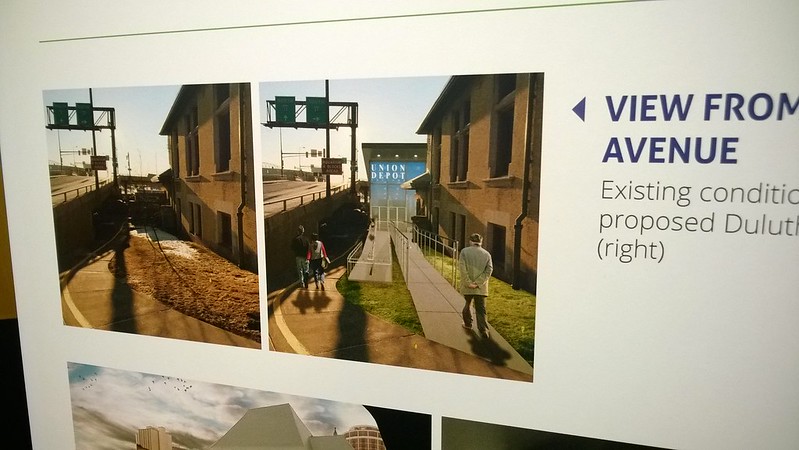 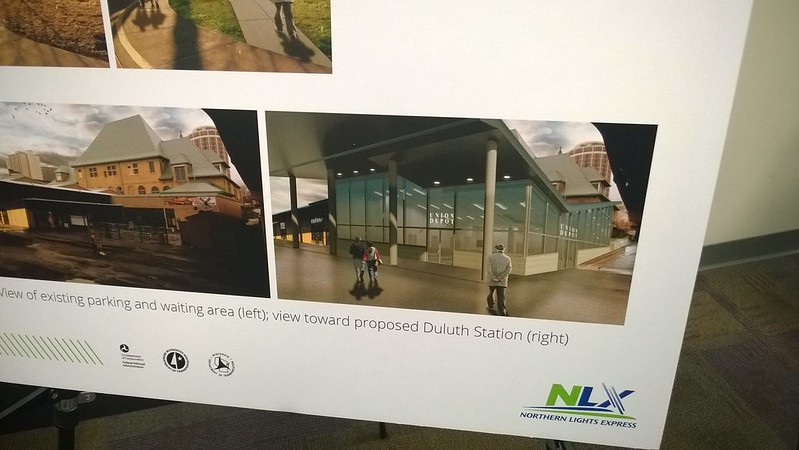 It's amazing how much of the "touristy" part of Duluth is just parking. That too, has to change for this line to be a success. Part of the problem with drawing people away from driving is that it's just way too damn easy to 70MPH+ literally until you turn into Canal Park(ing lot)

Also, Google pegged my driving time from south Minneapolis at 2:20, which actually makes the train look pretty competitive! Of course, in reality I'm going at least 79MPH most of the way and shrinking that down to about 2:00 flat.

Note: I don't think the train is too slow. It doesn't have to be faster than driving. The question is if people from outside Minneapolis will use it enough. It can't just be people who can take a short bus/LRT trip to Target Field Station. Obviously there's always CRapids Station for people living north of say, Lowry Avenue.

I was also hoping the trip times worked better for folks commuting downtown from Hinckley and Cambridge. As it stands, there's one AM trip that works pretty well, but the single evening trip out is on the late side. Anyone getting to work at 7:45-8:00AM probably gets done before 5:00PM. I would greatly prefer if two trips each direction could be timed to also serve commuters into Minneapolis, but I guess that one trip pair isn't timed too terribly.

P.S. Another interesting non-NLX angle to watch is if they* plan for Northstar trains to stop at Coon Rapids Foley or not. You might be thinking "Why in the hell wouldn't Northstar stop there, given the existing 1000+ capacity park&ride?" But I am almost certain the current plan is "no change" for Northstar.
("they" being Metro Transit, CTIB, and Anoka County)

What would the fare for Hinckley to the Twin Cities be? Would it still be the full $30 or more like $15 one way? In either case, you could likely rule out commuting with NLX.

Perhaps Hinckley was a stretch for commuting. Cambridge though? Absolutely should be thought of for commuting purposes. Same fare as Big Lake. If and when this thing gets built, gas prices will likely have returned to "normal" $3+ levels.

People commute from Milwaukee to Chicago on $50 round trip. There's a major discount card you can buy that saves people a lot of money. I would assume something similar may be set up on NLX if it's sold to commuters.

I could see Cambridge commuting work. And I'll walk back a bit from criticizing commuting from Hinckley - the cost of living savings could be substantial enough that it could appeal to someone. But there wouldn't be many of them.

Agreed that there wouldn't be many, but I'm sure there's a few. I've worked with a couple guys at Xcel that were commuting from Duluth(!)

And, as twincitizen said, gas is likely to be back up to "normal" pricing by the time this would open, so gas+downtown parking would run a Hinkleyan $25/day or so. Depends on what you factor in for maintenance/depreciation and value of your time spent not driving, but a $30 roundtrip on NLX doesn't seem unreasonable, if the timing works out.
Joey Senkyr
joey.senkyr@outlook.com

Bonus if the proposed schedule holds up: The Cambridge-Target Field train time is ~7 minutes faster than the drive time without traffic.

It would make complete sense for anyone currently in Hinckley who has a job in the cities, no question. Would it be something that encourages people to move to Hinckley? I'm not sure. At least in a Milwaukee/Chicago situation, at the end of the day you're in Milwaukee.

phop wrote:Bonus if the proposed schedule holds up: The Cambridge-Target Field train time is ~7 minutes faster than the drive time without traffic.

I bet that is probably due to 65 being an expressway with multiple stoplights with only a few limited-access interchanges.

twincitizen wrote:It's amazing how much of the "touristy" part of Duluth is just parking. That too, has to change for this line to be a success. Part of the problem with drawing people away from driving is that it's just way too damn easy to 70MPH+ literally until you turn into Canal Park(ing lot)

Well, the chance of this line actually getting built just took another big hit. I would put the chances below 30% for the foreseeable future.

C'est la vie. Despite my advocacy for the route, I think this probably increases the chances of the route getting built. But I still think the average GC goer is going to want to drive and park at the front door. Opportunity lost, but if that opportunity was too expensive, it's best that it doesn't happen.

You guys need to look beyond the simple cost/benefit here. I totally agree that a GC loop is too expensive when shuttles to a downtown station might work. That's not how politics work though. The tribe are currently the biggest supporters of this project left at the table, and they only support this because they believe they can replace their bus shuttles from the metro. Duluth couldn't care less about this project, it's so far down their list of bonding proposals. The small counties along the route might support it but they have little to no population or say in the grand scheme of things. Anoka pulled their support of this and they have more population than the rest of the route north combined. That leaves the tribe and their casino. If this project doesn't work for them, they are out and you can officially can this. Maybe they will still see some cost benefit to the shuttle plan, maybe not. At the very least I'd say getting the Tribe to pay for part of this is definitely not going to happen, which again leaves funding/support at the state level on the backs of very few people.

I imagine if they cancelled their downtown shuttles and only offered a shuttle that meets the train instead, it would still be a significant savings to them.

But if the casino is in these talks, they are the party with the biggest pockets. If they really wanted the train to come to them, they have had years to propose a split cost, some sort of private/public partnership, etc. that would have let them drive the train to their front door. Since the option is being taken off the table, they either did not propose one of these things, or their proposal included something that planners didn't like (maybe naming rights, or ad rights at stations in perpetuity).

The train still benefits them by stopping at a town that arguably has no purpose other than their casino. And I think 'Duluth couldn't care less about this project' is not accurate at all.

Also, I think Anoka pulling their support has more to do with the fact that their only major transit project was built half finished through their county, and they don't want to be left holding the bag on another unfinished project. Apples to oranges in this case, but I get it.

VacantLuxuries wrote:Also, I think Anoka pulling their support has more to do with the fact that their only major transit project was built half finished through their county, and they don't want to be left holding the bag on another unfinished project. Apples to oranges in this case, but I get it.

Not to mention there aren't a lot of transit-focused/friendly board members!
Post Reply
357 posts