One of these would do very well in Uptown.

Next to Calhoun square in our future Hotel right?

Also... I'm so excited for the Day when there is a Target Express, CVS, and Walgreens on one corner somewhere.

I was discussing this with a friend in DC who thought this was a great concept but was concerned that it would take away from smaller retail shops in urban areas.

I disagreed being there would be less trips to a big box store, the possibility of more people be comfortable being carless, and the fact that this kind of retail would probably synergize really well with retail nodes and help create shopping districts rather than crush them? Anybody see these as a bad thing?

I agree that when I saw this I thought it would compete with CVS and Walgreens. I haven't had time to read all the articles... have they said which departments would/wouldn't be part of the express sized stores?

mamundsen wrote:I agree that when I saw this I thought it would compete with CVS and Walgreens. I haven't had time to read all the articles... have they said which departments would/wouldn't be part of the express sized stores?

Basically it sounds like the pharmacy, some clothing, and some housewares. The average Walreens is roughly 14-16k where these will be just a little larger at 20k.

This basically goes over the facts already noted, but I did find one nugget I wasn't aware of before (maybe just ignorance). 40k sqft commercial total between 4 storefronts. Target taking 20k. I wonder if the remaining will be 10k and 2x5k spaces? Either way, lots of opportunity here for more restaurants/shops for the area.

In a one year time period, this traditionally commercial corner will go from 3 storefronts, a large surface parking lot and an old high-school-gone-semi-failed-business-incubator to 8 storefronts, hundreds of more people using bikes or walking as a primary mode of transportation, and less students commuting from the burbs. The architecture of this specific project leaves many things left to be desired, but the coming boon to the area will be felt very very soon, on both a business and street level perspective.

Maybe the "New Dinkytown" will become THE "it" place to be in the near future. Basically the opposite of what many of the loudest opponents to these projects expect.

It already is an it place to be. Not sure I understand your point?

Since Nick reposted the pictures (Thanks!), I'll repost my comment.

This already looks like the cheap, dumpy student apartments of 2018.

I agree. I've waffled back and forth on this one.. the townhouse-like units on the north side may be ok, and the addition of retail (including evil Target offering fresh groceries) is a big positive for the neighborhood. But the scale of this thing is just so.. massive. The lack of 13th st connection is a slap in the face of Mpls goals. And it looks super cheap already. I still can't believe this building passed completely under SD's radar - a lot more to hate here.

It's a behemoth of a development, for sure, and yeah this should have caught the attention of neighborhood activists over the Opus project.

Extending 13th Ave SE through the site would've been quite costly though. At least 15% of the parcel would have needed to be acquired by the City for right of way. Even if we used eminent domain, we still would have paid dearly for it. Likely more than $1MM just for the land acquisition, not to mention extensive legal costs (especially if the developer was an unwilling seller), and the costs of construction for the connection.

A better approach would have been to demand a permanent pedestrian and bicycle easement through the site, rather than actually acquiring land. The City really didn't do enough on this end, but then again, I'm not sure there was any means for them to do so.

In the future, if we really want connections like this to be planned and paid for ahead of possible development (such as the 8th Ave connection in North Loop), we need to get them in the 5-year Capital Improvement Plan. The CIP is a large citizen-member board that plays a role in deciding what projects get funded. It would be great to get several UrbanMSPers on that board.

Small area plans that identify connections like this are great, but they don't have a cent of actual spending attached to them. This is especially true of projects that would involve new streets or trails. Those items actually need to be planned and budgeted for by Public Works.

I agree that Mpls funding it via eminent domain wasn't the right route to go. IIRC, the design of that area already has a pedestrian walkway, it wouldn't have been as big of a fight for the city to force the ped/bike easement - wouldn't have been much wider (if at all?) than what they currently have. Too late, obviously, just confused how it wasn't a priority.

Save Dinkytown claims that this development was the impetus for forming their group, but they couldn't ramp up in time to save it. To be honest, I'm not sure I buy it, since all it takes is a couple people to go to a meeting and speak. Hell, it probably would have been more effective than the approach they took with the Opus project, because I think the PC saw them as a bunch of cooks when they started meandering into talking about the global financial crisis.
Peter Bajurny
peter@bajurny.us
@FISHMANPET

I'm not offended by the density or added retail here — as I've said in other threads, I'm happy for underutilized areas of Dinkytown to be improved. What strikes me about this building, though, is that it just looks so cheap and thrown together.

The city very easily could have demanded a 15' bike/ped easement and construction of a facility as part of the CUP process. That is more or less what they did with Soltva. I'm guessing the blame falls to CPED - perhaps staff suggested it and the developers balked. It really should have been a deal-breaker for the city, though - realistically a developer would have come along in short order who would have been willing to have a smaller building or two buildings at this site. I tried to show up at the meeting and speak against this proposal specifically because it violates several sections of the comp plan which speak to a restoration of the street grid, but it was on the consent agenda, which was voted on before I arrived (I couldn't arrive at 4:30 due to having a full-time job).
"Who rescued whom!"

It is pretty massive. Here's a crappy view (sorry took the pic while in the passenger seat of a moving van) from 4th St SE. 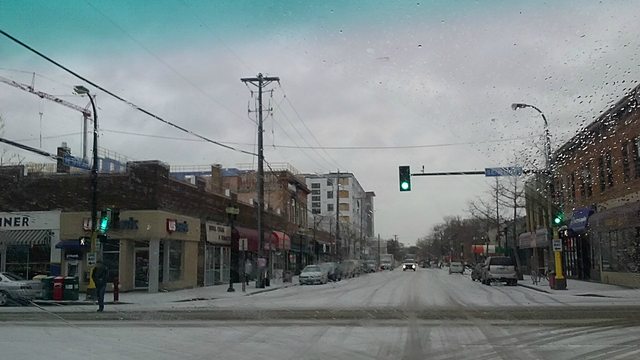 Eh. I'm a big fan of the Beetlejuice doorway in the interior courtyard, though.