For anyone here or at OLoL that questions the how an historic church and modern tower can possibly get along without the church being irreparably harmed, a wonderful example is the 1999 Broadway building in Denver. What is being proposed for the Nye's Block is not nearly as extreme and therefore should be more than possible to execute well and in a respectful manner so long as proper precautions are taken to protect the church structure.

Alright, I'm in favor the Hennepin development and all, but honestly, that Denver church looks ridiculous.

Yeah. That's a little ridiculous. And look how empty the surrounding area was when they proposed it.

There's one new neighbor across Broadway, but otherwise this site looks almost exactly like that today.

Daboink wrote:For anyone here or at OLoL that questions the how an historic church and modern tower can possibly get along without the church being irreparably harmed, a wonderful example is the 1999 Broadway building in Denver. What is being proposed for the Nye's Block is not nearly as extreme and therefore should be more than possible to execute well and in a respectful manner so long as proper precautions are taken to protect the church structure.

See, now THAT is an example where I can understand why a church may be upset about a proposed development............that's almost blasphemous!

Cool tower though (and cool church)!

Nathan wrote:Yeah. That's a little ridiculous. And look how empty the surrounding area was when they proposed it.

I will NEVER understand it when towers of that magnitude are built on the outskirts of downtown like that! I see that so often with Western U.S. cities, including Houston and Dallas, and some SE cities too, like Atlanta. How can one site's value be only worth a two-story building, while the one adjacent to it merits a 45-story tower? Even in the event of lightning-fast demand increases, I can't understand that transition.

The closest thing to that in Minneapolis is the Multifoods Tower, which has relatively little built to its W/SW, or the Carlyle, but even that isn't surrounded by as many low-rises, and in that instance it makes some sense that a property's value would be higher closer to the river.

^Except that the Multifoods building is right in the densest part of the city and smack between Hennepin and Central. It's pretty much in the core of Minneapolis.

What would have been really out of place was the Duval building.

Ayup. I really do think that the UP tower is a better fit for that site.

As far as the tall towers in the middle of nowhere, I think a lot of times it's the result of a developer doing a bad job of predicting the market. Look at Grant Park and Skyscape, here in Minneapolis. Before they were built, the skyscraper district of downtown was expanding in that direction, and I'm sure it was a reasonable assumption that it would probably continue all the way to 94, so why not get a couple of condo towers going while the land is still cheapish? Those aren't perfect examples, since their neighborhood is reasonably dense, and they aren't that far from the downtown core, but it's the same idea.
Joey Senkyr
joey.senkyr@outlook.com

NIMBY's get their way. NIEBNA tables it's approval until the city conducts an environmental review, which could take 4 to 5 months.

I was at the meeting, and I don't think the Strib article is completely accurate, and I know the opponents don't see it as getting their way. NIEBNA tabled coming to a decision regarding the grievance that opponents filed until after the EAW process is completed. They didn't change anything about their original decision at this point, so I don't think it's fair to say they've "tabled their approval." Currently they officially approve it.

Did parishioners of St. Olaf freak out when the Piper Jaffray tower (now Campbell Mithun) was proposed? That tower might be in closer proximity to St Olaf than the new Nye's development is to Lourdes.

St.Olaf is a much more modern building. Had their original 1880s building not burned down in 1953, there would probably have been some concern. Of course, who in the hell can speak for for parishoners back in 1982? 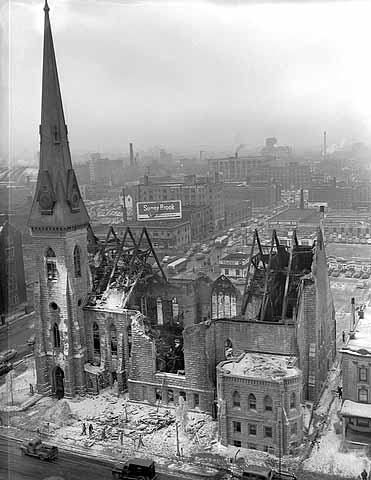 Hopefully now there will be a few more sane people that will help to balance out this anti development chatter. We are not tearing anything historic down. We are redeveloping open asphalt into homes and retail which will make this area stronger.

You'd think the nimbys would remember that the original plan didn't include reuse of the historic Nye's structures.

I also found some of the church leaders' points in the March 20 editorial rather interesting. Regardless of one's position on this specific development, we have to ask ourselves whether it makes sense to render zoning and development decisions on the basis of an existing building's prominence or symbolism. Don't get me wrong, I'm all for historic preservation; I'm glad the Nye's buildings are likely to be preserved, and I'd disapprove of any proposal that would demolish the church. But recognizing property interests in abstract concepts extending beyond parcel boundaries (like being a predominant part of a neighborhood) could lead us down kind of a goofy road.

UrsusUrbanicus wrote:Also, regardless of one's position on this specific development, we have to ask ourselves whether it makes sense to render zoning and development decisions on the basis of an existing building's prominence or symbolism. For something public like a monument, perhaps - but recognizing property interests in abstract concepts could lead us down kind of a goofy road.

One must also ask whether there is a point where totally ignoring existing zoning, small area plans and/or historic designation becomes ridiculous and wrong. I agree the development should move forward but perhaps there needs to be a wider conversation about and effort to change the existing zoning and plans so we don't run into this in the future. If in the end we have that conversation and nothing changes then I think we have to respect that going forward.

People outside a neighborhood do like to make decisions for those who actually live there. I get that we're a city but I try to defer to residents to a degree when I either don't have complete information or I am getting particularly strong pushback from a large percentage of them.

On the other hand, I'm not sure why residents of a neighborhood should have a right to freeze a place in amber. Certainly someone needs to be an advocate for future residents, especially when current ones, living in an already successful area, have little to no incentive to allow new development.

Put another way, of course they want new construction to be stopped. I also want things. I want a billion dollars. I just don't think it's reasonable to expect the government to give it to me for no other reason than I want it.

Which is why I (personally) don't put a lot of stock in small area plans in general, or zoning and historic designation that servers primarily to keep development out. Of course the local residents want that. Doesn't mean they should get it.
Last edited by FISHMANPET on March 30th, 2015, 11:00 am, edited 1 time in total.
Peter Bajurny
peter@bajurny.us
@FISHMANPET
Post Reply
582 posts