twincitizen wrote:At the very least, by the time the next census and redistricting rolls around, the core cities won't lose any more seats in the legislature, which they haven't been able to say for probably 60 years. Whether or not Mpls and/or St. Paul could gain a seat back remains to be seen.

It's almost assured that the losses will come from outstate MN, especially the deeply rural areas.

Kinda hard to see how Minneapolis won't exceed the October 2014 forecasts the Met Council put out there. We're only 13k away from the 2020 number (424,700) with 6 years of growth to go. I wonder how many units are permitted/under construction? There are 3,500 units just in downtown/St Anthony.

There's a whole bunch of units proposed, approved, and under construction in Minneapolis.....it's more of a question of whether or not they'll all be built AND occupied.

If that's all true, that's fairly impressive growth, and much stronger than I was led to believe based on previous population estimates and discussions. Also, it sounds like growth was somewhat stymied in 2010, 2011 and 2012, but started really picking up in 2013. The question is, which year is most representative of the state of the metro in the 2010's? I'm hoping it's more like 2013 than 2010. 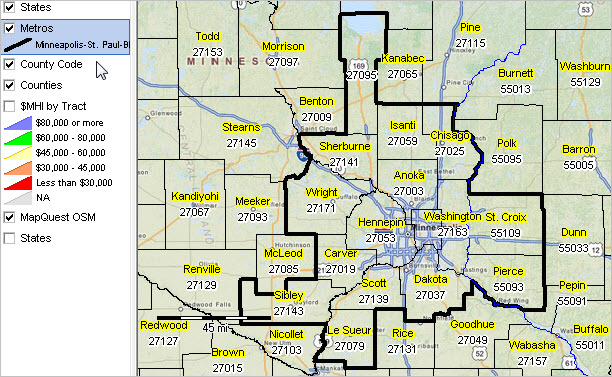 It is entirely possible that the yearly estimates and decennial projections are done with different methodologies.
The annual stuff is probably just a more complex version of: 2010 census + (occupied units added * average hh size).

I'll also note that the future projections have been revised downward not once but twice in recent years. I'd suspect that some inner burbs with booming multi-family construction like Edina & SLP will exceed their projections as well.


A month ago, I wrote:Following up on my posts from last year and earlier, numbers have been revised down even lower in these newly updated 2040 estimates:

Ok, it's just nuts that our MSA...
-Touches St. Peter (across the MN River)
-Includes a tiny sliver of Mankato (northern tip of airport property)
-Includes Maiden Rock, WI but not Red Wing, MN a half hour closer
-Includes part of St. Cloud
-Includes half of Lake Mille Lacs

Any of you spreadsheet jockeys care to whip up a list according to percentage increase? Just curious.

Anondson wrote:Any of you spreadsheet jockeys care to whip up a list according to percentage increase? Just curious.

The Pioneer Press article has a good spreadsheet of the metro counties:
http://www.twincities.com/localnews/ci_ ... since-2010

I don't care what the US Census Bureau says, the "metro area" to me is always the 7-county area. Sure it cuts out some areas that are obviously part of the Twin Cities metro, like Albertville-St. Michael-Otsego-Elk River, but it also includes a whole bunch of farmland in outlying Carver and Dakota Counties that are very much not part of the metro area in form or function. So there's sort of a tradeoff there, but the 7-county area is still about as good a definition as you can get. The rest are all way, way too broad. If there was a definition of the metro that included the 7-county area plus the mostly contiguous suburbanized areas of Wright & Sherburne Counties, I'd go for that.

7-county area just barely missed 3 million... 2,977,455. Ought to be right around or just over 3 mil next year.
That round number makes it really easy to run some quick percentages if you're wondering how large a share of the metro a particular city or county makes up.
St. Paul is about 10% of the metro. Mpls-StP together are still under 25% of the metro (yikes...)

For some reason I believed (and posted previously) that Met Council projections were as of July 1 each year, rather than April 1 like the decennial Census. Obviously keeping it on April 1 makes way more sense, for consistency's sake.

Can anyone find hard evidence that Met Council's estimates are indeed taken on April 1 of each year?

Also, I'll just remind everyone that the numbers released today are
A. Preliminary, subject to review by each city/county. Final #s come out in July I believe.
B. 2014 estimates, meaning that the numbers are already one year old. Fast growing cities can probably be extrapolated if you're dying to make a guess what the population is right now in this very moment.

EDIT: Here's the methodology for the annual estimates: http://www.metrocouncil.org/METC/files/ ... 8c97df.pdf

Alright here you guys go. Sorry it took a while.

It's true that multi-family construction didn't really get going until 2012-13 (very few projects were under construction when UrbanMSP started in June 2012). However, looking across the 7-county region (the numbers you posted) you have to think about the thousands of vacant and foreclosed homes that were available throughout 2010-today. There was a ton of existing housing stock sitting unoccupied at the tail end of the recession in 2010.

If you look at Minneapolis specifically, the 2013-14 growth of 10,348 smokes the 2010-13 annual average of 6,120. Those numbers support what you were expecting - tepid growth post recession and much more rapid growth in the last year or two. But yeah, region-wide I would guess that the multifamily explosion still pales in comparison to the number of existing units that have been occupied (driving both single-fam and multi-fam vacancy rates to all-time lows). Even in Minneapolis, I'm sure that a significant share of our recent population growth has been accommodated by driving down vacancy rates at existing apartments. For example, if there are 100,000 existing multi-family units in Minneapolis and you drive down the vacancy rate from 6% to 2%, that's 4,000 units occupied.

So the Census Bureau and Met Council are each doing independent annual estimates? Down to the City level? Why?

twincitizen wrote:MPR with a story, which apparently uses US Census Bureau estimates (and July 1, 2014, not April 1...apparently): http://www.mprnews.org/story/2015/05/21/census-data

So the Census Bureau and Met Council are each doing independent annual estimates? Down to the City level? Why?

Wonder who has the history of greater accuracy for twin cities growth estimates. Gut feeling, the Met Council.

I suppose they're already doing modeling to track growth, so it doesn't take much to have the spreadsheets spit out a report once a year.

For the future projections, looking out 20, 30 years, I believe someone here said Met Council had the better track record, though both definitely missed on 2010 outlooks - as Mpls stagnated and St. Paul shrank.

As for the annual estimates, in this particular instance it appears the Census is a little more conservative. That MPR story has a lower numbers for Mpls (407,207) & StP (297,640) than Met Council did.

MPR has an interactive map which you can click around to see each City's estimate.
Here's a .CSV file you can download with each year's census estimate if you really want to geek out: http://www.census.gov/popest/data/citie ... 014_27.csv

On a ranking of the largest cities in the country, Bloomington just toppled Duluth in 2013, but also apparently lost 83 people 2013-14:

And Minneapolis has some interesting company:

St. Paul has some interesting company too: