According to the lawsuit, every day without the data costs the Sanders' campaign approximately $600,000 in donations.

That's a big fundraising number. Apparently the DNC is supposed to give written notice at least 10 days in advanced before terminating access, so they're rather directly in the wrong there. Further, the contract between the DNC/campaigns indicates that even with the 10 days in advance, there is no contractual reason to suspend access. Talk about nailed on a cross.

Also, the Clinton campaign's communications director (or whatever the position is called), besides saying (live on national TV (CNN)) that the Sanders campaign has been running negative attack ads for 2 months (they haven't), also claimed that the Sanders campaign commited what would be grand larceny, exporting/saving/downloading large sums of expensive data. The former is certainly blatant and easily disprovable lying, and the DNC/Hillary campaign has released varied accusations of the latter to the media, but has been skimping on the evidence.

From a release from the Technology company itself: http://blog.ngpvan.com/news/data-security-and-privacy

Updating with additional information and clarification:
First, a one page-style report containing summary data on a list was saved out of VoteBuilder by one Sanders user. This is what some people have referred to as the “export” from VoteBuilder. As noted below, users were unable to export lists of people.

And it should be noted that a single-page "export" wouldn't provide useful data, but would probably be used to demonstrate an IT problem.

On Wednesday morning, there was a release of VAN code. Unfortunately, it contained a bug. For a brief window, the voter data that is always searchable across campaigns in VoteBuilder included client scores it should not have, on a specific part of the VAN system. So for voters that a user already had access to, that user was able to search by and view (but not export or save or act on) some attributes that came from another campaign.

Yeah, it sounds like this system lets you save data within the system, but exporting anything more than screenfuls isn't very feasible (or at least the actions that occurred on Wednesday didn't include any large-scale data exports).

There are a few online petitions floating around to encourage the DNC and the vendor to reinstate access by the campaign. One hosted on MoveOn.org is up past 245,000 signatures at the moment, which appears to put it among the 20 most-signed petitions on the site (not bad for something that probably hasn't even been active for 12 hours yet). They're hoping to get half a million signatures by the time of the debate tomorrow night.
Mike Hicks
https://hizeph400.blogspot.com/

The DNC capitulated after being threatened with legal discovery of their internal communications (given that those would likely be incriminating).

I'm curious as to how this proceeds. I'd take it the DNC wants this gone ASAP (and probably Hillary's campaign as well, considering how they've toned down their rhetoric), though with the debate tomorrow it'll be around for at least a few more days, and Bernie's campaign could potentially gain something by pushing the issue. If this does actually become a protracted legal fight I don't think the release of internal DNC documents would happen soon enough to influence the primaries (though that doesn't mean it's out of the question or impossible).

I *Really* hope Bernie can conclusively and unambiguously address this all at the Debate, because the Media's coverage has been completely technologically illiterate, and has spread a ton of misinformation.

Lindsey Graham has dropped out today, or at least suspended his campaign. That still leaves 13 Republicans at this point.

The Democratic debate was alright. The database issue that flared up on Friday seemed to be doused as soon as Sanders apologized to Clinton about it. There wasn't anything that stood out to me as a huge gotcha moment, but that's not what debates are really supposed to be about anyway. Sanders felt stronger and more steady to me. O'Malley fought for as much speaking time as he could get.

I saw a number of people complain on Twitter about a lack of any questioning about climate change. This has also been mentioned after previous debates, and I've been ambivalent about it, but the issue was more relevant this time around because of the recent Paris agreement.

Unsurprisingly, this debate had the lowest ratings of any so far this year, though apparently it's still better than the primary debates in 2008 and 2012. Hey, at least they beat that rerun of NCIS
Mike Hicks
https://hizeph400.blogspot.com/

I saw a number of people complain on Twitter about a lack of any questioning about climate change.

Not just that, but ABC rejected a clean energy ad while allowing fossil fuel company ads.

Apparently Planned Parenthood just endorsed Hillary Clinton, and there's an uproar. They're blocking people and w/e else on Twitter and elsewhere, which isn't helping.

That does not sound like something that should surprise anyone.

Yeah I'm confused. Such a weird time we live in, Planned Parenthood is public enemy #1 to a certain sector of the population.

Sounds like Hillary has been using state democratic parties to 'legally' launder money to the DNC for herself in the Primaries and/or the general election. Hooray for the Supreme Court legalizing bullshit! (this time in 2014)

Sacrelicio wrote:Yeah I'm confused. Such a weird time we live in, Planned Parenthood is public enemy #1 to a certain sector of the population.

I don't know that it's public enemy #1, but [bogus statistic removed by moderator]


As far as the presidential election is concerned, I am seriously considering abstaining -- and in general I am against abstaining in such an election but I cannot stomach pretty anyone running on either platform. Out of a Clinton, Trump, or Sanders presidency I find myself concerned about the direction of this nation. I guess Clinton is the least appalling out of the bunch, but then I remember that she's the biggest liar of them all. Ugh.

She's only the least appalling if you find the influence of big corporate money in politics totally acceptable.

And find continued spying on US citizens totally okay.

trigonalmayhem wrote:She's only the least appalling if you find the influence of big corporate money in politics totally acceptable.

I find her to be the least appalling because she is the least extreme on most of her positions, even if she's the most dishonest candidate of them all.

Bernie Sanders is an utter moonbat whose economic positions are completely divorced from reality. My guess is that Sanders is popular among the left for much the same reason that Trump is popular on the right: a recognition that businesses exert undue influence on the American political system through crony capitalism.

Trump’s vision requires that we enforce our immigration laws, exterminate the poison of political correctness, embrace the meritocracy, and implement tax & regulatory reforms that keep the crony capitalists in check. Sanders’ vision ignores the cultural aspects, and rather than constraining the influence of crony capitalists, does away with them altogether by centralizing the banking sector and other industries to directly control the distribution of wealth. Both possess extreme revolutionary visions, and I’m not sure that outside of the bases of the parties, those who find either candidate appealing are cognizant of the differences.

Have you done the math and seen how disproportionately our money is spread in government? And how much wall street gets away with? 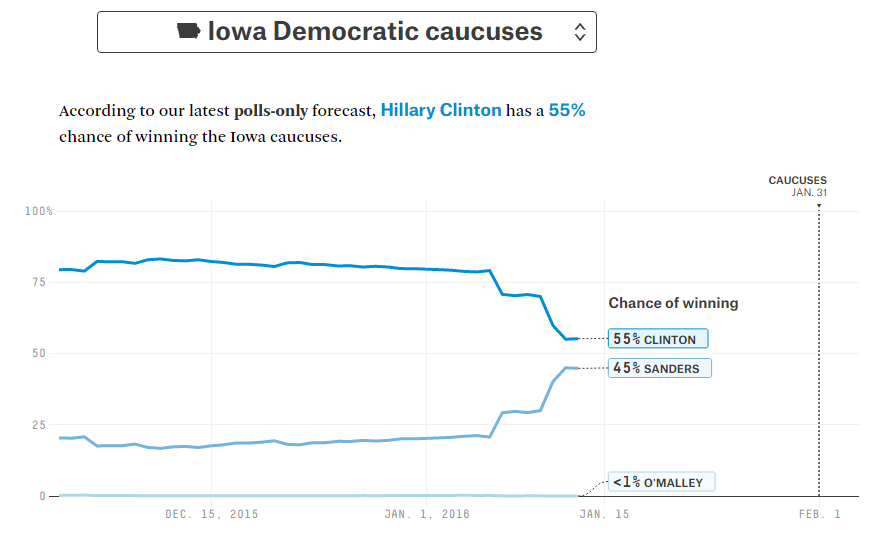 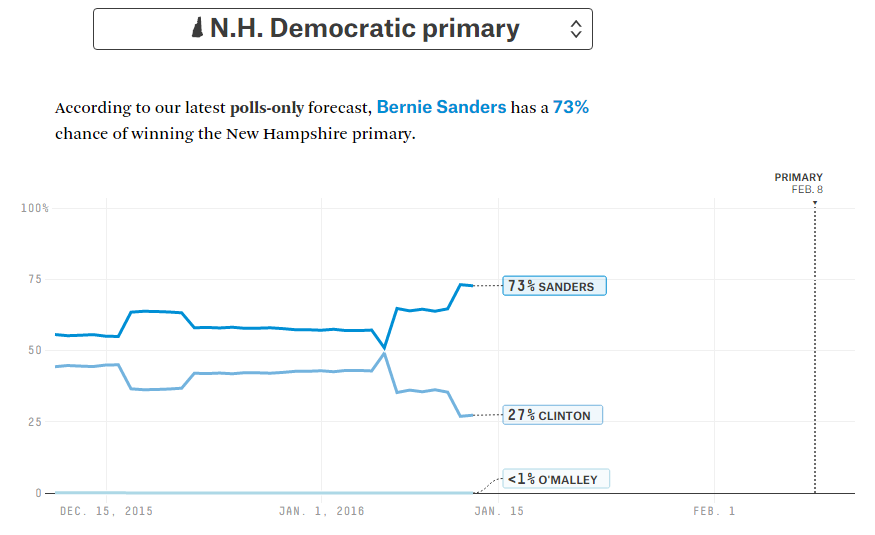 Noted in their articles: The Polls+ is weighted with endorsements, but that weighting gradually dissapears as the caucuses approach, and will converge with the polls-only prediction (which says it's a toss-up right now).

Also of note: Sanders is now polling at around 40% nationally, enough for wins in Iowa and New Hampshire to push him into the lead.

Chelsea Clinton Said Bernie Sanders Would Take Health Care From Millions
But there are a few things she failed to mention.

at40man wrote:Bernie Sanders is an utter moonbat whose economic positions are completely divorced from reality.

while Sanders wants to jettison the current system by resorting to internationalist socialism.

Sanders’ vision ignores the cultural aspects, and rather than constraining the influence of crony capitalists, does away with them altogether by centralizing the banking sector and other industries to directly control the distribution of wealth.

uh, what? have you actually read his platform? He's a Social Democrat.

Only in the United States of DONALD TRUMP FUCK YEAH would Bernie be considered "an utter moonbat whose economic positions are completely divorced from reality".

You can look at his opinions and history on any subject you want, courtesy of some programmers who got together months back and compiled his entire record onto a website, a great unexpected gift to Bernie's campaign.

When the first Republican ad airs juxtaposing Bernie quotes with Mao and Stalin quotes, I'm sure "but I'm a social democrat" will be a real effective counter in suburban Ohio.

at40man wrote:I don't know that it's public enemy #1, but given nearly 40% of their profits come from abortions it is heinous that poor women often have no other choices for medical services than to go to an institution that has a vested interest in convincing them to kill their child.

I have no idea how you got to that number. About 15% of their revenue comes from abortions.

But I agree that poor women should have more options for health care. Unfortunately, the right first made sure that health care was extremely difficult to obtain, thus forcing more and more women towards Planned Parenthood as their only option. And now they are trying to eliminate that option. Here's to hoping we don't end up with Cruz or Bush or even Kasich (http://fivethirtyeight.com/features/joh ... on-access/).

Maybe if we just followed what Colorado did..