TroyGBiv wrote:I think this is on topic... The 90's has been around since I was - well it's been around a long time

Found some history in the City Pages:

A quote from a prior owner:

The underground tunnels when we owned the place used to go all the way to the courthouse. When we first bought the bar, we walked through the tunnels.

It would be an interesting feature to connect the 90s building to the Marriott via tunnel!!

Construction of this building is coming along nicely. They are already pooring the 4th floor. There is not a lot of wasted space on this property. They are constructing this building almost right up to the Lumber Exchange building. I'll try to snap a picture the next time I go through here.

It's fun to watch this, as it is a tight fit. Like the Hampton Inn on 1st Ave.

I was in the area so I stopped for a photo. 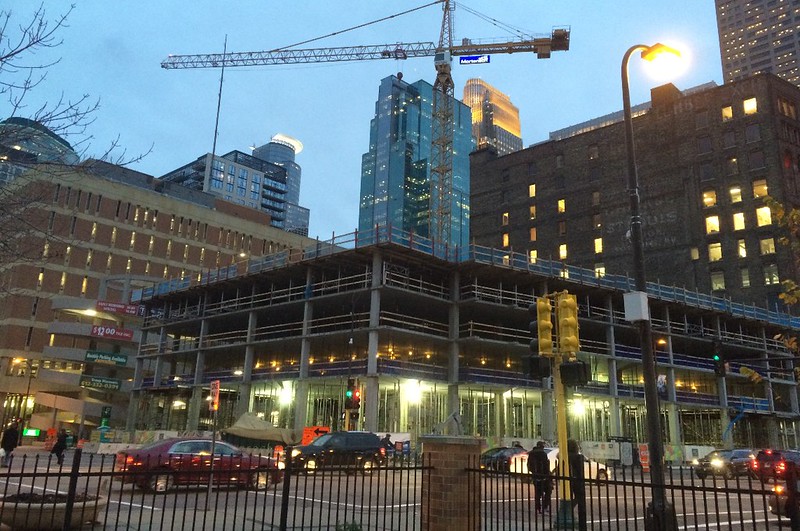 I'm pleasantly surprised that this is all cast-in-place structure. I assumed that this would be the same weird light-gauge steel structure as the Hampton Inn.

So, did they have to cut a deal with the owners of the Lumber Exchange for blocking their windows, or is that the risk you take when you cut windows into your zero-setback building wall? For the sake of all the other empty lots on Hennepin with similar windows in neighboring buildings, I hope it's the latter.
Joey Senkyr
joey.senkyr@outlook.com

I think they're setback a foot or two at the front portion of the building. The other windows face the interior courtyard. When the Andrew's was around, there was a small 1 story building between. It's possible the Lumber Exchange has always had those windows.
Q. What, what? A. In da butt.

Silophant wrote:So, did they have to cut a deal with the owners of the Lumber Exchange for blocking their windows, or is that the risk you take when you cut windows into your zero-setback building wall? For the sake of all the other empty lots on Hennepin with similar windows in neighboring buildings, I hope it's the latter.

It's possible there is a restrictive covenant or easement that burdens land on which the AC Marriott is being built which could prevent full blockage of the windows. However, that would not be the default. In order for there to be some prohibition on blocking the windows, the current or past owners of the buildings would have had to contracted not to block the windows (in exchange for money no doubt). Such an agreement would "run with the land," and subsequent purchasers of the burdened property (the AC Marriott in this case) would theoretically pay less for the property as a result of the restrictive covenant/easement.

However, in reality, I have no idea how common a restrictive covenant/easement would be in this context.

With the wrap I can't count the stories. How many more until it tops out?

It's at 9, there are numbers on the elevator doors!

This is the view that keeps blowing my mind. Coming into the city in 4th used to be so barren. And now look! Not necessarily super beautiful, but definitely dense.

Unless they are still pouring the roof, I think that it was topped off last week. Now it is all finishing work from here on out.

Maybe I'm overly optimistic, or maybe I'm completely crazy... But I feel like the design has changed since we last saw renderings. It seems there's a set back (where there were none on the last rendering) that heads straight back rather than runs at the angle following Hennepin, as well as some different configuration of things at the corner?

I wonder if that's just how the structural support is laid out? Like ... the majority of it is aligned to the cross-street and just the wedge along Hennepin is constructed after the rest of the floor maybe? So for the top floor there's no need to put the extra supports up or something? /not a structural engineer

Nathan wrote:This is the view that keeps blowing my mind. Coming into the city in 4th used to be so barren. And now look! Not necessarily super beautiful, but definitely dense.

I always hated that view before: a big billboard, that stupid spiral ramp, the ramp on Nicollet, and then crap behind. This new view is soooo much better.
The problem with being an introvert online is that no one knows you're just hanging out and listening.

Mortenson is building what looks like a really beautiful AC Marriott Tower in Portland... I guess they're worth better construction?

It does look better yes, but "tower" is a bit generous, its only 40 feet taller than this one.

So, 3 - 4 stories more? The real question is what's the difference in rooms?
Urbanist in the north woods

I'm less concerned about the height as I am the type of construction and the quality of the design and materials.
Post Reply
354 posts