TroyGBiv, your Paris examples are really troubling. Haussmann's redevelopment of Paris displaced thousands of people, caused massive social disruption, and had the ulterior aim as a creating an urban design that made it easier for the military to put down the city's frequent armed uprisings emanating from the city's working class. Meanwhile, yes, Paris is a very expensive city, and the region's poor and marginalized mostly live in the suburbs. Do you perceive the social dynamic therein to be a normal, good thing -- what with the severe societal division, and the occasional massive riots over the lack of opportunity and connectivity in those suburbs?[/quote]

No - the Paris example is the other extreme... my reference was that downtown Minneapolis was wiped out during the "Urban Renewal" movement of the 50s and 60s and that there have been many efforts to "market" downtown to encourage people to move back downtown. The Paris example is to make the point that any one extreme is not good for a healthy metropolitan area. That is why I reference diversity to include income diversity... I would love to see an increase in "tax paying" residents in the city... we have so many properties that are not on the tax role that takes potential funds away from schools and other city amenities (group homes etc.)... If we can increase the urban population we will see a healthier city... and if some of the suburbs would improve their policies to provide options for a diverse population we here in the city of Minneapolis might not have to bear the disproportionate burden of drug treatment centers and group homes and half way houses for sex offenders... etc... Whittier, Stevens Square, Phillips and downtown bear the heaviest burden for the entire Hennepin County population... and much of the state of Minnesota as well. This forum can be a great way to discuss the myriad of issues that we face in developing and growing out cities. (and no - the french are horrible people - except for their baked goods)

This has been, and is becoming more of a problem! The city has to stay safe to grow. It's been pretty bad lately, it is disappointing...Lot's of things to address to fix the problem.

Looks like Symphony Place is repositioning itself as Bolero Flats.

I can't say I found anything unique or interesting about these apartments apart from the Nicollet Mall view when a friend lived there 10 years ago. His unit was bordering on needing a major overhaul.

Yeah, I toured the building a couple years ago when I was looking to move and it was spectacularly unimpressive.

MNdible wrote:Have we really let Beige take over two threads now, neither of which are more than tangentially related to the topic that he insists we discuss with him? Mods, please relocate these to an appropriate thread in Anything Goes and clear it out of here.

I don't insist you discuss anything with me. All I did here was post one thing that was relevant to the thread, and wrote a little paragraph of thoughts about what it means. What's fascinating from my perspective is how there seems to be a little clique here who patrols every single thread and immediately has to offer endless paragraphs of counter-argument to what it views as heretical dissent. Feel free not to reply to this.

I'm not opposed to market-rate construction as a principle, but my concern is that with every day that passes under the status quo, a) available land decreases, b) available land becomes more expensive, driving up what "market-rate" means and making affordable housing construction even less likely, and c) people are displaced from the city (for the non-luxury market, rising rents + static supply + increasing population = displacement. It's not that hard to see in the abstract). I'm less interested in stopping particular projects than I am in trying to raise awareness that the whole development paradigm as it stands is a policy failure. I wish people who claim to care about equitable growth in Minneapolis would speak out against it more, instead of doing mental gymnastics to convince themselves and everyone else that it's the least-bad option or whatever.

Likewise, my objection to your points is that you seem more interested in shutting down these conversations, telling me how my suggestions are "vague," "on a scale never seen before in this country" (which isn't even remotely true, by the way), or otherwise impossible. What I would hope for is that public support for affordable housing construction can be discussed as something that is within the realm of possibility. Remember how as recently as a couple years ago, a $15 minimum wage seemed laughably outlandish? It's now the reality in several major U.S. cities and a major platform point for city council members in Minneapolis as well as leading U.S. presidential candidates. The same could easily happen for public housing support. The first step is for people like you, who claim to care about affordability and equity, to not feel the need to shout down the suggestion. (Unless you have more deep-seated ideological objections, which your deeming my proposals "communist", for example, seems to suggest.)


FISHMANPET wrote:if you're concerned about induced demand due to new housing, then I guess we're back to the idea of keeping a place crappy so nobody else moves in. Emphasis on the else since you missed it last time.

This is still exactly my point. There are still thousands of people who would LOVE to move to just about any neighborhood of this city (except maybe parts of the Northside) in their current "crappy", luxury-high-rise -free state. Yes, obviously, we will need more housing to accommodate them. But if you're the type of person who views Minneapolis as "crappy" unless it's full of amenities-laden luxury high-rises, I don't see why housing policy should cater to you primarily. Or really, at all.

acs wrote:Meanwhile, a proposal the HPC is much more likely to approve:
"Makeover planned for Lakeland Building"
http://www.journalmpls.com/news-feed/ma ... d-building 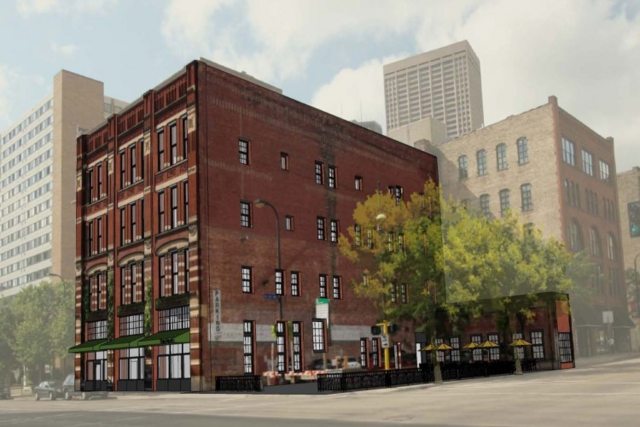 Glad to see this building finally getting fixed up and put to a better use.

There must be some very high ceiling in this building. Could not figure out how they were going to fit in 2 story lofts on the 4th floor, until I saw the height difference between the front windows to those on the side of the building.

Instead of the open lot, I wish we were getting a glassy annex attached to the historic building. Alas, this will do!
Q. What, what? A. In da butt.

With the windows from the old bathhouse building next door that look on the parking lot also. The parking lot may be historical and they can't build on it!!

I missed it if this has been posted, but according to a Strib story I just read Mill City High School has closed (after 2 weeks).

Has anyone seen the plans or a display for the renovation to the 100 Washington plaza? There are some heavy duty barricades up and very limited access to the buildings front door. Looks like the east portion will be done first with the west being done once the east is completed. Hoping for more green space is possible instead of the concrete slabs of the present configuration.

Article doesn't say exactly where the location will be.

Interesting that they chose Minneapolis over say Chicago first?

This looks about ready to open in the old Blick's space at 16th and Hennepin. Interesting location - I figured they would have been a good fit for MC2.
Joey Senkyr
joey.senkyr@outlook.com

A few years ago, there was a proposal to build a new hotel on the Hotel Ivy block (either replacing the Holiday Inn Express or using the surface lot along 12th). What ever happened to that? I can't even find the thread.

Wedgeguy wrote:Has anyone seen the plans or a display for the renovation to the 100 Washington plaza? There are some heavy duty barricades up and very limited access to the buildings front door. Looks like the east portion will be done first with the west being done once the east is completed. Hoping for more green space is possible instead of the concrete slabs of the present configuration.

Well, sadly they took out a bunch of green space and some of the only mature trees in this part of town to do this "renovation" that basically replaces them with new grass and small trees. They weren't Ash trees that will die either, it was a nice green space on the north side of the building.

Wedgeguy wrote:Has anyone seen the plans or a display for the renovation to the 100 Washington plaza? There are some heavy duty barricades up and very limited access to the buildings front door. Looks like the east portion will be done first with the west being done once the east is completed. Hoping for more green space is possible instead of the concrete slabs of the present configuration.

Well, sadly they took out a bunch of green space and some of the only mature trees in this part of town to do this "renovation" that basically replaces them with new grass and small trees. They weren't Ash trees that will die either, it was a nice green space on the north side of the building.

one of my best friends works in the building.

The water proofing under the plaza was failing and needed to be replaced.

They're using this time that they had to dig up the plaza anyways to do an addition.

They are adding a glass curtain wall to the Washington side with a new skyway entrance and what the plan says is street level retail.

They're creating an outdoor seating area and doing some new landscaping.

Sounds like a pretty significant change. 100 Washington is a Minoru Yamasaki building. Is this renovation sensitive to its historic design?

I take it no PDF or design diagrams of this project yet.

I was worried about that...

In the plans, it doesn't actually show tearing down or destroying any of the structural features, or removing any of the original materials, they're basically adding a giant glass box under the over hang to add lobby and retail space.

*there are renderings and site plans and explanations of the renovation in the document.
Post Reply
1760 posts